We thought we’d seen some impressive drone flying before… 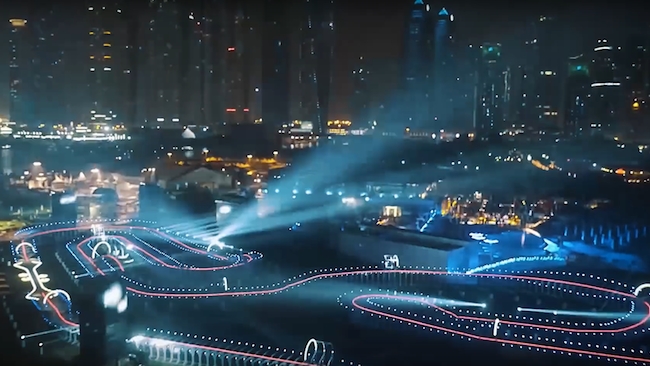 The floodlit course in Dubai

There have been some wonderful films made by drones, many of which show off extremely impressive flying skills. But, as the saying goes, you ain’t seen nothing till you’ve watched footage from the first World Drone Prix.

Held in Dubai, the first World Drone Prix was held on a custom-built outdoor track and won by British teenager Luke Bannister who flies for the UK-based Tornado X-Blades team. In doing so he managed to beat 150 other pilots and net himself a cool $250,000 in the process.

In other words, drone racing is becoming big business, and in Ars Technica’s excellent photo essay on the subject you can see why. It’s a high-tech floodlit marvel, a cross between Scalextric and the classic Playstation game Wipeout, featuring viewing stations dotted round the track with first-person-view goggles for a full-on pilot’s eye experience.

It was a sophisticated event as well, featuring moveable track parts, enough laps and distance that a pit stop was needed for battery changes, and some by all accounts spectacular action and equally spectacular crashes.

This is just the start too. Organisations in both the UK and the US are planning major events as 2016 unfolds, and then there are the World Drone Racing Championships to be held in October in Hawaii to look forward to.

Speaking after he’d won, Bannister said what he was looking forward to most was “Flying in a nice, quiet open field.” Have a look at the video below and you can see why.