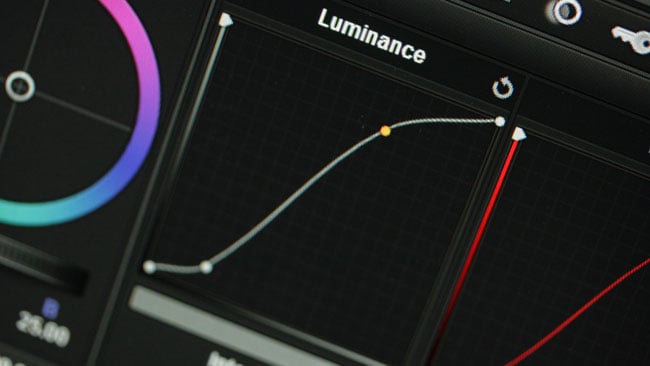 Filmmaking is simple, uncomplicated and requires very little planning, Right? Now that the laughter has died down, here's a basic primer for log workflows, including why and how they are used.

Modern camera technology is making filmmaking more complicated and in ways that aren't always absolutely necessary. In the last ten years or so, it's added to the work of the camera department to the point where an entire additional warm-bodied human, the digital imaging technician, is sometimes required to make the best of the available equipment.

One theory says that the DIT is doing the job of people who were previously at the lab and that the overall production headcount is similar, but it remains the case that people with even a tip of a finger in the technical side of film production will find it difficult to avoid involvement in the world of LUTs and log standards. Arguments about the necessity of it aside, as with any discipline involving people and complex technology, planning is key to success. 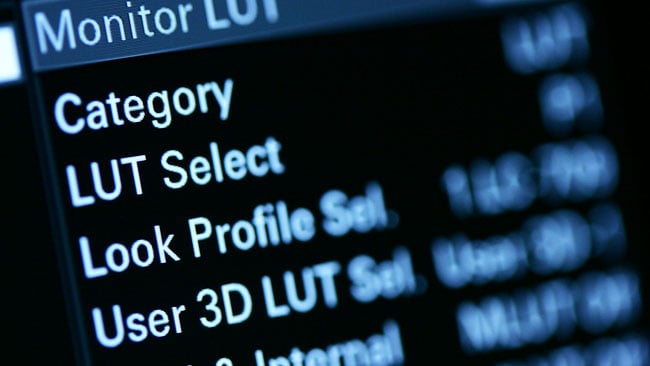 This, then, is a basic primer on implementing log workflows for people who may not have done it much or for people who want to understand the broad strokes so they can follow along at technical meetings. In particular, it should become obvious why it's OK for monitors to look slightly wrong, very wrong or even nothing even remotely like a reasonable picture, at least under some circumstances. 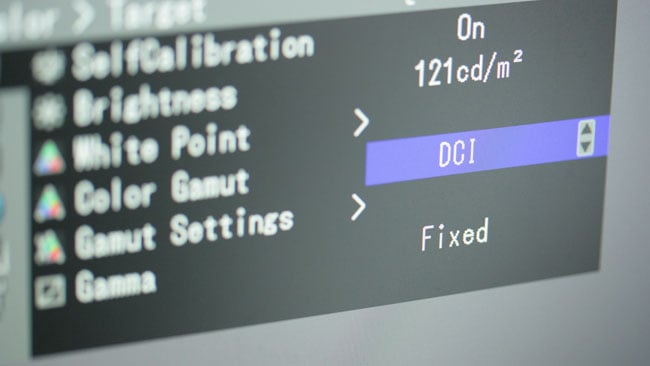 Despite the advanced colour settings on some monitors, few are designed to directly view log material.

Log workflows are all about recording pictures that look wrong, in order to better facilitate them later looking right. Or, well, is it? Not really. If we shoot with a Sony FS7 in SLog3 and look at the picture on a conventional monitor, it will look terrible – flat, milky and lacking in contrast. But what we're really doing there is viewing the signal wrong. If we messed with the controls on any monitor, we could make the picture look ridiculous – all red, all blue or whatever.

What we're doing there is viewing a quite-correct SLog3 picture on a quite-correct conventional video display and expressing concern when it doesn't look normal. Well, of course it doesn't. It's like trying to view a film negative. The colours are back to front and it's orange, but it's not wrong, it's just not designed to be viewed that way. 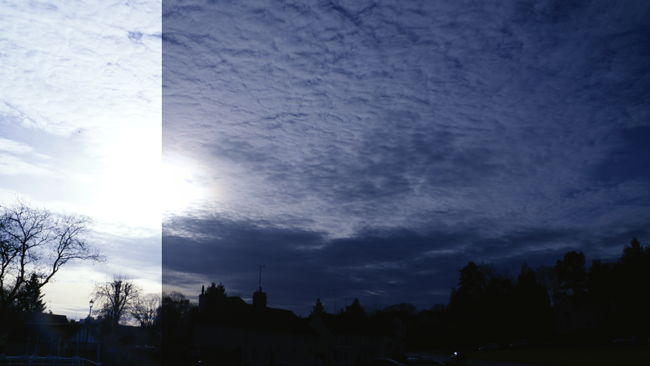 With proper use of log recording, recovery of more highlight information (right) from the original image (left) is possible.

But okay, let's allow the shorthand that log pictures look 'wrong' when we view them uncorrected on conventional displays. The purpose of these relatively unsaturated, very low contrast images is to provide lots of room for things to be very saturated or very bright and to ensure we use the digital information in the file to describe the image in a way that's most effective.

Different manufacturers have different ways of doing this which tend to be selectable in a camera's menus. Sony offers choices like SLog2 and SLog3, whereas Canon call its presets Canon Log. Blackmagic often offers just the choice between 'video' and 'film', where 'film' is the flatter, less colourful option; this might be seen as a reasonable and useful simplification. Some cameras have different varieties of 'flat and grey' and the choice needs to be agreed between the camera and postproduction people. Post needs to know which of the manufacturer-specific options were used. 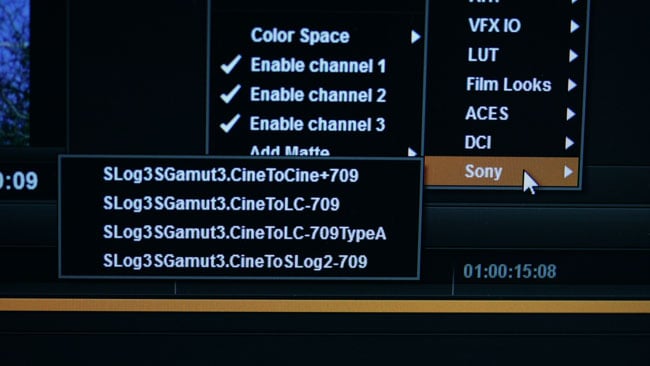 Surprisingly, that, in extremis, is it. You can, if you're sufficiently desperate, monitor the log footage, understanding why it's grey and flat, and then finish the movie normally, trusting in the eye of the director of photography and the proper setup of the postproduction facilities that the finished film will look good. Usually, this would be done using some test and measurement devices to verify exposures, but at this point the formal requirements of a log workflow have been fulfilled.

Much more often, though, processing will be done to make the monitors look more normal. Often, this is a feature of the camera, most of which can output a normalised image for monitoring while recording a log one. Some monitors, or boxes that sit between the camera and the monitor, are capable of doing this processing independently.

Exactly what processing is done is a matter of selecting a colour correction to be applied to the image. These colour corrections are referred to as lookup tables – LUTs or cubes, in common parlance. At the very least, a normalisation to the Rec. 709 standard, which defines how standard video monitors work, will be done, which may often make the output of the camera look very much like a conventional television picture. This can look harsh and rather like broadcast TV, so some cameras provide for artistically tweaked versions of the same thing, for a more subjectively pleasant look.

A more advanced topic is the use of a manually-adjusted LUTs, created in software such as Resolve, which may attempt to make the image look more like the director of photography's final intent. This is not particularly difficult to do technically, but it does have some important implications. Some cameras allow these to be uploaded or, again, they can be loaded into the monitor or a box between the camera and the monitor. 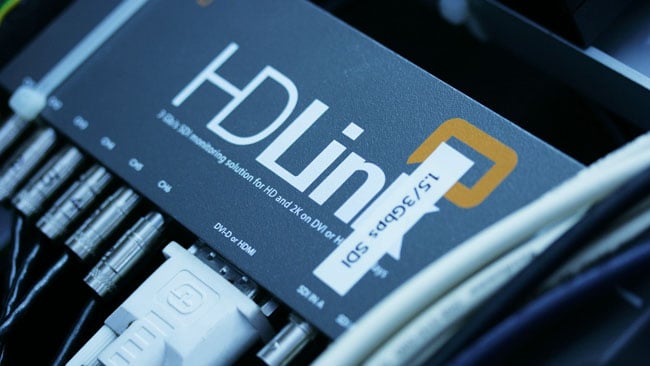 Devices such as Blackmagic's HDLink can sit between camera and monitor, providing approximate colour correction in real time.

There are two key things to remember here. If the director of photography is working to a monitor using a custom-designed LUT, the design of that LUT (which is often done in software such as Resolve) may directly influence decisions about exposure and lighting and should not be taken lightly. Often, camera crew will flip between the unprocessed, low-contrast version of the image and the processed version or refer to technical measurement tools, to ensure things are right without being entirely subject to the decisions made when designing the LUT.

The second thing to realise is that any such on-set image is often an approximation of the cameraman's intent. This is one of the most crucial realisations for non-camerapeople to make about log workflows: it doesn't work like television anymore. In fact, it's more like a 35mm film shoot, where the black-and-white, flickery picture on the monitor is a rough guide to what'll be in frame, but not necessarily more than that.

If we're lighting to a monitor using a LUT that everyone will get used to, that LUT often needs to go to postproduction such that colour grading can, at least optionally, use it as a starting point. Even during the shoot, low-resolution copies for the editor are sometimes made from the high-resolution camera originals and these must generally use the custom LUT, so that rough copies look more like they're intended to look.

This situation can become quite complex if there's a desire from the director of photography to use different LUTs for different scenes or parts of the production, in order to create different looks. Some cameras are capable of recording unprocessed log footage which is linked automatically to a LUT, but it's often best not to assume that refinements like that will be supported everywhere in the chain of equipment and software that can be involved. A significant amount of admin can be involved to ensure everything comes out as it should. 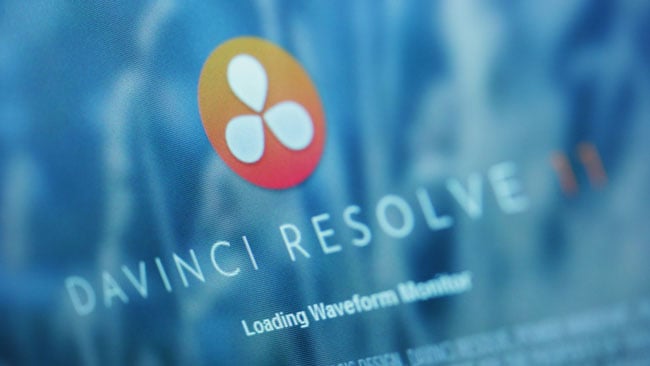 Getting creative in Resolve can make the on-set monitors look spectacular, but don't get carried away.

This article intentionally glosses-over certain things which may be part of modern colour workflows, particularly monitor calibration, which may require a complete second layer of colour correction for each monitor, in order to ensure consistency between various displays. This is most important in postproduction facilities, though; on set, as long as it's borne in mind that the monitoring is at best a rough guide, quite large inaccuracies can sometimes be tolerated.

Clearly, a conversation about all this needs to take place before photography begins, involving at least the relevant members of the camera and postproduction teams. The upside is that recording a low-contrast picture with a lot of information in it means that many decisions can be deferred to post and mistakes are rarely destructive unless they involve a LUT that's later used as a basis for lighting decisions. That LUT, therefore, requires careful testing in all of the anticipated shooting scenarios and a suitably paranoid director of photography will double-check it on the day using other approaches.

But most importantly and, if this article communicates nothing else, it's crucial to realise that what's being shot won't necessarily look right and may look alarmingly wrong on the day and, even if it doesn't, it may still look very different once it's finished - and all of that is very often okay.