At work with the Steadicam M-1 rig 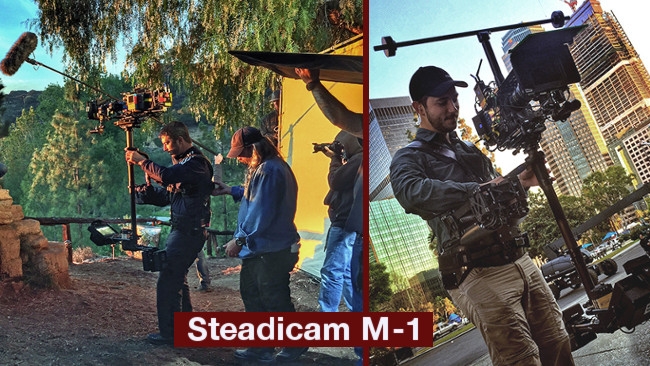 With permission, we're reprinting Steadicam owner-operator Neal Bryant's Facebook post on getting acquainted with his new Steadicam M-1 rig on the set of Crazy Ex Girlfriend.

About a month ago, my new M-1 was delivered to me, and I put it to work right away. I put a lot of thought into this purchase, and I must say, I couldn't be happier with my decision.

Currently, I'm working on Crazy Ex Girlfriend, a one hour musical comedy show on the CW network. The Steadicam has been a great tool for us, with some of the musical numbers really allowing me to spread my wings and fly the rig in fun ways. The fast pace of television demands a rig that configures quickly, and the M-1 has been able to give me exactly what I need, as soon as I need it. 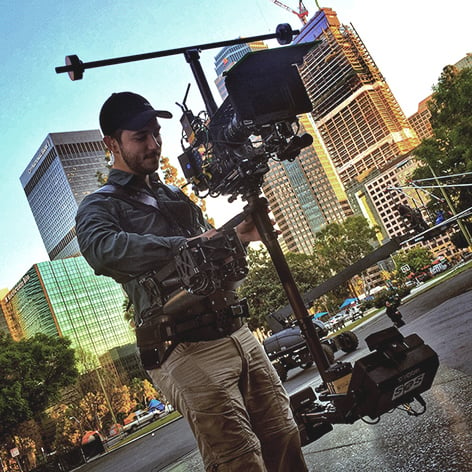 Fighting the wind for a long walk and talk on the CW's Crazy Ex Girlfriend US series.

For me, what immediately stands out about the sled is I have the ability to position the masses anywhere I like. I can have the monitor high and the batteries low, or I can make the rig completely coplanar, all in the span of about 30 seconds. I no longer have to settle for a monitor position in low mode that is any iota less than ideal. Because of the extreme low profile base, the rig is almost all centerpost, maximizing the extension while also being able to go compact. It can be big or small, depending on what camera I'm flying. The monitor can be mounted quickly to either post, but it leaves no clamp rings behind. Instead, they have gone with plastic sleeves that snap on/off the centerpost and provide a barrier between the metal clamp ring and the carbon fiber post. 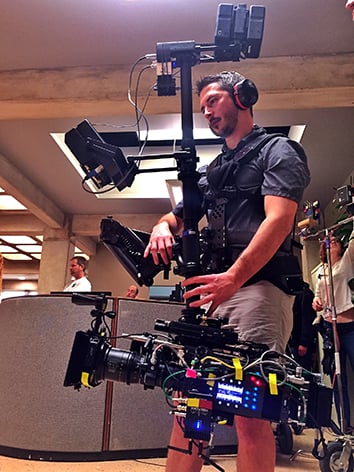 Low mode for a musical number, but with a terrific monitor position.

It's obvious right away that one of the main focuses of the M-1 was rigidity. The monitor and battery mounts, while being able to swivel vertically, are bombproof, and the sled feels rock solid with the thicker post diameter. I've done running shots in both high and low mode, with long, heavy builds, and I've yet to detect any vibration whatsoever. And of course, having the post and monitor mount indexed takes all the guesswork out of lengthening the rig or going into low mode. 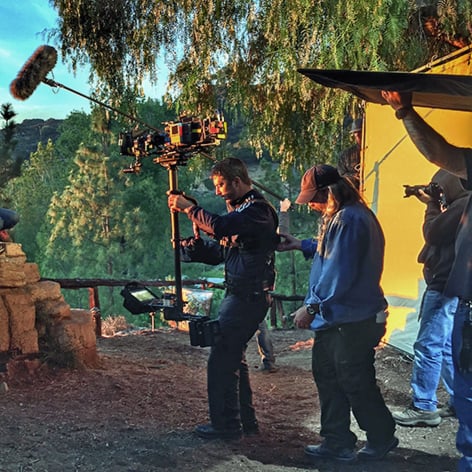 Using the M-1's impressive post length to get the lens exactly where it needs to be to catch the sunset.

The new vernier tilt head is a big improvement. While I have always been a fan of the tilt head on other Tiffen rigs, it was a bit cumbersome for me to set the tilt while I was wearing the rig. Now, I just open the two locks with my arm hand, and dial in the tilt the same way I would dial in the trim. I can stand at a certain mark, during rehearsal, quickly get it right where I want it, and just lock it right back up.

The camera assistants on my current show really like the new dovetail lock. Drop in the camera, hear a *click*, and close the lever. No guesswork, no tools, and it's instantly positive. Battery changes are a little simpler now as well; because the 12/24 and on/off switches are now two separate buttons, the assistants just walk up to the rig and push one button, one direction, to power everything.

The gimbal feels great in the hand, feels buttery smooth under load, and comes apart very easily, offering direct access to the bearings. 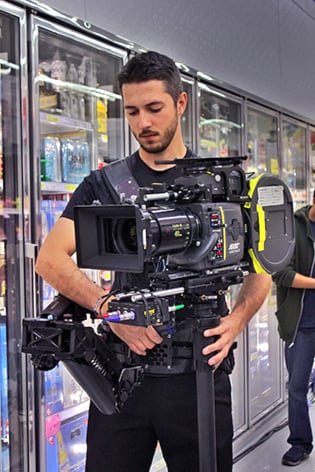 An Arricam LT with Cooke Anamorphics for a recent short film.
This build flew like a dream on the M-1.

The whole sled can be taken apart in just a few minutes. I learned this through necessity after a long couple of days on location in Altadena. We found ourselves on a stretch of fire road that was basically a dust vortex, and the rig was filthy. Over the weekend, I took everything apart and made it sparkling clean over the course of one glass of beer.

Again, I'm so happy with this sled. It's obvious that a lot of thought and care was put into every facet of this rig, and Dan and Jacob, along with the rest of the guys at the Glendale factory, have made themselves extremely available to answer any questions I've had.