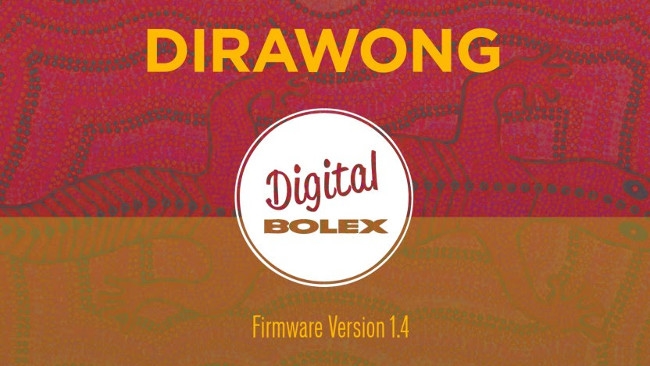 The latest firmware has dropped for the Digital Bolex, along with an interesting new naming convention!

Ushering in an a new naming scheme, the "Dirawong" update (aka v.1.4) for the Digital Bolex D16 brings a number of important enhancements to the camera.

Some of the new features, such as the addition of ISO 800, removal of the magenta cast in the highlights and audio playback, have been long anticipated by the user base. Others, including  a number of subtle but important improvements, make the camera more flexible and stable for the user.

With more features still on the work bench, the team says to look for another update in the spring.

The D16 firmware 1.4 Dirawong can be downloaded from the Digital Bolex page.

In the mythology of the Bundjalung Nation of Australia, the Dirawong, an unseen spiritual creature, protects and guards its people, aiding them in astronomy, technology, medicine, art, and nearly all aspects of religious and day-to-day life.

The next Digital Bolex firmware, 1.4, has been released under the name Dirawong. Starting with this revision, we will be naming each official revision for ease of reference to our user base. The previous firmware releases have been retroactively named:

1.0.0 – Amarok
In Inuit tradition, an amarok is a mythic lone wolf that will devour anyone who hunts alone at night. Folklore casts the amarok as both villian and hero in different legends that explore morality and bravery.

1.2.0 – Basilisk
The Basilisk, in European lore, is king of serpents and causes death with a mere glance. The Basilisk is thoroughly described in Pliny the Elder’s Natural History in Leonardo Da Vinci’s bestiary.

Due to the nature of this firmware update, to install it you will be required to install a new version of the Digital Bolex Utility, which you can find on the Downloads page.

The loading process for the new firmware may take up to 5 minutes, and the first time the camera boots with new firmware the boot process may be slow.

Note for owners with older cameras: it is possible that there may be hiccups in updating cameras with a 199 or lower serial number; in the event this occurs, please log into your account and create a ticket. If any bugs are reported, patches will be made available. Until then, you may revert to the most recent version of the firmware.

Dirawong would not have been possible without the contributions of Eddie Barton, who we’re happy to say has been promoted to an official member of the Digital Bolex team. Eddie’s knowledge of color science has been instrumental in the strength of the new color temperatures and magenta improvement present in this firmware and new firmware going forward.

We’re already hard at work on future updates, which include:

Keep an eye out for these changes and more announcements in the spring.