How to mount B4 lenses on the Sony FS5 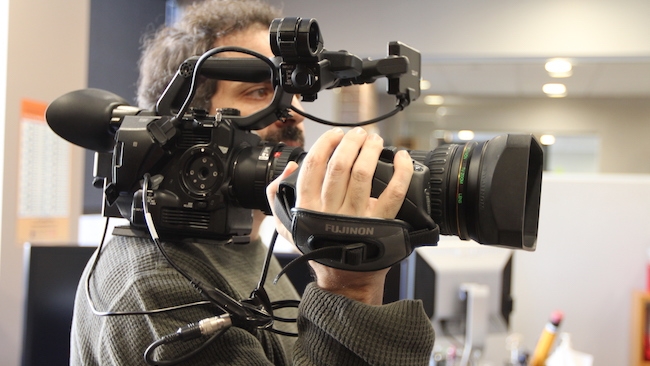 Abel Cine takes advantage of Sony's Clear Image Zoom, porting a range of protean B4 lenses to the FS5.

While 2/3" shoulder rigs have their place, they aren't always convenient for keeping up with high-speed sports or the long, difficult hauls sometimes required for nature and documentary shooting. Additionally, modern cinema style cameras have a relatively limited selection when it comes to a single catch-all zoom solution.

Abel Cine has applied a bit of technical wizardry, essentially taking the traditional versatility of the shoulder-mounted behemoth that is a 2/3" camera rig and shrinking it down (comparatively) to a lightweight, portable, HD camera rig built around Sony's FS5 and FS7.

I spoke with Moe Shore of Abel Cine in New York about the decision to use the FS5:

"The FS5 is true state of the art in terms of price and performance. It is small, high quality, low cost and has features like center crop and clear image zoom (a high quality digital zoom which contributes to the overall range of zoom in this configuration)." He went on to remind me that "this combination of accessories will also work with the Sony FS7!"

This clever work around is based around the HDx1.4 optical adapter which enlarges the image coming off the B4 lens to cover a super16mm image size. "Wait," you might be saying, "but the FS5 has a super35mm chip!" And you'd be correct. The image size issue is easily bypassed by the use of a "center crop" mode, and Sony's Clear Image Zoom, to utilize only the area of the sensor covered by the lens.

Now this does cause a minor loss of light (Abel Cine cites it as less than a stop), but this is simply a result of physics and the nature of light. In order to spread an image with a fixed intensity of light over a larger area, you are inherently going to lose some of that light as you stretch it over that new surface. Additionally, the fact that a number of these B4 lenses open as wide as ƒ0.9, the loss is minimal compared to the 68x zoom you get in return.

Moe went on to explain: "The B4 adapter is one of a group of adapters developed for different size sensors in association with IB/E, a German optics design firm. This adapter, the HDx1.4, is made for Super16 size sensors with option to switch to various lens mounts including the Sony E-mount. Being optimized for Super16, the loss is a little less than one stop."

An additional consideration is that while the FS5 does naturally record in 4K, in order to use the B4 lens system, you are restricted to shooting in HD. This has to do with the cropped sensor mode and the super16mm image area provided by the adapter. I personally believe this camera operates best in HD mode and hardly see the ability to shoot full 1080 HD as a drawback.

The incorporation of a Cameo LANC cable offered "an economic solution for triggering the Sony FS series cameras, while adding a second function such as focus magnifier, peaking or others." Since the body adapter is passive and will not provide power, the LANC cable also solves the issue of powering the lens by plugging into a BPU-U60T battery (also used to power the camera) with built in Hirosi 4, 14v power out.

Adding a B4 broadcast lens to the FS5 nearly doubles the size of the camera, while also making it much more front-heavy. Depending on the situation (and lens!), it might be necessary to add a set of rails and additional lens support. But considering how compact and lightweight this camera is to begin with, it's still significantly less cumbersome and more compact than traditional shoulder rig cameras.

Abel Cine has done an impressive job with the B4 lens system; it's a great example of engineering an extremely creative solution that fuses the best parts of technology, both old and new.