AJA's surprise new camera is a change of direction 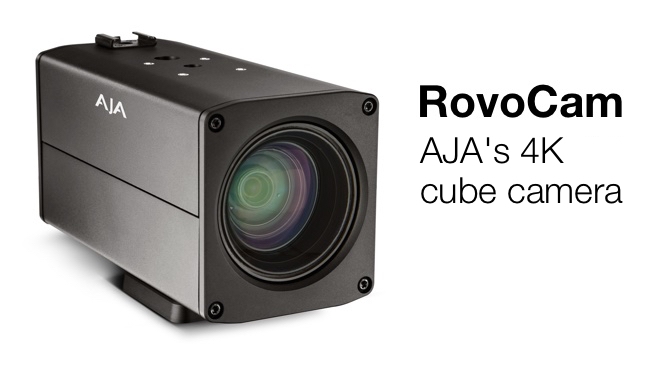 The RovoCam: AJA outside, Sony inside

After the CION, it was always going to be difficult to know what AJA would do next on the camera front. A 4K box camera is a bit of a surprise to everyone though.

AJA's CION camera surprised everyone nearly two years ago. The company which was previously noted for its range of video interfaces, converters and video recorders, astonished visitors to NAB 2014 with a fully developed 4K cinema camera that was big on ergonomics.

Anyone speculating as to AJA's next camera product would have done well to have considered the company's very significant turnover in industrial and AV products, where applications are not as glamorous as filmmaking, but which are extremely widespread, although, much of the time, completely hidden.

And it is from this market sector that the new camera emerges. The RovoCam is a 4k (UHD) box camera with the sensor and camera optics by Sony. The Sony FCB-ER8300 camera module has a twelve times optical zoom and a twenty times zoom using Sony's Super Resolution Zoom, which we assume is a type of digital zoom.

AJA has added an interface to the Sony unit that allows uncompressed video to be passed along a Cat 5e/6 network cable to a reciever that converts the signal to HDMI. Note that although the camera has a network cable connection, this is not an IP device. Instead it uses what is set to become a standard for passing video over network cables, called HDbaseT.

The new device is designed for mounting unobtrusively in small places while outputting a full quality 4K video signal, but there's nothing to stop it being used for filmmaking or broadcast production, from reality shows to wildlife documentaries. Apart from the high quality image, the standout feature of the camera is that it only needs a single cable for video output and power. Installation should be very simple.

For full details about this new camera check out the press release after the break.

"AJA has always been known for supporting open standards with highly functional, flexible and reliable technologies, and the release of RovoCam continues this trend. Marrying our HDBaseT interface technology with Sony's compact 4K camera delivers incredibly powerful camera acquisition with very simple single cable setup and operation," said Nick Rashby, President, AJA Video Systems. "We've partnered closely with Sony for many years and RovoCam comes as the latest in a long line of collaborations with them."