Examining the future (and some extreme lighting) with the BSC 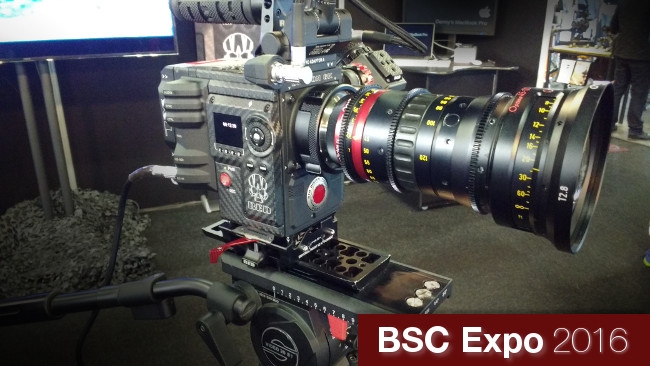 RED exhibits the Dragon 6K at the BSC Expo

Phil Rhodes visited London's BSC Expo 2016 mounted by the British Society of Cinematographers and brought back some industry insights and a few oddities in the lighting arena.

As we've said so many times, producing good pictures is a multi-disciplinary concern. Equipment is a huge part of it, of course, but the reality is that the quality of people is now much more of a leveller than the quality of equipment. Anyone inclined to argue might consider the likely outcome of giving a lower-end or older camera to the people who're currently shooting Star Wars at Pinewood; would the lower dynamic range and higher noise floor really offset the production design and the skill of the director of photography?

Inasmuch as it's possible, the recent BSC Expo in London represented something of a microcosm of that reality. As an exposition, it's about equipment and facilities, of course – but it's low-key in the most advantageous sense of that term. Nobody's here to coo over the latest toy, because most of the attendees probably recognise that the latest toy is not a game-changer. In fact, the art and science of filmmaking has resisted several spirited attempts to change the game in the last decade or so – 3D and high frame rate – and it would be easy to get the impression that, at least in the UK, there's a sense of enjoying whatever calm is available before the next storm.

This being the case, anything the BSC crowd does view as important is probably worth looking into more closely. The two-day event's track of seven seminars included three topics that explored HDR, all of which were well-attended, even though the penetration of HDR demonstrations on the show floor were limited to Sony's display of their seminal BVM-X300 display. Other chats included one by Ira Tiffen (of filter fame) regarding, naturally, "putting more impact into your images with camera filters." Given the amount we've talked about the importance of optical, rather than electronic modification of the image, this was good to see.

Daring to be different (and larger) 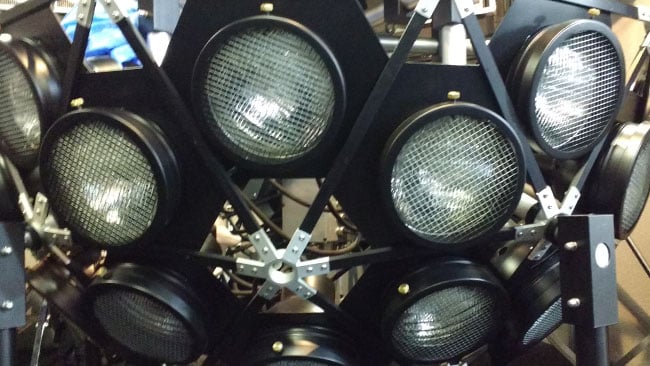 Being a show targeted closely at the upscale end of the market, there's always some entertaining – even slightly hilarious – contraptions. Iride Lighting's 'Geodesic Moon', for instance, comprises a hemispherical arrangement of tungsten PAR lamps with a frame designed to support a fabric diffuser. The whole thing is probably ten feet in diameter and is available in both 26 and 40kW versions, so those operating solely on domestic power supplies need not apply. However, it's a great example of the sort of huge scales that can sometimes be necessary on big shows – and why it's sometimes difficult to get night exteriors to look like they do at the cinema when one is operating on a less generous financial basis. 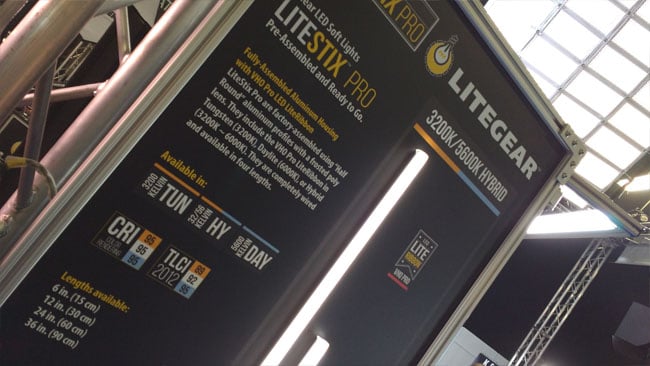 LiteGear's Litestix, with an array of their flexible LED panels in the background

Similarly upscale displays were shown by Litegear, although the enormous LED fill panel they displayed was visibly made of an array of smaller units which might, individually or in smaller arrays, reasonably be expected to find work on productions at any level. Its Litestix product, which operates in effect as an LED-driven replacement for fluorescent tubes, has been much in evidence for a while, but a brief conversation with Kino-Flo's Frieder Hochheim reveals that the fluorescent lighting industry remains very much aware that LED is still far from perfect as a technology.

Kino's most recent LED units have been designed to perform properly with the specific requirements of current cameras in mind; they work well with Alexa and, apparently, require only a tiny amount of correction for Sony's different colorimetry. While some might decry this situation as a failure of technology (we'd prefer these things just worked, of course), it's probably more useful to recognise the level of technical involvement this represents and applaud Kino-Flo for its efforts.

Finally, here's a picture of a really big lightbulb. This is an 18kW HMI (next to a much smaller discharge lamp of probably a few tens of watts). 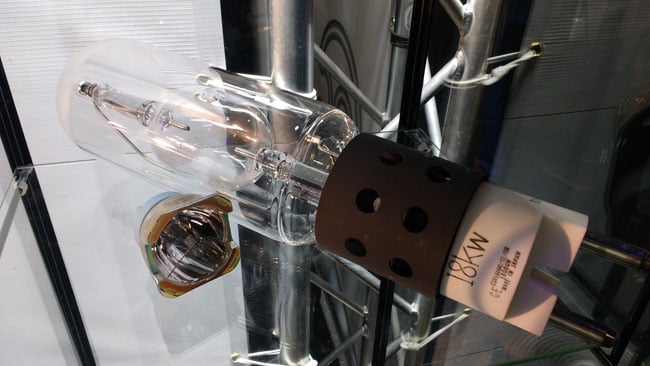 It's probably the biggest single source of light that's commonly available to filmmakers and, even within that, it's not actually that common to find one on anything but the most well-heeled productions. Its presence reminds us that many of the recent changes to film and TV production technology have been most apparent at small scales; at some point, there's still nothing like this other than this.