What can we expect from the new Varicam? 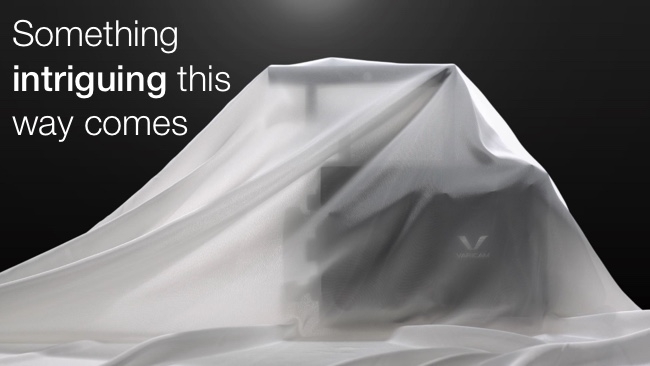 The new Varicam: still under wraps

Next week Panasonic will unveil a brand new Varicam, but which of the many different possible directions available to the modern camera manufacturer will the company have taken it in? Phil Rhodes reads the runes.

Much as it pains us to speculate about a tantalising, half-viewed camera under a gauzy drape, the record of Panasonic's Varicam line is interesting. The first Varicam was probably the first mainstream video camera to provide anything by way of overcranking, and although the HD variant of the DVCPRO codec was never particularly wonderful the pictures from the first camera to bear the brand were widely liked. Perhaps most prominently, early Varicams saw heavy use in natural history production, buoyed by a combination of easy ENG ergonomics and pictures that were easy to like.

The thing about that part of the market, though, is that it's small and exclusive and the people who spend money there are often cautious. There's not much risk in the assumption that companies such as Panasonic and Sony make far more money out of far less spectacular devices – both companies sell consumer and midrange ENG cameras in huge quantities, and it's easy to see things like Sony's F65 and the recent Varicam 35 and (to perhaps a lesser extent) HS releases as prestige projects. Now, nobody's claiming that the big, expensive cameras from the principal broadcast manufacturers are loss leaders; they cost enough money that a profit is presumably being made. In their position, though, many of us would look at other manufacturers with envious eyes, wondering how it's possible for a company to do so well on a technology base that was always bulky and power hungry and is in some ways starting to show its age in terms of capability, too.

The big broadcast manufacturers seem to know that they're not Arri, however, and it's therefore quite reasonable for all these concerns to create a disinclination to have anything to do with what we might call high-end cinema cameras. Certainly, this might go some way to explaining Panasonic's effective absence from the cinema camera market for the last few years, recently corrected by the new Varicam releases. A critical eye might view this as having squandered an early lead; the first Varicam was even proposed, and much more rarely used, as a feature film camera, partly because of the variable frame rate capability but mainly because everyone really liked the pictures, regardless of their intermediate 720p resolution.

The question that's been repeatedly raised is whether the new Varicam is likely to be another addition to the company's high-end range, or something more oriented to compete with Sony's FS7, the Blackmagic Ursa Mini, and others. Both areas of the camera market are currently very well served: at the high end, Canon are snapping at the heels of F5 and F55 with their EOS C devices, Arri is still cranking out ALEV-based cameras in the Alexa and Amira range, and there's the extant Varicam 35. At the more affordable end – with which Canon overlaps to some extent – Sony's FS series (including, still, the excellent FS700), Blackmagic's broad church of cameras, JVC's LS300, and the DVX200 exist. So, do we really need another sub-$10K big-chip camera? Do we even need another $50k big-chip camera? Can the market stand it?

Well, let's never underestimate the ability of a manufacturer to insert another product into a crowded marketplace. Nevertheless, these doubts provoke thoughts of more original designs. Replacement of Varicam 35 is unlikely at this early juncture, although the camera is big and heavy. A smaller, lighter option, even something small and light enough for drones, is not unimaginable given the intervening time for a bit more R&D. In this context, the prospect of an Amira-style field production camera based around the same imaging technology is a bit more of a stretch, but wouldn't completely surprise. Even further into left field lies Ikegami's HDK-97ARRI camera, based around Arri's ALEV sensor, which has been shown rigged for big-chip studio operations. The market for that sort of camera, given the need to polish the appearance of studio television, is difficult to predict, but seems to have interested Ikegami.

With the possible exception of a drone-oriented minicam, though, these ideas stretch credibility. If Sony can pitch the FS5 in between the top end of DSLRs and the bottom end of production cameras, Panasonic can probably fit something between the DVX200 and – well – it's actually quite a big gap between that and their next big-chip device, isn't it? A gap in a product range isn't quite the same thing as a gap in the market, but businesses tend to see that sort of situation as an opportunity to compete, as opposed to confusing the issue. They don't really have anything in the high-four-figure range that's currently dominated by Sony and it would be no surprise to see an attempt made for that sector. Whether such a device would have any legitimate technical connection with the big Varicams is another matter; after all “Varicam”, like “CineAlta”, is just a collection of letters.

To continue on this somewhat-risky road of prediction, some of the implications of a midrange Panasonic are interesting. Such a device might well reach for the company's tough and well-specified flash format, with the caveat that proprietary flash is routinely very expensive and tends not to be technically necessary. The success of such a device, as with so many recent releases, is likely to rest principally on layout, ergonomics, and usability. As such, let's not get too excessively excited about new releases until we know what they are intended to be and how well that intention is realised. The march of progress has ensured that many modern cameras are so good that the differences between them are buried deep in the minutiae. We'd love to see someone break that trend and produce something truly exceptional, but it's hard enough these days even to conceptualise what that would be, let alone build it.
88