When should you use a zoom lens? 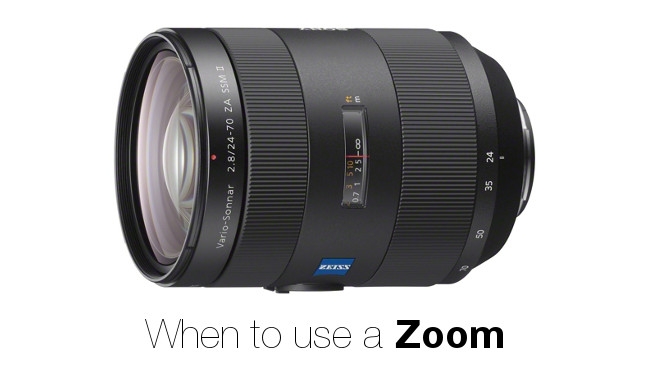 Generally speaking, primes offer better image quality and are faster than zoom lens options, but there are some instances when packing a zoom makes a lot of sense.

A zoom lenses is a single lens that allows the user to select the angle of view. This means one can quickly go from a wide-shot to a close-up with the snap of a ring on the lens barrel, without having to stop and change lenses. While prime lenses (lenses with a fixed angle of view) are typically considered the gold standard of all forms of photography and cinematography, there are a number of instances in which the implementation of a zoom lens makes more logical or aesthetic sense.

Tool for the unpredictable

Not every shooting situation is going to allow for predictable conditions. Verité style documentary and 'guerilla' narrative filmmaking are two examples of a situation in which a cinematographer will find themselves having to work in a fast-paced environment and relinquish a great deal of control over lighting conditions and concise framing.

Similarly, in the world of professional sport broadcasting, while a great deal of money and time is spent to control the shooting atmosphere, the action is for the most part unpredictable and the cameras must remain far away as to not interfere with play. Many companies produce specialized zooms for event and sports broadcasting for this reason.

Directors such as Alfred Hitchcock, Sam Peckinpah and Steven Spielberg often used the zoom lenses as a creative or aesthetic choice. With knowledge of how different types of lenses effect the visual qualities of the image, there is much one can accomplish by exploiting the changing angle of view of a zoom inside a single shot.

Another thing that can't go without saying: zoom lenses are also fantastic catch-alls for photographers and cinematographers who are just starting out and don't have the ability to spend a great deal of money on an extensive set of primes.

There are, of course, some trade offs. Zoom lenses are larger and typically heavier than most primes. Zooms also tend to have higher minimum apertures than primes, which is something to think about in low-light situations, but this can easily be compensated for using small on-camera lights or a "speed booster," which gives the added benefit of expanding the angle of the lens as well.

The ability to quickly change from close-ups to wides, follow the football punt down the field, unobtrusively push-in on an interview subject to capture an emotional moment, or steal shots from across the street to avoid getting cited for not having a permit are all options the zoom lens brings to the table. So in uncertain situations, a versatile zoom lens might offer the right balance of efficiency on location and the ability to capture a shot when you might otherwise miss it.