Hands on with the remarkable Panasonic DVX200 (includes video) 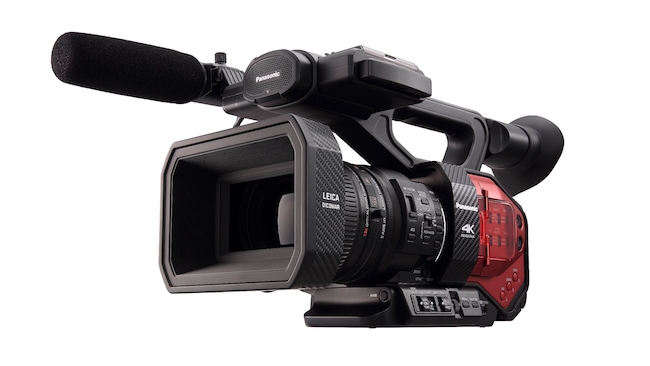 Hands on with the Panasonic DVX200

At the start of the year, Roland Denning gave us his initial opinions on the Panasonic DVX200. Now he provides his views after using it in anger for a while, from that remarkable Leica lens onwards.

The first part of my DVX200 review attempted to describe the camera's features and my first impressions. This article will describe the results of actually using the camera.

Let's start with the good news. That Leica lens is a thing of beauty. On any reasonably priced video zoom, you expect some breathing (a zoom effect when you pull focus), but on this one, as you can see from my tests, it's minimal. Chromatic aberration and distortion is minimal (just a little barrel distortion on the widest part of the lens) and, although I haven't pointed it any focus charts, it looks pin sharp. The macro setting (you switch this on via one of the user-assigned buttons) is really useful, too. Focus, zoom and iris are all adjusted conventionally via rings on the barrel of the lens, but via servos rather than directly, but they are pretty smooth.

There are, of course, compromises with any zoom lens design and the only thing wrong with this lens is that it's slow. It offers f2.8 at the widest end, but very soon ramps to around f4.5 (no T-Stops given, but my guess is it's around T5). It's not really a f2.8 lens, but other than that, there is little to complain about. It's a great achievement.

You may have noticed in the macro shots of my cat Lazlo that the white of the sheets is blown out. Is this a hint of things to come? We shall see.

With an f4.5 lens and a base ISO rating of 500, this is not a low-light camera, but it's actually rather better than you might think. Here are some night shots at ISO 4000, switching in the 'High Sensitivity' setting and adding two stops of gain, no adjustments in post. Unsurprisingly, there is some noise in the shadow areas, but not as much as I expected.

Although I set the camera to 3200K and made no attempt to white balance (far too many conflicting light sources), there is something odd about how yellow predominates in the highlights and violet/magenta in the shadows. I compared this with similar shots on my HPX250 using 12db of gain also using the 3200K preset. The DVX200 shots are obviously brighter and cleaner (it's at least a stop faster), but the colour balance on the HPX250 looks to me much more acceptable.

There some annoying quirks that hopefully can be sorted in software updates.

The LCD switches off automatically when you put your eye to the viewfinder, but it does it rather too eagerly. Most serious, if you shoot in 25fps, there is a delay of around half a second, maybe less, in the LCD display and the viewfinder; not only does it mean what you are watching is out of sync with the audio, but the lag is enough to make accurate panning, framing and manual focusing problematic - you keep going past your mark and then compensating. It is my habit to shoot at 25fps and I made the mistake of shooting at this speed for the first couple of days of tests. This really needs to be fixed.

Generally, test shoots are designed to show cameras at their best. I thought it would be more interesting to put the camera in a very difficult situation. Five years ago, I made a very small-scale documentary about my local café, Mario's. I decided to go back there to test out the DVX 200 on a follow-up to the original film (this is an extract from work-in-progress, rather than a film in itself).

The café is very small with window light at one end and tungsten and fluorescent at the other, a nightmare mix of high contrast and mixed light. But documentaries are often made in nightmare situations. Ideally, this was a location that should have been lit, perhaps with LED panels rigged to the ceiling, but not only would that have been difficult (the café is tiny), but it would have been intrusive and spoiled the informal atmosphere. So, horrible mixed light it is. You will see sections of the original documentary (shot in HDV on a Sony Z7) cut in with the new for comparison.

[Warning: Mario swears quite a lot, but you don't really mind that, do you?]

The Z7 didn't cope well with the high contrast, shooting against the window light. The DVX200 perhaps does a little better, but, to be frank, it's not great on highlights. There is a shot in the kitchen where the fried breakfast is being spooned onto a white plate; the plate is blown out completely and it really shouldn't be. I now, of course, regret not trying V-Log on this shoot.

Arguably, for this sort of shoot, you are better off with a small chip camera. The larger sensor, however, is an advantage when it comes to cutaways (which I turned to black-and-white on this occasion, partly to circumvent the mixed-light issues).

There was another thing. Although the location involves horrible mixed light, it was still much harder than it should have been to get decent skin tones. As seen in the night shots, there is a tendency to go yellow in the highlights and magenta in the shadows. In the second shot, the sky has a distinct yellow tinge. Well, it didn't. I began to think there was something wrong with the colorimetry in this camera. This could be an issue with this particular camera, but I suspect it is a wider issue.

But, for documentary use, my main gripe is not with the camera itself, but the form factor of ‘hand-held' designs of this type (and this applies equally to the HPX250). With lens hood, battery, tripod plate and an on-board mic, it weighs around 3.6Kg. Yes, press the viewfinder up to your eye and you can hold the camera steady, but not for that long. When a camera gets to this weight, it really needs to be shoulder-mounted and, with the viewfinder mounted on the rear of the camera, building a balanced, shoulder-mounted rig is just not going to work (I know - I've tried).

The DVX200's place in the market

So, what is the competition? Perhaps the closest competitor is the Sony PXW-X70 a smaller camera with a slightly smaller chip which needs a paid upgrade to release its 4K capabilities. (This was written before the announcement of the Sony PXW Z150, which we wrote about here.) It might be tempting to compare the DVX200 with the URSA Mini, which starts at around £2K (that's the entry level model with the 4K sensor and an EF mount). But add the viewfinder, two CFast cards and shoulder mount and you are passing £4K - and that's without a lens (and about the same price point as a Sony FS5). Those two cameras have Super35 rather than MFT sensors and, if you can want a video-style zoom lens, it would cost you over £20k.

For a large sensor camera, let alone a 4K camera, with a decent video zoom lens, the DVX200 has little competition. It has a wide range of format options, can record 4K internally on low cost cards or output at 10-bit 4:2:2. It can make great pictures and it is, I think, excellent value for money, but there are a few areas where it falls short. In some ways, it feels like a MFT HD camera with 4K aspirations, at other times like a professional heart beating in an amateur body. It is, in fact, made in Panasonic's consumer camera factory and has a 2-year guarantee rather than 5 year of its P2 range. The lens is great, but I am not happy with the camera's current colorimetry or its ability to handle highlights.

It would be good to have a sturdier body and, although it would add significantly to the cost, make that specially designed Leica lens detachable, so we could use MFT primes. Ideally, I'd like a configuration like the URSA Mini body, viewfinder on the side not the back, with an MFT mount and Variable Scan Mapping like the JVC GY-LS300. I like the idea of recording on cheap SD cards and accept the limitations, but it would still be great to be able to record at least HD ProRes422 or AVC-Intra without an external recorder (even my old HPX250 records 10bit 4:2:2 HD internally).

If external recorders from Atomos or Video Devices or Convergent can record 10-bit ProRes422 UHD onto inexpensive SDD drives (as did BlackMagic's initial camera range), would it be too hard to fit one into a camera like this? If Panasonic could address at least some of those issues, I'd be willing to pay another couple of grand for the camera.