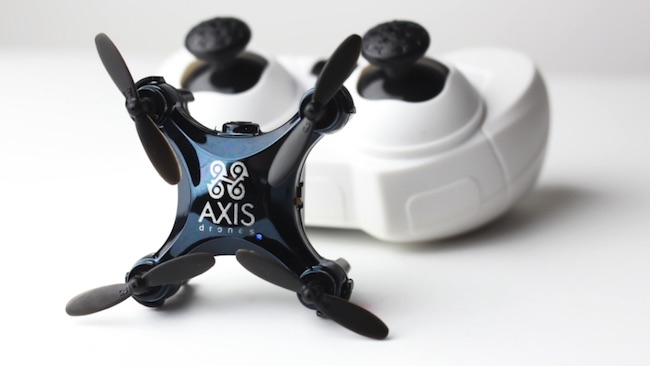 Drone fliers in the US have until 19 February to register their machines with the FAA, unless they’re flying the forthcoming Axis Vidius that is, which comes in under the .55lb (250g) weight limit.

Axis specialises in micro drones — it has units that will comfortably fit in the palm of your hand and look big while doing so — but this is the first time it’s put a camera onboard.

Somewhat inevitably it’s billed as ‘The World's Smallest FPV Drone’, and as you would expect the $95 unit won’t be breaking any performance records with its 420p video streaming and still capability and 5-7 minute flight time.

But for those that just want to muck about with a drone and not trouble the FAA while they’re having some aerial fun, the 4.3cm x 4.3cm x 2.5cm does get under that crucial 250g barrier.

Which rather leads us to the more weighty story of the FAA registration programme.

This has been live in the US since 21 December and requires anyone operating an aircraft of between .55 and 55 pounds (25kg) to register their machine for a $5 fee (waived up until 20 January). Registration provides the pilot with a certificate and an ID number that they must stencil onto their drone/s before flying them.

Hobbyists can registerhere. Commercial users still have to use the paper-based system.

And if that all sounds nice and fluffy, as the FAA website says: “Failure to register an aircraft may result in regulatory and criminal sanctions. The FAA may assess civil penalties up to $27,500. Criminal penalties include fines of up to $250,000 and/or imprisonment for up to three years.”

Deadline for registration is 19 February.