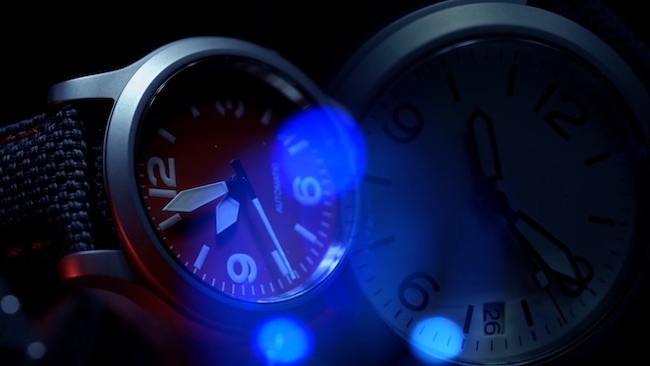 Still from the finished commercial

Phil Rhodes shot a recent commercial using the Blackmagic Ursa Mini 4K coupled with a Canon EF-S 60mm 2.8 USM Macro lens. These are his thoughts on the production.

The film and television industry's obsession with resolution is, I think, a throwback. Until the early 2000s, it wasn't easy to create a video camera that could equal the sharpness of 35mm film. I think that there's a certain inferiority complex still at play. Some might say that's quite appropriate, inasmuch as the highlight handling and colorimetry of film still has a certain something that isn't always equalled by even quite good digital cameras. Resolution, though, frankly is. The maximum resolution of which the traditional four-generation 35mm film internegative process is capable is under 2K. It's a point of some irony that 2K digital projection of a good film scan is probably sharper – whatever else we think about it – than 35mm projection ever was. But 4K digital cameras are now trivially inexpensive and they comfortably out-resolve any 35mm process. So, in that regard at least, we've no longer got any skeletons in the closet.

And then we go and shoot things like this, which embrace limited depth of field and soft focus as both graphical elements and aspects of the live-action photography:

OK, to some extent, it's just a load of macros montaged together. But in other ways, it's an example of the sort of thing we've been trying to emphasise recently, which is that there's almost nothing special about the electronics and the postproduction. If there's anything to talk about at all, it happened long before the image hit the sensor. 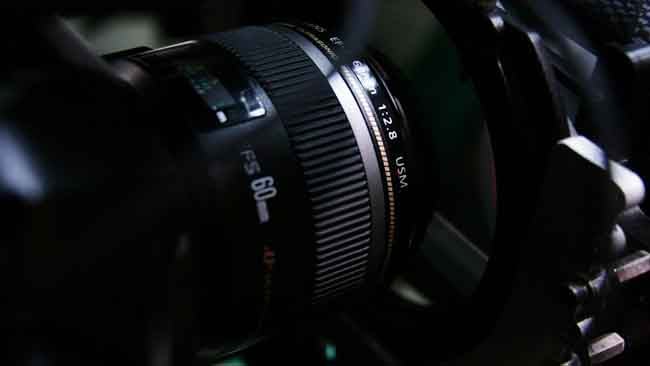 Naturally, it's important to start with competent technology, so that the photographic intent of the thing is properly recorded. This piece was shot on the Blackmagic Ursa Mini 4K, the EF mount version, which, for sake of full disclosure, was supplied for review by the company (with no particular encouragement to do anything specific with it). I paired the Ursa Mini 4K with an Atomos Shogun, used solely as a monitor and test-and-measurement device (though it could have made an equivalent recording).

While I'm generally cautious about the EF mount for cinematography cameras, since most EF lenses are not well suited for cinematography and it has a deep flange depth which limits compatibility. In this instance, it aligned nicely with my desire to use the Canon EF-S 60mm f/2.8 Macro prime lens, which is one of only two prime lenses in Canon's range that is designed for the APS-C mount (the other is a 24mm f/2.8). The 60mm lens, which previously garnered a Gear We Like recommendation, is naturally designed for APS-C cameras. APS-C sizing is a rather variable concept, with different manufacturers creating cameras with slightly different sensor sizes under the same banner, but the 60mm certainly covers the Ursa's Super-35 sensor. Super-35 itself is something of a moving target, but the chip in the current Ursa Mini is a familiar part of many Blackmagic cameras and doesn't provoke too many problems – it doesn't vignette on the 60mm. 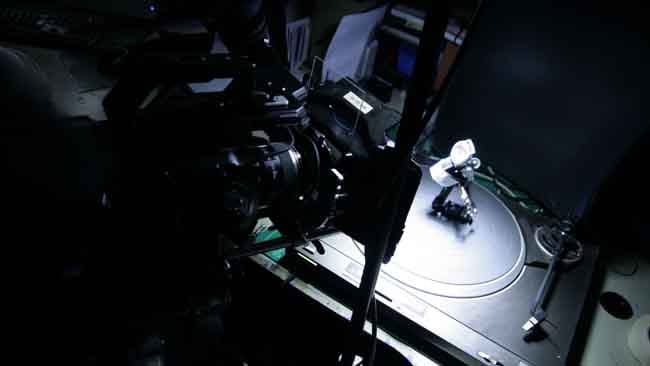 Several things were used to position the watches, including an old record turntable.

In a world of digital capture and digital effects, excessive CG images in films and cover models styled by Rimmel, MAC and Adobe, there's a general disdain for the fake. Conversely, the optical effects of macro photography are as real as you can get. Allowing less-important parts of the scene to drift out of focus has been popular since people first worked out that bigger chips minimise depth of field for a given angle of view, but it's always been fairly easy to achieve extremely small depth of field with macro lenses (including the macro range on ENG lenses).

The approach taken for Diurne was suggested in part by the domed crystal parts of the watches, which themselves impart some interesting optical effects – especially the white-faced watch, which has a thicker, more curved front surface and creates more distortion in the numbers behind when viewed from an oblique angle. Combined with the reflective qualities of the watch parts and the attractive out-of-focus characteristics of the 60mm lens, some interesting, real-world optical fireworks are possible. 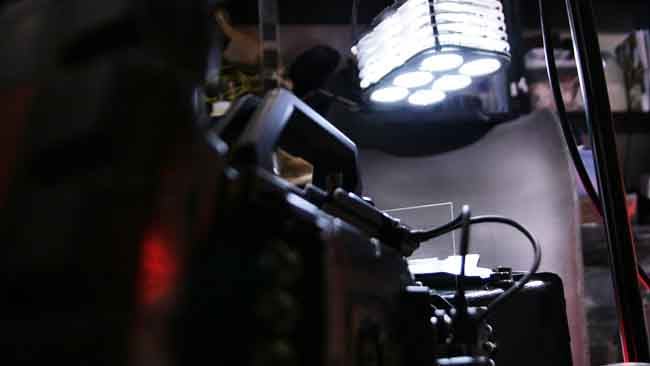 To make that look work well, some hard light is required to create specular kicks. Moreover, on a reasonably fast f/2.8 lens, there's a need to control depth of field to a reasonable level, otherwise it isn't so much a case of which number on the watch face we want in focus, more which edge of the number. On such a small scale, though, it's easy to provide enough light to close down and ensure things are as desired. The principal controlling aspect of exposure is the brightness of the uppermost highlight on the face surround. It was occasionally allowed to clip slightly, although being a sandblasted metal finish meant that excessive specularity wasn't too much of a problem. The remaining control is afforded by a linear polarising filter – trimmed to control reflections, mainly on the clear glass parts, as required – and either one or two ND grads, occasionally opposed.

On a 60mm lens with a fairly small front element, with the filter as close to the lens as possible, the graduated effect is subtle and the filter operates almost as a variable ND with some residual tendency to reduce the brightness of that uppermost highlight. The sensor that Blackmagic uses in its 4K cameras is capable of  eleven or twelve stops of dynamic range, which is fine in these circumstances. It's less ideal, to be hyper-critical, on day exteriors, but it's worth remembering that things like the Viper, one of the earliest cameras considered suitable for cinema work, had similar dynamic range, a bit less sensitivity, slower frame rates and a whole lot less resolution. 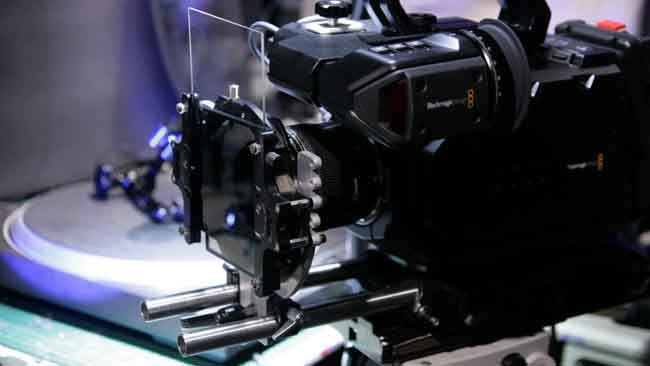 Ursa Mini with 4x4 linear polariser and ND grad filters. The mattebox's sunshade has been removed to improve clearance.

The iris shape of the 60mm macro, which greatly influences what we might call optical special effects, is not completely even when wide open, and this is occasionally visible (as in the roundish spot which passes behind the words "by night"). We could call that ugly bokeh or we could call it a characterful piece of optical realism; poorer excuses have been made for lenses in the past. Ergonomic concerns are another matter - with such a short focus rotation (perhaps an eighth of a turn), it wasn't ever really going to be possible to perform credible focus pulls, so a large part of the work involved positioning the watch such that the rotation naturally created the desired progression of focus. This is something of a trial-and-error approach and, in other circumstances, this sort of thing might be done on a motion control crane with the focus considered as an axis of the motion control equipment, but that's absolutely necessary only if very specific three-dimensional moves are required. 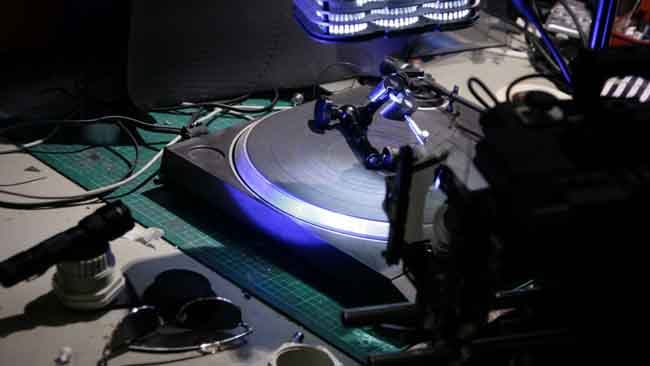 Camera setup was straightforward – film colorimetry, 4000K colour temperature to allow the LEDs to go slightly cool, and ProRes HQ recording. Postproduction work, other than the titles, involved nothing more than a small black crush to avoid the multi-layered composites building up the black level unacceptably. Other than that, it's practically ungraded, which to some extent is to be expected given the easy consistency available when doing what are essentially pack shots. This is perhaps not the most obvious application for the Ursa Mini, which may be best known for its easy handheld operation and excellent viewfinder, but the 4K sensor does tend toward rich colour and deep blacks and it does a good job for us here. If there's a moral to this story at all, it's that no matter how many pixels we have, the lens, filtration, lighting and production design remain absolutely key.

Thanks go to watch designer David Chilvers, for his permission to release the material, and to Blackmagic Design for the camera.