The camera that caught the Kennedy assassination 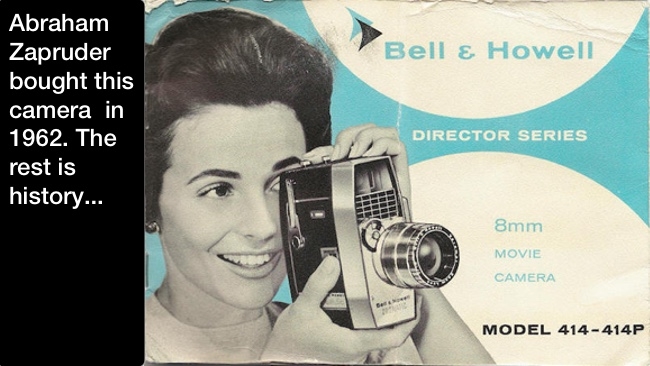 On November 22nd 1963, a historic and tragic event took place. The American President, John F. Kennedy, was assassinated in Dealey Plaza in Dallas, Texas. This is the story of the camera that caught that historic, terrible moment.

The Kennedy assasination was essentially the 9/11 of its time; and event filled with death, mourning, media outcry, tragedy, and crazy conspiracy theories – albeit on a vastly smaller scale. It also had its own video footage and photographs, and it has been estimated that, out of the alleged 600 people in the plaza that day, 32 of those were photographers. One of those photographers was a dressmaker and an amateur/hobbyist filmmaker named Abraham Zapruder, who unwittingly filmed the incident with his (then) top of the line 8mm movie camera. The footage became infamous and highly sought-after, and Zapruder himself became a reluctant part of history. Ironically there were no radio or television broadcasts during the incident, because the area where the President’s motorcade was travelling was not considered important enough.

This is a brief overview of the camera itself – the unsung witness to that tragic event.

Starting from the Top

Zapruder purchased his camera from the Peacock Jewelry Company on Elm St. in 1962 – Serial Number AS13486. It was a top of the line Model 414 PD Bell & Howell Zoomatic Director Series Camera with a Varamat 9-27mm F1.8 lens. It also featured an electric eye (more on that later), a springwind indicator, and speeds of 1, 16 and 48 FPS. He even had a handsome leather carrying case to boot.

It was spool-loaded with double 8mm film and 25 feet could be shot at a time. In fact, the first 25 feet was filled with family scenes, including a grandson digging beside a tree in a backyard patio.

Zapruder’s shiny new toy was a top of the range consumer camera for its time (it was highly rated in the December 1963 issue of Consumer Reports). The “D” designation referred to the “Duel Electric-Eye”. This Electric Eye measured the amount of light the user had at their disposal and it then set the aperture accordingly – from F1.8 to 22. This can also be set manually to get “special exposure effects”.

The Zapruder film was recorded on standard 8 mm Kodachrome II colour safety film, loaded into the main body of the camera. The film could be cleverly loaded like a cartridge and then flipped over when the film finished – much like an 80’s/90’s cassette tape. Batteries or even electricity did not run the camera, instead the camera was wound with a crank and it is advised to do this after every recording (this may remind some people of winding up those good old fashioned disposable cameras from the 90’s that they used to take on holiday).

The camera had the ability to record at three different speeds. The first was single frame (cutely labeled as “Animation”), which according to the manual is “necessary to make an adequate animation scene and can give you many unusual effects”. It even talks about time-lapse being possible – but always remember to use a tripod to get the “best animation results”. The second was labeled as “Run” and the speed was 16 FPS (although Zapruder’s film was clocked at about 18.3 FPS) that was considered the “normal” setting. You can expose 15 feet of film, which is enough for “8 or 9 average length scenes”. The final setting was the 48 FPS slow-motion setting, where you can record “Junior running down the football field, or Susie driving” – but of course the user is advised to always make sure there’s enough light for slow motion movies. The previously mentioned Electric Eye would take care of this and this was combined with the exposure beacon – yellow for proper exposure, red for underexposure, and no light for the adventurous in manual mode.

Zapruder had a 9-27mm telephoto lens (a description which is very much a stretch compared to today) at his disposal when he recorded his infamous film, but it could also be set to wide angle or “normal” (He was approximately 65 feet from the middle of Elm Street where Kennedy was shot). The camera was equipped with a universal focus lock, which allowed the user to keep the focus sharp at various distances. The manual conveniently includes a chart to measure depth of field, with focal lengths, apertures and distances of the subject.

The camera was equipped with an indoor and outdoor filter, which the user would switch depending on what type of film they were using. The user can also set the film speed according to the type of film used (“for faster film speeds, use the setting recommended in the manufacturer’s instructions”).

The original film became one of the most important in American history and though the original 8mm film was copied, recopied (including 16 and 35mm prints) and analyzed ad nauseam, Zapruder never used the original camera again – due to being too traumatized by what he had witnessed. The camera currently resides in the National Archives.

Even though Zapruder’s camera is obsolete and relatively simple compared to today’s fancy DSLRs, Smartphones and other compact digital wonders, it’s quite surprising how many fairly advanced features were at the user’s disposal. It’s also rather fascinating to think that, if the event took place today (although hopefully not), almost all of the 600 or so people in the plaza would have been filming the event on their smartphones. Although he would probably have disagreed, Abraham Zapruder really was in the right place and at the right time.

The full instruction manual for the camera is available online here, and it’s a fascinating look into the past. Reading the manual’s descriptions and language, it is very clear that this was a camera for the masses. In fact, these cameras were mainly used to silently record kids at play in the bath or in the garden, family birthday parties and lovely summer picnics, rather than politicians being murdered. The manual is also delightfully twee at times, where you almost expect the words “golly” and “gee wiz” to appear. (What is also rather lovely is that the manual explains the concepts of exposure, depth of field and general moviemaking to the user - Something unheard of when you purchase a new camera nowadays….)

This little gadget managed to capture footage from an event that sent shockwaves throughout the world (and damaged the American public’s spirit). The footage it recorded became the most analyzed and debated piece of film footage in history (followed closely by Patterson-Gimlin Bigfoot film of 1967), it was broadcast on television and its stills were printed in Time magazine. The film was deemed "culturally, historically, or aesthetically significant" by the United States Library of Congress and was selected for permanent preservation in the National Film Registry in 1994. That’s not too bad for a hobbyist that only recorded 26.6 seconds, exposing 486 frames at 18.3 FPS and without full HD or 4K technologies.