The world’s smallest 4K camera? That’s not the half of it 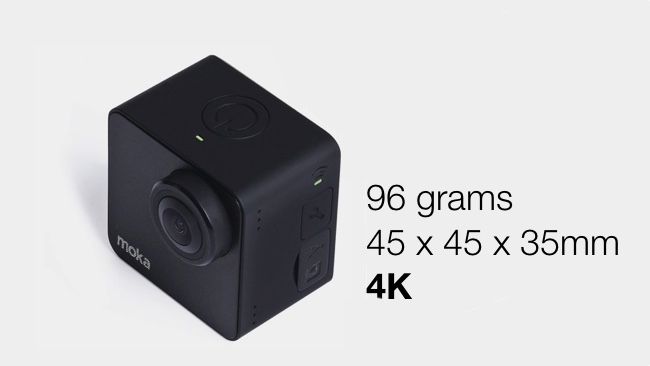 Mokacam, currently fully funded on Indiegogo, not only gives you 4K in a tiny form factor, it’s got a few other neat tricks up its sleeve. How neat? Try a magnetic snap-on spare battery for starters.

The $169 unit certainly packs a lot into a small space. Slightly larger than a Hero4 Session but far more cubelike than the standard Hero 4 at 45mm x 45mm x 35mm, it can capture 4K at 15fps using its reliable 16MP Sony IMX206 sensor and ramps that up to an agreeable 60fps for 1080p footage.

It’s got a waterproof (down to 60m), shock resistant case, motion sensor, and a magnet that allows the user to fix it to any metal surface and is billed as strong enough that it will “stick even when your car is moving fast on a bumpy road.”

So far, quite interesting, but it’s what else it does with the magnet that really caught our attention, Mokacam users being able to simply attach a similarly magnetic spare battery to the outside of the case and carrying on shooting seamlessly when the internal battery runs out of juice after about an hour.

That’s a very neat trick and one that gives you an extra three hours of shooting. In fact that’s something we’d like to see in quite a few other cameras we can think of.

The camera also has an add-on screen that rotates through 270-degrees which, if we’re reading this right, features another internal battery that adds another hour of power.