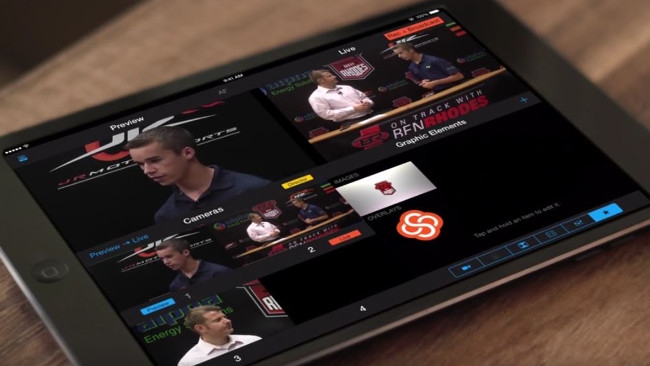 An interview with Nick Mattingly, the head of Switcher Studio, an intriguing iOS app that grants multi-camera production and live streaming functionality to iPhones and iPads.

iOS app Switcher Studio can turn a group of iPhones and iPads into a robust, fully featured live production studio with streaming capabilities to your platform of choice, whether it's YouTube, Twitch, Ustream and many more.

We sat down with Nick Mattingly, CEO of Switcher Studio, and asked him about his product, the new Director Mode, which ups the video quality to 'broadcast' 1080p HD, and what's in store for the future of Switcher Studio.

NM: Just because we have more access to more videos, it doesn't necessarily mean they're worth watching, that it's good video. Switcher allows you to make more better content. It takes a multi-camera production process, which used to be incredibly complicated and incredibly expensive...and takes set-up down to a couple of minutes with Switcher Studio, recording and live streaming multi-camera video with iPhones and iPads.

NM: Switcher Basic is free to use for 30 minutes a day. You can record and do live video - it's a way to get your feet wet, try out the app and see if it's going to work for you. Switcher Pro is higher quality video. It has the new Director Mode feature and loaded with other features like screen-sharing, image insertion and graphic overlays. If you're making videos on a regular basis, then Switcher Pro is probably the way to go.

NM: With Switcher, you pick one device. It's your main switcher, your control board. If you're going to use Switcher Pro, you create an account on our website at switcherstudio.com and use those same credentials on that main device. If you want another camera, you just open the app on another iPad or iPhone and it becomes a source. You can literally pull someone off the street and say, "you're a cameraman today," and they're part of your production. When you pay for Switcher Studio, you're paying for access to that hub, that main switching device, where you connect cameras, record and stream. By default, the main device is going to record your live edits to that primary mixing device. When you cut from camera one to camera three and insert a graphic, all of that is recorded in real-time. You can also tell that device to do live videos. So you send it to Livestream, Youtube or Twitch.

The quality between cameras, in the past, was dependent on your network. So, if you had a hiccup or glitch in your network or you're in a really crowded area, you lose connection to one of your cameras - that would get reflected in your final product or the live video that you send out. With the new Director Mode, it actually disables the built-in camera on your main device and you connect up to four additional cameras. When you start your production, each camera has its own independent recording, so each camera is capturing full quality video to its own local storage. The benefit of this is if you're doing live video, you can stream at a lower resolution and bitrate if you don't have great bandwidth and still have a full quality video to put up afterwards for on demand playback. So, you produce the event as you typically would…. Every edit, cut, or transition you make is saved in a journal file, so when you're done with your event, it actually composites the raw files, the video from every angle, back to that main device, remembers your edits and puts together a composition that you can immediately upload or push into Final Cut Pro, using our new beta program for Mac called Media Manager, where you can start to tug at your edits, so if you were a little quick on one of your cuts, you could tug it using a traditional editing program.

RSN: Our readership consists of mostly film professionals. Can you give us a little more information on the 'broadcast quality' video specs that the Director Mode produces?

NM: The director mode quality is for that recording or capture. Because it's working with the raw files, we can push it to 1080p video. You can also assign a fixed frame rate. I know that this is important for some of our European customers who broadcast at 25 frames per second. You actually have the ability to assign a fixed frame rate for the final composition in Director Mode, as well.

RSN: In your app description, you mention Motrr's Galileo as a preferred motorized pan and tilt head. Does your app have specific support for this product?

NM: The Motrr Galileo starts for around $150. It's a robotic dock that you can put an iPhone or iPad in. You can remote control it from another device. We were one of the first apps to have direct integration with the Motrr Galileo. If you're using Switcher Studio, there's actually an option in the settings to enable auto detection for the Motrr Galileo. If one of your cameras is attached to the Galileo dock, you can cue that up in the preview pane in Switcher Studio and move your finger across the screen, up, down, pinch in to zoom, and it will control that device.

RSN: Your iOS app supports iPhone and iPad cameras - are there any plans for Android or third-party camera support?

NM: The app is iOS only, so it's iPhone, iPad and iPod Touch… Eventually, we will have Android camera support. I don't have a definitive timeline for that. We do have a Mac screen-sharing options, so you can mirror your display from your computer and bring that in a one of your camera sources, so if you have a Powerpoint, Keynote or website you want to bring up, you can bring that in as part of your production. We have some users using the screen-sharing program Switchercast, with a capture card, to bring in other camera sources. It can be limiting that it's iOS only, but cameras on these devices are so incredible and, really, from a development and support standpoint, there are so many different Android devices and screen sizes, I don't know that we can deliver the same experience. We want to make sure we put people in a position to be successful and working with Apple products has done that.

RSN: You support a wide range of streaming video broadcasting platforms, like Twitch, ustream and Youtube. Are any of these platforms 'preferred', from a support standpoint?

NM: We've found a  lot of people have a platform that they are using, so they already have their 'home'.  But a lot of platforms are specific to different audiences. There's group like Stageit and Concert Window, for musicians and performances. There's groups like the Cube, that's primarily for athletics. Ustream has been around for awhile and they've done a really great job - very reliable. Youtube has rolled out a live video streaming service that's free. We find that a lot of our users are going to Youtube to do live video. It's just the place go-to place for watching on demand content and why not do live video as well. Twitch is gaming. While none of these platforms is going to ban if you're going to broadcast something outside their niche, but it can help in getting to the right audience that's in your space already.

RSN: Parting question: Is there anything else that we haven't covered that you'd like to communicate about Switcher Studio?

When we talk about platforms, we have specific tutorials on integrations that we know that work. The app works with a lot of places that aren't listed on the website - like if someone has their own Wowza integration, more than likely it's going to work with a platform doing something like that. One thing that's important with video that sometimes gets overlooked is audio. We have really good tools within Switcher Studio where you can monitor sound level. If you are using an audio adapter like an iRig, you can actually monitor the audio feed coming in, you can actually put on headphones and hear the audio coming into your app - there aren't' a lot of apps with that functionality. We also have Bluetooth audio support, so if you're doing a quick interview with a single person, you can actually use a Bluetooth headset as an affordable wireless mic, instead of using a $400 wireless system…. One of the first steps in making good videos is make it steady, get it on a tripod, have some kind of mobile media case, and think about audio - have good quality audio. So we try to have tools in place to manage those appropriate.