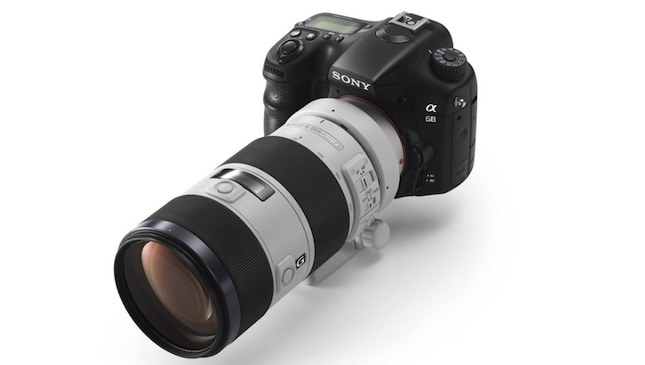 The just-announced Sony α68 interchangeable lens camera will likely arrive with a budget price tag, but its video recording capabilities might make it an attractive option for some professional work. And it passes some stringent broadcast criteria.

Last year, and for the better part of this year, 4K was an important theme when covering new cameras. At some point, though, our focus shifted away from profiling every new camera capable of acquiring some version of 4K video, because if most new cameras shoot 4K, then that feature, in-and-of itself, is no longer especially noteworthy. In fact, it's presently more surprising when we feature a camera that doesn't shoot 4K.

In that vein, the recently-announced Sony α68 is this week's surprise.

The α68 is the new entrant in Sony's line of A-mount cameras that sport translucent mirror technology, which allows some light to pass through to aid in phase detection autofocus. The camera is marketed with something called 4D Focus, which proclaims better autofocus behavior in all shooting conditions, with its 79 autofocus and 15 cross points.

Videographers should take note of the 24MP APS-C Sensor and its ability to shoot XAVC-S HD at 50Mbps at either 24, 25, or 30fps (it also captures in AVC). The ISO performance won't match something like the Sony A7s (or A7s II, for that matter), but the 100-12800 should be fine in all but the dimmest shooting environments.

Again, the lack of 4K shooting might make this camera a non-starter for many of our readers. But, please keep in mind that the Sony α68 will probably be situated at the entry or mid-level of its translucent mirror camera lineup. The price of the Sony α68 has not been announced, but it doesn't take much sleuthing to estimate a range.

The Sony α58, which the α68 either replaces or will be directly above in the pecking order, is priced around €600 (or around $650) for the body only. So, for roughly the same amount, the Sony α68 arrives as a still camera that could even satisfy the BBC's criteria for video acceptance, which is a 50Mbps Mpeg-2 HD stream. The XAVC-S codec is superior to Mpeg-2, so you could actually capture at higher quality at the same bitrate and convert to Mpeg-2 for delivery, which will yield a better result than if you were to capture initially at 50 Mbps Mpeg-2 or other lesser codec.

The Sony α68 is not a camera for everyone and will likely appeal to primarily to still photographers that will take advantage of the autofocus features, especially for fast-moving subjects. But the α68 could intrigue shooters who want a relatively-inexpensive means of shooting high quality HD for clients that aren't asking for 4K...yet.

Inheriting many pro-style features from the acclaimed α77 II, the α68 features Sony’s unique 4D FOCUS system that delivers extraordinary AF performance under any shooting conditions – even in lighting as low as EV-2 where other cameras struggle.

This phase detection system uses no less than 79 autofocus detection points including 15 cross points, plus a dedicated F2.8 AF sensor point for dimly-lit scenes. It all adds up to fast, wide area AF with predictive tracking that locks faithfully onto fast-moving subjects.And thanks to Sony’s uniqueTranslucent Mirror Technology, the α68 delivers constant AF tracking at up to 8fpsii continuous shooting.

Full HD movies use the efficient XAVC Sv format for high bit rate recordings at up to 50 Mbps with outstanding detail and low noise. And thanks to Sony’s unique Translucent Mirror Technology, you can enjoy non-stop continuous autofocus that effortlessly tracks moving subjects for crisp, professional looking footage, whichever format you choose to record in.

With a powerful array of creative features to explore, theα68 has plenty to offer experienced amateurs as well as step-up photographers and newcomers to interchangeable lens cameras.

Framing stills and movies is a pleasure through the clear, bright OLED Tru-Finder. 100% frame coverage ensures you see exactly what you’re shooting, with high contrast and faithful colour reproduction helping you focus manually with absolute confidence.

Complementing the Tru-Finder, the 2.7-type LCD monitor tilts up to 135 degrees upwards or 55 degrees downwardsfor comfortable composition from a wide variety of shooting angles. Serious photo enthusiasts will also value the backlit top display that allows quick confirmation of camera settings, whether you’re shooting handheld or on a tripod.

As found on the critically praised α7 series, there’s a control wheel on the camera’s rear that allows quick fingertip adjustment of camera settings. In addition, 10 customisable buttons[vi] can be assigned for instant access to frequently-used functions. There is a front control dial for quick adjustments of settings and a sturdy grip to ensure that you are balanced, even when using heavyweight prime or telephoto lenses.

SteadyShot INSIDE reduces the effects of camera shake for blur-free handheld shooting – at all focal lengths and with any compatible lens.

The inclusion of a Multi Interface Shoe and Multi Terminal lets you expand creative options further with a wide range of optional accessories, including flashes, lights, microphones and remote commanders.