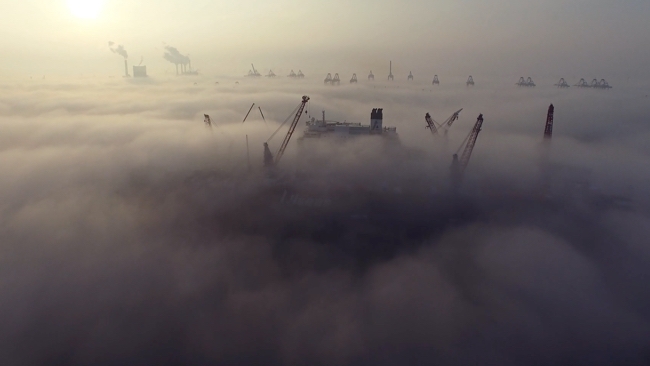 Drones can make magical movies. And none, so far, more magical than this.

The world's largest floating platform - a ship, in effect - is the Pioneering Spirit. Talking about the size of this thing is like trying to understand the dimensions of the Universe: you can see the numbers, but they're too big to mean anything.

Anyway, the displacement is 900,000 metric tons and it has eight twenty cylinder engines, each with a power output of 11,200 kilowatts. You can safely say that it's more powerful than a Bugatti Veyron, if not necessarily faster.

Just looking at this vessel is spectacular enough. It's like a floating town. But what if you could fly a camera drone around it and above it? And what if it was partially shielded in a morning mist? You'd have the industrial might of man against the gentle, cosseting touch of nature.

Surely that would make a good film?

And it does. See it for yourself below in Condept's short film.

But first, some production notes from Condept's David Tins:

Our team did a great job on this with a lot of passion for video and editing. Our client, IQ-pass, is a small player in safety and ‘gate management’. Our goal was to make them look big thru a high end spherical production. We aimed for this special weather for that magical touch. Thanks to the great collaboration with IQpass and Allseas we where able to catch this moment.