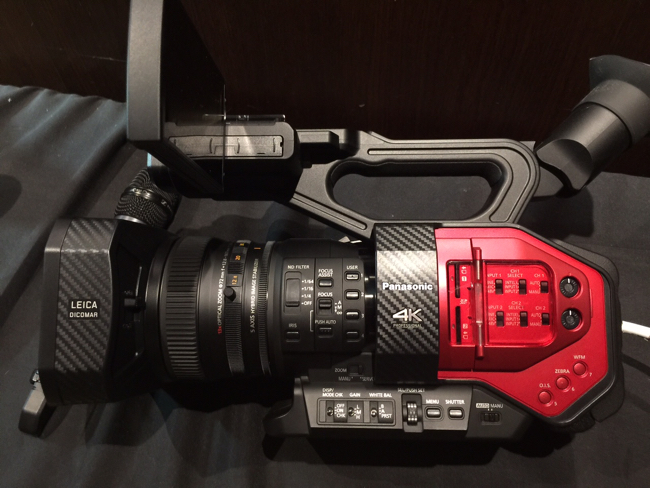 The AG-DVX200, the new 4K all-in-one from Panasonic, is an astonishingly capable camcorder as we found out this week at Panasonic's launch event in London.

It seemed odd that Panasonic, for a long time, didn't really have much to offer customers who were looking for 4K. It was all the more surprising when you recall that Panasonic was absolutely instrumental in the adoption of HD by the world's broadcasters.

The original Varicam was a very effective HD camera with an outstanding resume including the BBC's Life On Earth series - for many, the first real showcase for broadcast HD.

Leap forward ten years and there's a new Varicam, and it's rapidly gaining a reputation as a genuine player in high-end cinematography circles.

The new DVX200 doesn't aim so high, but, as we'll see, is no less interesting a device. In some ways, it's going to redefine what you can expect from a fixed lens camcorder.

Panasonic arranged a pre-IBC briefing for journalists on 1st September in London (in the rather quirky Groucho Club, a semi-legendary haunt of successful artists and entertainers in the heart of Soho). It was a chance for us to see some footage from the camera and to handle it ourselves.

Let me say right away that I was very impressed. The footage looked very good, and - this is always a good sign for a camera - it made me wonder how such high quality footage could come from such a small, relatively inexpensive device. (When I say "inexpensive", I mean that it is ten times cheaper than big, serious, cinematography cameras. And it includes a lens!).

The name of the camera, the DVX200, is clearly an affectionate reference to the earlier DVX100, a DV camera that could - uniquely - record at 24 frames per second progressively. This, thirteen years ago, gave it a cinema-like quality that quite possibly had as much of an boost to the digital cinema movement as Canon's later video-capable DSLRs.

Let's have a look at some specifics.

The camera is shipping at the end of September. Panasonic is taking pre-orders for it now. The list price in Europe is €4,699.

Aside from its success with its Varicam cameras, Panasonic has always had a very strong slant towards ENG-style camcorders, but the market for cinematic cameras has grown so strongly over the last decade that Panasonic wanted to increase its presence. And it has chosen to do this in a very distinctive way.

In fact, they've done it in a unique way, because the DVX200 is the world's first large sensor 4K handheld fixed lens camcorder.

I've always liked the idea of fixed lens cameras. While you don't have the ultimate flexibility of an interchangeable lens system, what you do have is the knowledge that you are all set up, ready to go, whatever the circumstances. There's another important point too. With a fixed lens, the camera is optimised totally, one hundred percent, for that lens. This could include digital and optical correction for all sorts of common lens issues.

All of this would only make sense if the lens was good in the first place, and with the DVX200, it certainly does appear to be. It's a new Leica DICOMAR 13 x zoom. In addition, there's a hybrid (ie a combination of optical and digital) 5-axis stabiliser.

We are still waiting for the final details about the sensor. We understand that it may have an ultimate resolution of 16 megapixels. Whatever the exact figures, we do know that it must have more than the native 8 megapixels needed for 4K because of the digital stabilisation. We were told that this is NOT the same sensor as in the GH4. It is, apparently, better.

The overall (and, as ever, somewhat subjective) dynamic range of the camera is 12 stops. It can use a logarithmic mode called V-Log and, importantly, this is the same as found in the GH4 and the Varicam. Maximum framerate is 24fps when recording in DCI 4K, 60 fps in UHD and 120 fps in Full HD.

The DVX200 shares some things in common with the GH4: it has a 4/3 type sensor (again, not the same one as the GH4); it has the Panasonic "Venus" processing engine; it can record using V-Log L, and it has the same recording codecs.

The camera can record UHD internally at a maximum of 150 mbit/s at 60fps. The video is recorded at a bit depth of 8-bits and at 4:2:0 colour subsampling. For higher quality, full 10-bit, 4:2:2 is output through the HDMI port, for recording on an external HDMI recorder like the Atomos Ninja Assassin. This, in a way, is the best of both worlds, because the 8-bit 4:2:0 footage looked very good, and 10-bit, 4:2:2 would require a lot more data. 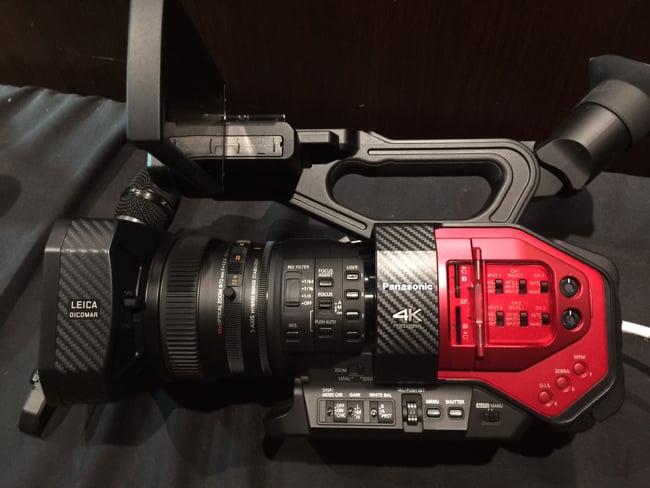 We watched in native 4K at close range, first on a domestic 4K TV, and then on a professional screen: much smaller but with noticeably better colour and resolution.

At all times the footage from the DVX200 looked really good. This wasn’t a scientific test, but, subjectively, this looks like a camera ready for anything. Ungraded footage recorded straight (without the V-Log setting) looked vibrant and real. Graded footage - shot with V-Log - looked cinematic. There’s no doubt to me that if you’re making a feature film or drama on a budget, this camera, with its Leica lens, is absolutely worth considering.

Some people suggested that the footage sometimes looked too sharp - as if some artificial sharpening had been applied. I could see why they might say that but I think we should also allow the possibility that it might simply have been very sharp. One or two people also said that there was some noise in the shadows. We were reminded that when these films were made the cameras were early engineering prototypes. There would still have been a lot of work to do to improve the images. But, even if these shots were representative of the final output of the shipping version of the camera, I saw very little to discredit it.

In a way, this is a truly unique class of camera. It’s the first time that I’ve seen a device that I would consider buying in preference to an interchangeable lens camera. Just think about the advantages. You don’t have to pay extra for lenses, and you will never miss a shot because you’re changing glass. For some people, in some circumstances, that’s the most important thing. For others, maybe on a budget, here’s a camera that certainly appears to be able to do almost anything to a very acceptable quality, at a fixed, reasonable price. 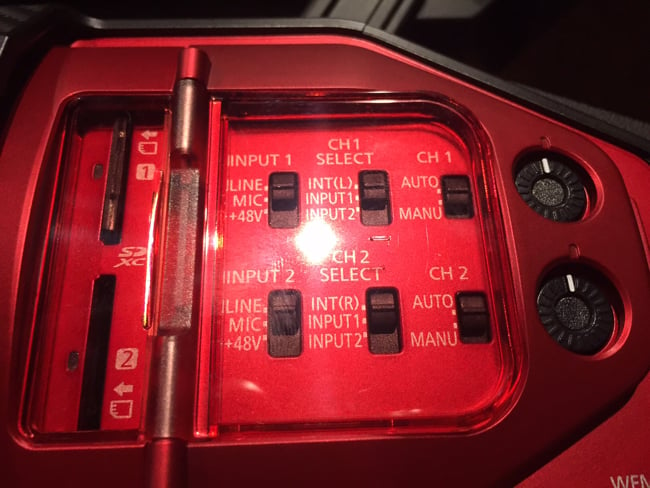 So, don’t be put off by the fixed lens. Be encouraged by it instead.

The fascinating thing about the DVX200 is that it seems like the the result of a question that no-one was asking: "Can we have a fixed lens 4K Micro 4/3 camcorder?". But, having seen it, and tried it, it does seem to be a very good answer indeed.

Here's some footage by Sebastian Wiegärtner. As he said, it's heavily graded, with some added film grain (don't mistake this for a noisy sensor!). And I think it looks very cinematic. (Remember - you're watching this on the internet. Good though this looks, it did look significantly better in real life, on a 4K screen).

And here are some tests by Emilie Auje: