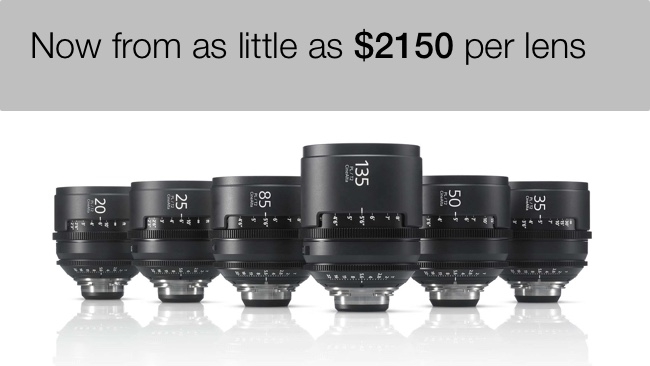 Buy all six lenses and the price per lens drops impressively

Sony’s second generation CineAlta lenses have been unfairly overlooked, but they could herald a true shift in the price we have to pay for decent quality PL mount glass.

For those working on higher end cameras with PL mount as standard there is in some ways a quite limited range of lenses available. They are the best lenses in the world from companies like Cooke and Zeiss but they come with the price to match and older vintage cinema lenses that were easier to adapt to PL mount were all snapped up very quickly when the Red One camera first arrived in the world. There are now emerging some cheaper options for those who need real cinema lenses with long focus throws, very high quality housings and mechanics, and these lenses represent something of a budget option when working with PL mount. They are also low cost in terms of real cinema lenses too, although the price is still a little eye-watering for those used to working with cheap stills lenses for their video work.

Not so long ago I wrote about the new cinema quality Rokinon lenses that are available in PL mount (as well as Nikon F and Canon EF mounts). The RRP was a rather unheard of $2500.

However there is actually another budget option for those restricted to working with PL mount lenses and that is the latest version of the CineAlta lenses from Sony. The original version of these lenses was a set of three primes that came bundled as an optional extra when you bought the Sony F3. They have a rather unfortunate reputation as, although the actual glass was very nice, the housings were the sort of plastic things that you might expect from budget stills lenses. They were still remarkably cheap when they came out though, so they won some adherents simply from an incredible value for money angle.

What’s more, Sony ended up developing a completely new second edition of the lenses with great build quality, long focus throws and robust metal housings. They were designed with a circular aperture and 9 leaf iris to boot, so the new lenses are actually very nice indeed. These came in a set of 6 which consisted of: 20mm, 25mm, 35mm, 50mm, 85mm, and 135mm all with a maximum stop of T2 when wide open.

The reputation of the Series 1 CineAlta lenses has cast a long shadow over the new edition despite the fact that the updated lenses are great. It might be for this reason or perhaps the downward price pressure coming from the incredibly beautiful and well designed Schneider Xenon lenses that has caused Sony to slash the price of the set of 6 lenses. Incredibly they are now selling at B&H for only $12,900 which works out at just $2150 per lens which is even cheaper per lens than the Rokinon Xeen lenses (although I've yet to find out if there is a special price for a set of 3 Rokinon Xeen lenses over buying them individually).

The Sony lenses actually make great images. They are quite sharp and some people describe them as being more "realistic" or "neutral" in terms of colour representation. I usually like the vibrant colours that you can get from lenses like the Schneider Xenons but I was surprised to find that I like the Sony lenses a lot too. I actually really like them for their different look, with out of focus backgrounds almost taking on a more watercolour type of appearance.

These lenses are great as a contrast to other lens sets out there as having the choice of different lens sets (if you’re renting, that is) gives you more creative options with the overall look of the footage. They do though only cover Super 35mm and have a maximum aperture of T2, whereas the Rokinon Xeen lenses go as far open as T1.5 and are capable of projecting an image circle large enough to cover full frame sensors.

Of course there is a third option too: saving up the extra money for the Schneider Xenon full frame lenses - but that’s something else again!