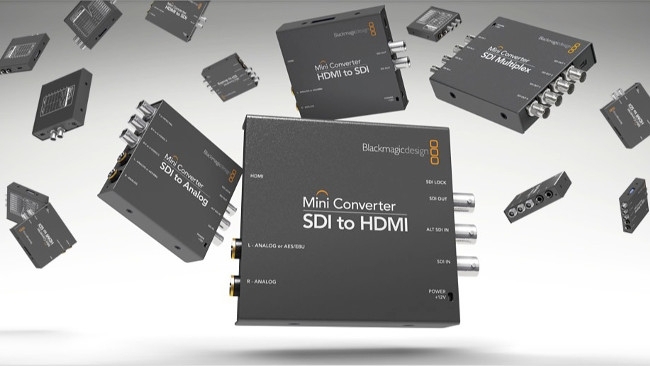 Return of the old guard...

Blackmagic is cutting prices on its HD and UHD Studio cameras, prepping its URSA cameras for the arrival of the URSA Viewfinder, and bringing back its 3G Mini Converter range at a lower price point. Phil Rhodes & Patrick Taylor report.

Blackmagic Design has dropped the prices of its Studio camera line. The HD Studio camera dropped from $1995 to $1695 and the UHD model from $2,995 to $2,455. Apparently, this price reduction was made possible through user feedback, which indicated that most users were not taking advantage of the optical fiber connection. Blackmagic has removed the fiber optic connection for shipping units. Those that require fiber (and the long distance cabling that it makes possible), can purchase a third party SMPTE optical fiber SFP module.

First announced at NAB 2015, the URSA Viewfinder, in all its 1920x1080 OLED glory, has begun shipping this week. At just $1495, it's a great value for a full HD viewfinder and a near 'must-buy' for URSA users. In order to ensure smooth interoperability between the URSA and its viewfinder, Blackmagic has released yet another firmware update, Blackmagic Camera Setup 2.6 (available for download on the Blackmagic support page), which should ensure compatibility at the outset, along with other performance enhancements for the URSA.

The Blackmagic URSA Mini and 4.6K variants are still slated to ship this month, according to the company's site.

The return of 3G Mini Converters

The introduction of 6G-SDI UHD Mini Converters to the Blackmagic line-up effectively made the old 3G-SDI models obsolete. Who would buy the 3G-SDI models when the 6G models arrived at the same price? Blackmagic has since reduced the component costs for the 3G-SDI Mini Converters, bringing them back to market at $195 ($100 less than previously listed for most models; $300 less for audio models). Here is the list of 3G-SDI making their return:

"What's happened here is so unusual that there really isn't a term for it, so we'll just say that Blackmagic has released an exciting range of brand-old products. Well, not old. Let's say classic.

"Blackmagic's fame in the field of boxes which turn signals into different signals knows almost unparalleled; its range of converters with inbuilt battery power have been saving the shoe leather of grateful technicians ever since they were released. Blackmagic is also known for pushing the limits of rapid progress, with six-gigabit SDI products arriving to market almost immediately after the standard was ready to deploy (and protected by the reconfigurability of FPGA-based electronics). Progress has its victims, of course, and these included the company's range of three-gigabit mini-converters, which were deleted when it became clear that the 6Gbps versions would be more capable for exactly the same money and perfectly capable of working with 3Gbps signals, as well.

"Hard to argue, of course, until it was realised that a renegotiation of parts sourcing for the older 3Gbps converters could realise meaningful savings. As such, the previously deleted range has now been re-released at US$195, including converters from SDI to both HDMI and analogue, HDMI to SDI, an SDI audio embedder and a de-embedder, and a distribution unit. The new pricing for these 3Gbps converters represents a $100 reduction for the video converters and an eyebrow-raising $300 off the previous retail price for audio-oriented devices.

"With the widespread uptake of 4K and UHD still stubbornly niche, a huge range of applications remain for 3Gbps SDI and the devices which use it, even if only as secondary monitoring on productions aiming for a beyond-HD finish. It would be easy for a company to concentrate on what are probably easier-to-sell products with a larger margin and bigger numbers on the packaging. Blackmagic's economically-minded engineering, therefore, deserves the gold star of merit for a practical approach to ensuring that important, useful devices remain available."