Pricing announced for the Panasonic DVX200 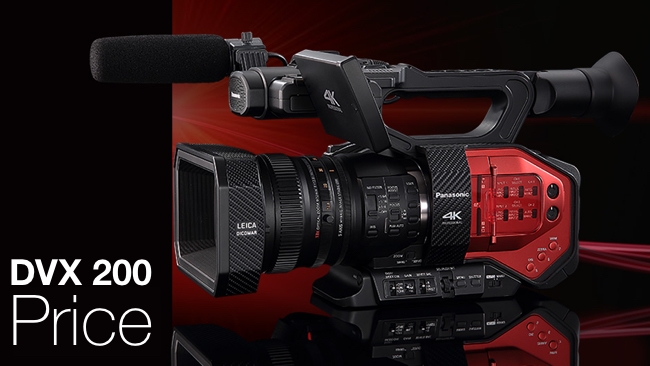 We’ve had the first look and we’ve seen the first footage, now we get news of the official price of the eagerly-awaited Panasonic DVX200.

According to our contacts with the UK dealer networks the official price of the DVX200 4K is going to be £3420, though this is in fact a pre-launch promotion and includes two free 64GB SDUC 4K2k Class 10 SD Cards providing an order is placed before the end of October 2015.

Given the keen competition between resellers, we would expect that street pricing is probably going to be lower.

The pre-production models of the unit have been greeted with enough acclaim that that doesn’t seem very expensive at all, and indeed it showcases rather baldly the changes in price/perfroamcne that have occurred in recent years. All in all, the DVX200 is roughly £1000 cheaper already than the extremely popular AF101 was at launch in 2010.

That particular camera’s successor, 2012’s AF101a, has come down now to approx £2.6k (body only), and you can reasonably expect the DVX200 to follow the same sort of pricing curve over future years. When the new camera is described as a gem, however, you might not want to be waiting too long.

You can read Richard Payne's exclusive first look at the DVX200 here: The 4K Panasonic DVX200 - "The most exciting camera since the AF101"?

We've also got a link to some early footage taken by Sebastian Wiegärtner.