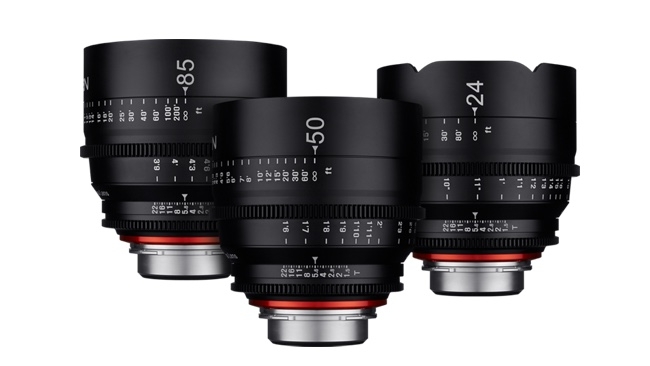 There has been a lot of excitement the last few days about a new set of PL mount lenses from budget South Korean lens manufacturer Rokinon. The new lenses are called XEEN and unlike their earlier attempt at cinema lenses, the Rokinon Cine DS lenses, these units actually have very nice lens housings. It is apparently the same glass as in the earlier lenses but there are new coatings, and Rokinon is also promising an improvement in the finish of the glass (and of course the earlier lenses weren't available in PL-mount, only Canon EF, Nikon F and Sony E mounts).

High quality, metal lens housings with a PL mount are enough to get a lot of people excited in itself. Add a low price, and at a RRP of $2450 per lens the price is certainly low, and you can see why they are causing such a fuss.

The Rokinons even have the option to swap out the mounts for a wide variety of others such as Canon EF, Nikon F, Sony E, or a MFT mount although this needs to be done by a lens technician to get it right. You can, if you want, also buy the lenses in those mounts to start with for the same price as the PL mount, but of course there are a lot of cheaper lens options when you step away from PL mount so it might not be as much of a draw.

The lenses have smooth focus with a long throw and industry standard 32-pitch focus gears so pulling focus should be more than possible both manually or with a FIZ type system. The lenses are also easy to swap out quickly as they are all matched lengths, the focus and iris gears are in matched locations and the front diameter is a common 114mm across the set.

Obviously there are no click stops on the iris either.

Other headline specs are a maximum stop of T1.5 (although as with a lot of lenses I wouldn't expect them to be at their best wide open) and an image circle that covers full frame, and not just Super 35mm.

Rokinon is starting out with a set of three lenses — 35, 50, 85 — but has already announced that it is working on further focal lengths to add to the set.