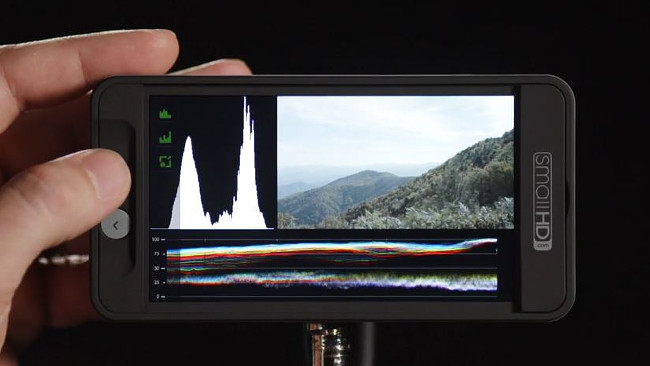 SmallHD just released a significant firmware update to its popular 500-series of field displays, including expanded LUT capabilities, RGB waveform parade, anamorphic desqueeze and more. But does this mean the 500-series monitors are now 'feature-complete'?

We've been impressed with SmallHD's displays ever since seeing their DP7 at NAB 2014. SmallHD has been among the first wave of manufacturers to exploit of recent improvements development speed of embedded electronics. The coincidental availability of high-performance displays intended for portable devices has made some very interesting things possible. Since the DP7, though, other companies have also made great gains using much the same techniques (particularly, monitor-recorders from manufacturers such as Atomos and Convergent Design) and the race is far from decided.

Performance constraints and the pressure to innovate

There are two limiting factors to the performance of this variety of modern electronics. The first is the capability of the reprogrammable logic arrays used to do the heavy lifting of signal handling and picture processing, a capability which is controlled by cost and by power consumption. Many companies deliberately over-specify capacity in these areas in order to future-proof the product against unforeseen requirements and unanticipated competition. This is especially true for film and TV industrial products, where the value of the components is often a comparatively small part of the overall cost of production.

The second and perhaps most significant limitation is the time required to develop software to exploit the capability of reprogrammable hardware. This is such a significant factor that we're all used to seeing products launched with incomplete firmware, whether the manufacturer is willing to admit that or not. It's becoming increasingly commonplace to assume that new features will be made available in a product's future, perhaps long after launch. This creates a taxing situation for manufacturers, who must dedicate expensive development time to firmware updates, effectively continuing the design effort even after the product has been released.

It's therefore reassuring to see SmallHD release the 2.0 update for its 500-series monitors, an update which includes significant new toys. The feature listed first is the downstream LUT facility, which allows the monitor to act as a processor, applying a lookup table representing a calibration or creative colour alteration to the output data. This, in concert with the new ability to cross-convert HDMI and SDI signals, potentially removes the need for separate LUT and conversion hardware dangling off the back of the camera and the associated clutter of signal and power supply cabling. There's a warning that SDI doesn't necessarily support every signal format that HDMI does and, of course, there's often tricky issues with signal formatting in situations such as this, but none of that is SmallHD's problem and the feature is welcome.

There are sundry other improvements, such as a 1.5x anamorphic desqueeze mode, for shooting scope pictures on 16:9 sensors, and the ability to snapshot images to an SD card with the LUT applied. However, the main event is clearly the downstream LUTs and the RGB waveform parade, which is also new. There's just one known glitch inasmuch as audio data isn't passed to the monitor's outputs, but given the pace of development, it's probably reasonable to expect a patch. Whether this marks the end of significant updates for the 500 series monitors is another consideration, especially since the feature set now seems reasonably complete, but again, that's the biggest advantage of current embedded electronics: the possibilities are limited only by software engineering hours and imagination.