Making a film with a crew of one 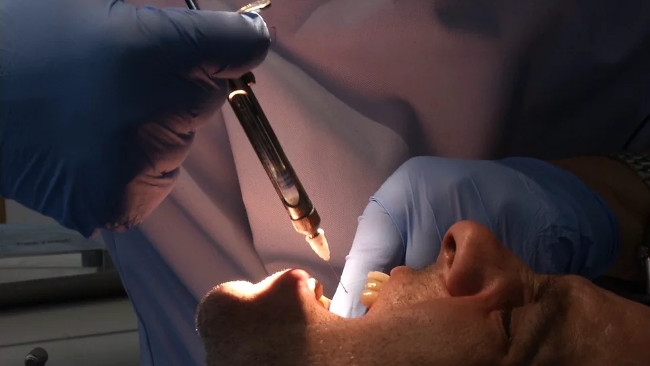 Roland Denning on documentary filmmaking when you are your only crew.

In my time, I've worked in a variety of ways, as a DoP and a documentary cameraman on projects large and small and, more recently, as a director and producer, but I still find time to work on my own personal projects.

Derek The Dentist is a film I made about my local dentist and the final weeks of his practice. I'd been going there for about 10 years and I'd always thought there was something extraordinary about this eccentric two-person business and the relationship between Derek and his long-standing assistant/receptionist/nurse/verbal sparring partner Lesley, particularly the bizarre and hilarious conversations they had when you were stuck speechless in the dentist's chair.

Derek finally let me make the film only when he had decided he was going to retire. It was shot over a month entirely on my own. Now, I know I've written before about how important a sound recordist is, so you can accuse me of hypocrisy for not having one but, for a variety of reasons, it just was not possible here. I also cut it myself (in Final Cut Pro 7). If I'd had a budget, I would have employed an editor. But I didn't.

The film was shot on my Panasonic HPX-250, a good everyday doc camera. It uses a great codec (up to AVC-Intra-100, although this was shot at AVC-Intra-50) and has a 22 to 1 zoom lens; this is just the sort of film that could not have been made on a large sensor camera with a short zoom. The HPX-250 is sometimes referred to as a 'run and gun' type camera; I don't really like that phrase, as there is no running or gunning in this film, but I do make full use of that zoom lens. As far as I am concerned, documentaries are about people, not beautiful pictures, and people move around all the time. Nothing was set-up or rehearsed for the camera; this was all how it happened.

For audio, I used two radio mics (mostly a Tram/Sennheiser combination) and an on-board mic, either a Rode NTG2 or a Sennheiser 416. The camera has 4 audio channels which would have been great on this sort of project, except that 2 channels are dedicated to the almost completely useless camera mics. I didn't use a mixer (it would have been another thing to carry), but plugged the mics directly into the camera inputs.

Surprisingly, most people agreed for me to hang around in the dental surgery while their teeth were being done (perhaps they appreciated the distraction), but I tried to keep as low-key as possible. I make no attempt to hide my presence in this sort of film. I quite like subjects occasionally talking directly to me, rather than pretending to be invisible.

This is one of an intended series of films about my part of London. It's a small, low-key film, not about any earth-shattering issues, but about community, work and ageing. And teeth. And watch out for the very brief guest appearance of Julie Christie (yes, that Julie Christie).