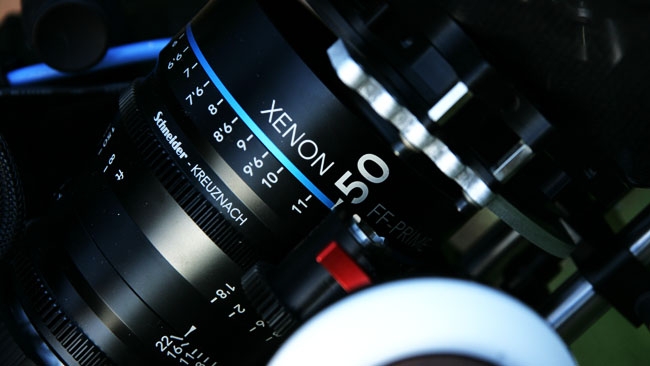 While prepping an article on the AJA Cion, RedShark Technical Editor, Phil Rhodes, had a chance to use a set of Schneider's Xenon FF-Prime lenses. Here, he gives his opinion on the set and some thoughts on prime lens usage in general.

An incidental pleasure associated with our recent Cion coverage was the accompanying selection of Schneider-Kreuznach's Xenon FF-Prime lenses, including the 50, 75 and 100mm members of the product line which were available. The Xenon FF range is interesting because it seems to be a design response to a problem created by the enormous diversification of cameras, from low-cost, high-capability devices like the Sony FS700 to DSLRs and all the way up to the high end, all of which are at least sometimes applied to ambitious work that needs good glass on various mounts to cover big sensors.

As such, this is less a review than a discussion of the state of prime lenses for drama in general, although we'll talk about the FF-Primes in particular, as well. Just as we recently thought about ENG-style zooms for single-chip cameras, this is about the provision of glass for more considered, single-camera drama situations. Options here range from re-purposed stills glass, which can mean anything from clamp-on gear rings to professional rehousing, through old Russian glass right up to full-blown movie primes. The FF-Primes sit firmly in this latter range, priced at about £3000 per prime lens and therefore about two thirds the price of a similar Cooke S4, but with considerably greater coverage and with a little more speed.

Stop! Wait! Move that mouse cursor away from the comments box. It's as well to be clear at this point that making purely numeric comparisons on lenses at this level begs the sort of disagreement that's generally expressed with a lot of hand gestures and extremely general adjectives, because glass is a religion. In a purely technical sense, optically speaking, an objectively good lens is one with lots of sharpness and contrast, no flare, ideal geometry, no breathing and perhaps a few other attributes around its imaging performance and physical layout.

No such lens exists, of course, but this is, arguably, what Zeiss (and probably Schneider) aim for. It isn't entirely what Cooke aims for, at least in part, with its deliberate pursuit of lenses with (what we might carefully refer to as) a limited degree of optical personality.

Of course, when considering investments on this scale (let's say £18,000 for a set of six FF-Prime lenses), there are of course more considerations than simply the artistic. As an ownership proposition, though, it would seem to make more sense to own a clean, more generally usable, less obviously affected lens and achieve a given look with other tools such as lighting, camera setup and, of course, filtration.

At this sort of price point though equipment tends to be a rental, so we have the choice on a per-production basis. On a costume drama, we might opt for something with a warmer, less harsh appearance. On a science fiction movie, a clean image might be more desirable. That being the case, one might choose to rent Schneider's FF-Prime range on the basis of its coverage of large-sensor cameras, including things like the EOS-5D DSLR, but potentially also things like RED Epics with big sensor sizes selected and high-framerate cameras for slow motion work. They will not, incidentally, satisfy ARRI's upcoming Alexa 65, which requires an image circle nearly 80mm in diameter to cover its enormous sensor. The FF-Prime range offer interchangeable mounts compatible with conventional PL cameras, as well as DSLRs from Nikon and Canon, making it a more general-purpose investment whether they're to be owner-operated or made available for hire.

What to expect from Xenon FF-Primes

What one gets for £3000 per lens is speed, optical performance and a lot of convenience. The primes are, so far, all the same shape and size, so that lens accessories (mattebox, remote follow focus and so on) can be left in place during changes. Most of them are the same weight, so pan-and-tilt heads and stabilisers don't need more than trivial rebalancing. There's lots of focus rotation (though that does really demand a clamp-on follow focus) and gearing on the focus and iris controls goes without saying. Focal length, stop and focus distance are boldly marked.

Picture-wise, things continue well. Even firing a flashlight directly into the lens reveals exceptionally well-controlled glow and veiling, almost to the point where one might wish for a little more characterful flare. Many things that DSLR lenses do poorly, the FF-Primes do well, including both an almost total absence of breathing and excellent corner-to-corner sharpness at their T2.1 maximum aperture, which makes sense, given that a Super 35 imager such as the Cion's is only seeing the centre of the FF-Prime's field.

This can be a double-edged sword, given the greater resultant effective magnification, but Schneider knows that PL mount primes will inevitably be used on Super 35 sensors and performance remains good. There are cinema primes which exceed the FF-Primes in these areas, but for a lot more money. What's particularly notable about Schneider's product is that it achieves a lot of speed and a large image circle simultaneously in a physical package that, while far from small, isn't outrageously bloated.

Overall, then, it's quite clear that anyone moving up from camera packages using servo-operated EF lenses will find the FF-Prime series a pleasure to use. If one had to find a criticism, some aspects of the specification might provoke confusion; the full-frame coverage and DSLR-compatible mount options beckon people with 5D Mk. IIIs, but the lenses are really too expensive for that sort of owner-operation, spectacular as the result might be. The intention is clearly to provide something flexible and widely applicable to the rental market. There are many EF-mount Canon C500s out there which will be happy to meet the FF-Prime series. Canon, for that matter, also provides competition with a six-lens set of CN-E primes going for perhaps £15,000, making them on average just a little cheaper than the FF-Primes, but otherwise of broadly similar paper specification.

The real concern, if it can be described as a concern, is that the FF-Prime series are sufficiently clean and precise as to be almost personality-free and, again, that's especially true in comparison with the old 1980s Nikon and Canon glass that's frequently being dragged out of storage and coupled to modern digital cinematography cameras. Given the criticism often heaped upon those cameras for their lack of distinguishing quirks, such clean glass might not be the most obvious choice. Or perhaps it might, along with a side trip to the likes of Tiffen...