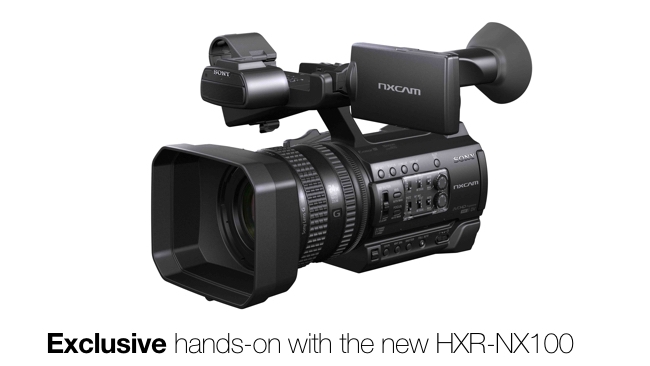 Last week, RedShark Technical Editor, Phil Rhodes, got an exclusive look at a pre-release prototype of Sony’s latest entry-level camcorder, the HXR-NX100, and he reckons it could be a very interesting release indeed for the budget-conscious videographer.

Until Sony introduced the PXW-X70, the only route to a small, portable camera with anything other than a very small sensor was to buy a DSLR. Competing three-chip CMOS cameras can have good overall imaging performance, but the complexities of creating wide-angle lenses with a difficult retrofocal layout invariably involves a certain degree of compromise.

A rather different compromise is imposed on anyone deciding to go for a video-capable stills camera, and much as the company has recently done well in this field, with the widely-adored Alpha 7s, people with an interest in XLR audio, long battery life and a standard handycam ergonomic setup and physical layout might reasonably prefer something else. It's possible to add XLR audio input to the 7s via it's Mi Shoe hotshoe, but the resulting configuration lacks some of the compact unobtrusiveness that people use DSLRs for in the first place.

The forerunning PXW-X70 itself includes some interesting new ideas, being based on a one-inch, 20 megapixel imaging sensor. That in the NX100 is reportedly based on similar technology. We've written extensively about how oversampling helps, shrinking noise, moire and the artefacts of Bayer colour reproduction simply by averaging them out. There are disadvantages to a high-resolution sensor, of course; proportionally smaller photosites are less sensitive, requiring greater gain for a given absolute sensitivity and therefore more noise. Whether or not this situation turns into a zero-sum game is dependent on the degree of oversampling and – to a lesser extent – on the technological sophistication inherent in the specifics of the sensor design.

Overall, though, since an HD image comprises about two megapixels and the sensor in the NX100 offers around twenty, the oversampling factor is really very large and these advantages should be well expressed in the NX100. This configuration also permits Sony to offer some of the key advantages of the X70 in this camera, about which more below. Visible wobble due to rolling shutter, incidentally, is extremely well controlled.

As a member of the NXCAM lineup, the NX100 does offer the lower-rate, 24-megabit recording in AVCHD, although, as with the 7S stills camera, there is an XAVC-S 50-megabit mode available too. This distinguishes the NX100 in terms of recording options from much more expensive cameras in the PXW range, which are capable of the higher-end, hundred-plus-megabit intra-frame modes included under the general heading of XAVC-I. The advantage with the NX100 is that Sony feels secure in offering recording to SDXC cards, albeit with some guidelines on the required performance. The reality of this situation is that all but the very poorest-performing SDXC cards will handle 50-megabit, or even 100-megabit video (equivalent to 6.25MB or 12.5MB per second respectively) with ease and this implementation of commodity storage is a welcome development.

We'd like to see it on other cameras, including higher end options where formats such as CFast are likely to be appropriate. Commodity flash is inevitably more affordable and available than a manufacturer-specific option. While the NX100 is determinedly an eight-bit camera and has no SDI output, there is an HDMI port via which uncompressed images are available, which could be recorded externally should circumstances demand a more cautiously compressed recording. Sony's literature (and basic mathematics) suggests that a 64GB SDXC card should provide a bit less than three hours of 50-megabit recording, and there are options to relay between the two card slots for effectively unlimited continuous recording.

Having considered sensor and recording, the remaining key piece of engineering is the lens. We don't expect a fully mechanical, lightning-fast, 20:1 zoom on a camera at this price point, but the quality of the lens, particularly terms of in its ergonomics and operational handling characteristics, is key to the usefulness of a small documentary camera such as this one. The inevitable servoactuated zoom is never a welcome discovery, but it's no worse than the competition and the focus action is, thankfully, fast and responsive. There is no softness during fast zooms (or at least, as fast a zoom as is possible) as can sometimes be visible on cameras with manual zooms using automated servo focus tracking.

Optically, the lens closes down from a rapid f2.8 at the wide end to a respectable f4.5 on the long, which is fine for a 12:1 zoom with a 9.6mm wide end. That wide end, incidentally, may sound rather inadequate for a camera that's likely to be used handheld for a significant proportion of its working life, but on the big one-inch sensor – which Sony tell us is about the size of a super-16mm film frame – it's fine. It isn't wide in the way that a £20,000 broadcast zoom in the low single digits is wide, but it's wide enough. The lack of any requirement for an optical relay group capable of landing the image on a three-chip block is clearly an advantage here, as is the lack of a need to create an extremely short focal length in order to achieve a usably-wide field of view.

To round off our description of the available facilities, viewfinding is good. Sony's whitepaper on the camera talks, in the usual nomenclature, of 1.56-million dots on both the flip-out TFT and the loupe viewfinder. Taking into account the fact that this will include the red, green and blue elements, the figures suggest a device with around 520,000 actual RGB pixels. This equates to a display of roughly 960 by 540 pixels (which would require 518,400 pixels), or a quarter of the full HD image.

Viewfinding is a bugbear of essentially all cameras at the moment, recent developments in full HD viewfinding at this year's NAB notwithstanding, and this is an entirely normal provision at this level. There are the usual options to zoom in to the image to check focus and the sensor is in an intermediate size range that doesn't create critical focus issues on every shot. Notably, the design engineers on this camera should be congratulated for having achieved extremely low viewfinder latency, considerably better than that on the much more expensive PXW-X180, which suffers about the maximum usable lagginess. The NX100's viewfinder must logically suffer some delay compared to the reality being photographed, but, as with the rolling shutter wobble, it is imperceptible.

That, then, is the acquisition technology on offer here. The camera we saw, at Sony's Digital Motion Picture Centre Europe at Pinewood Studios, west of London, was a prerelease prototype running unfinished firmware, and this article should be read with that in mind. In particular, the feature that Sony call clear-image zoom, which uses the excess resolution of the sensor to produce a true digital zoom without the usual catastrophic falloff in image quality, wasn't active. This is a nice feature which eases the need for a long zoom range (the built-in lens is an 11:1), and although it isn't perfect, with slightly increased noise depending on the zoom level in use, it's a good application of the high resolution sensor. There were also a couple of irregularities with achieving fully independent and manual iris, shutter and gain selection, which may have been either finger trouble or firmware. It's a safe assumption that these and any other glitches will be fixed before units ship, and we're happy to preview the camera on that basis.

It's aimed at, and will certainly be most attractive to, people in the most cost-conscious parts of the wedding, documentary and news markets. Although broadcasters prefer ten-bit cameras, there's really no reason broadcast news couldn't be shot on the NX100. Power consumption is five or six watts, according to the spec sheet, which makes for healthy runtimes, and the battery bay is recessed deeply inside the body so that even large batteries don't create a handling problem. This, along with the light weight and compact dimensions, suggest that the electronics in this camera are mainly limited to the optical block and probably a single main PCB. It's small and light and at a street price of probably around £1300, it's pretty cheap too. The size brings discretion and a lack of attention which might attract the sort of videojournalist who prefers to observe while being largely unobserved.

The user interface is clearly based on code written for many other current Sony cameras, and is of the same style as cameras from FS700 onward. Controllability is fast and responsive and all the usual options are present. Sony seems dedicated to the idea of referring to picture style presets by numbers, which is uninformative at best, and with the prototype lacking a manual there's no way to elucidate what the intention for each style really is other than by subjective examination. Still, the capabilities seem about as comprehensive as much more expensive cameras, which is nice to have.

The only real criticisms the camera might attract concern feature choices which have clearly been made to keep the price under control. There's no SDI, although this facility has always been missing from cameras under a certain price threshold. The HDMI provided doesn't, of course, have a locking connector - so you need to be careful with it in the field.

Such a high pixel count on such a comparatively small sensor – compared, say, to super35 – doesn't raise hopes for enormous dynamic range, regardless the other advantages. The viewfinding technology is hardly up-to-the-minute, but it's reasonable for the money. It's hard to be too concerned with niceties like WiFi and ethernet connectivity, which will only be useful in very specific circumstances.

We'll do a more in-depth review, perhaps closer to the anticipated October release date, but the NX100 represents a clear intent to provide an entry-level camera and the configuration makes complete sense in that context. In many ways, and especially with regard to cameras of a decade ago, it makes the higher-priced options look rather cluttered in comparison.