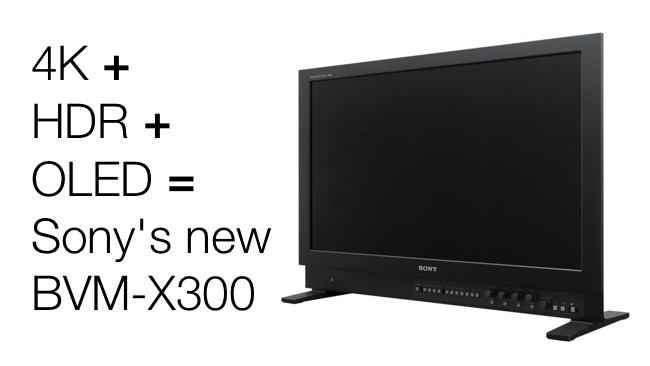 Sony, anticipating that high dynamic range 4K is the next evolutionary step for production workflows and eventually consumer displays, debuts the BVM-X300 4K OLED monitor with a million-to-one contrast ratio and a much wider color gamut. By Neal Romanek.

We all felt something was missing from 2014's "4K will save us all" discussion. Broadcast industry manufacturers began to sell us on the idea that 4K video would be so detail rich, that no other standard would be needed for some time to come.

Indeed 4K or Ultra HD images do present detail at a stunning level, but as professionals started to get their hands on 4K hardware and began to consider the implications of a 4K pipeline, it became obvious, even to the faithful, that higher resolution wasn't the holy grail that some might have hoped it was.

In fact, the emphasis on resolution and sharpness threatened to become an endless rabbit hole, with resolution-tweakers obsessively upping the ante on what would be the ultimate resolution of the future (4K? 8K? Fully immersive 16K?). The chasing after of greater resolutions seemed to ignore the practical requirements of creatives, broadcasters and vendors, and seemed based on the assumption that what viewers want is not to see an image, but to look through a window onto the world. This sharpness obsession and resolution chasing is what make things like the Lawrence Of Arabia 4K restoration almost unwatchable, with individual camel hairs competing with the faces of the actors for attention, and an approach that assumes the grain and organic warmth of film is a mistake to be corrected.

What became clear is that a host of industry standards set up early in the last century, not just resolution, needed to be upgraded in order to truly revolutionize image capture and display. Sports broadcasts and documentary could benefit from higher frame rates, for example – a large 4K image captured only at 30fps produced an irritating visual judder during moments of action. But the real linchpin of next generation imaging seems to be High Dynamic Range.

HDR demos always leave people with the impression that they are seeing something entirely new – and there's some truth to that. Dolby Vision, a proprietary HDR format, has wowed the delegates at trade shows by showing off color and image information that essentially was invisible before.

One reason for the HDR wow-factor is that HDR images take advantage of the way the human eye actually sees. At an HDR presentation at London's TV Connect conference, engineers at Ericsson pointed out that the human eye is actually a fairly primitive image gatherer and that how we acquire visual information doesn't actually square with the 'lens and sensor' model of a camera. The human picture of the world is actually built up over time by repeated scanning of the environment and we get an extraordinary amount of information, not from resolution, but from color.

Laymen coming to an HDR image will swear that the image has greater resolution than a non-HDR image, but what they are responding to is the increased information in HDR's wider color gamut. What the brain perceives as "sharpness" is merely more color information.

Realizing that 4K plus HDR is certainly the next step in production workflows, Sony has released a new 4K OLED reference monitor, the BVM-X300, which supports High Dynamic Range and a variety of formats.

The BVM-X300 is a high performance Trimaster EL monitor that supports High Dynamic Range with a wider color gamut conforming to DCI-P3 and most of the ITU-R BT.2020 standard, as well as S-GAMUT3.cine and S-GAMUT3. This puts the monitor at the front of the pack for color reproduction. The monitor has a diagonal picture size of 750.2 mm (29 5/8in) and a resolution of 4096x2160 pixels with presets for 4K, 2K, UHD and HD and various frame rates.

The Trimaster EL has the advantage of being able to turn individual pixels off completely, allowing for accurate blacks. The monitor's OLED technology allows for a contrast ratio of a million-to-one, over the two thousand to one of LED technology.

The new Sony monitor was demoed for the press at London's Filmlight, creators of the Baselight grading toolkit. Sony product specialist Tom Crocker opened by pointing out that the Rec. 709 color standard, which established the color gamut on which current TV specs are based, was designed to serve a CRT technology that is 60 years old. The newer wide colour gamut standards, DCI P3 and  BT.2020, were going to set the palette for the future.

The BT.2020 standard defines the widest color gamut yet. Sony's Crocker pointed out that the BVM-X300 monitor falls just short of being able to reproduce the entirety of the BT.2020 color space.

"But BT.2020 is a new standard," he continued, "We've had a lot of problems with this, in a lot of areas, in the past few years: a new standard is developed and we all conform with it immediately and then we want to go further and have to conform back again to something that isn't ideal. The point should be that we throw the ball a little farther and it takes a little longer to get up to it. In a few years, we'll see a lot more things fully BT.2020 compliant than there are right now."

New workflows incorporating HDR images (and monitors like the BVM-X300) will create some challenges, especially for traditional broadcasters, but will also open a host of new opportunities.

One benefit to HDR distribution options is that many camera originals contain enough color information that productions can be regraded and redistributed in HDR versions. The Sony F55 and F65, for example, were the first digital cameras that could exceed the color gamut of film. In most productions, it is taken for granted that a certain amount of picture information captured shot isn't going to make it to the screen. With HDR, there is a greater promise of synchronicity between what the crew saw onset and what the viewer sees at home.

"One of our freelancers (using the F55 and F65) who does a lot of storm-chasing was thrilled when he saw this monitor," said Crocker, "He could go back to a lightning storm he shot in Arizona and regrade it and see it as he actually saw it on the day. Until now, he's never been able to reproduce that. For someone who makes a living as he does, selling a lot of stock footage, it's hugely valuable."

New HDR content will be delivered through several different channels, including packaged media. A new Bluray that will be able to deal with HDR content and OTT services like Netflix and Amazon are already well on the way to producing their own HDR content.

Standard broadcast transmission of HDR is a bit more complicated. "There are a few different approaches that are being posited for how this should be done – whether it should be done with some kind of sub-carrier or with some kind of curve that compensates in the TV," observed Crocker. "As far as Sony's concerned, as a manufacturer of creative tools, we're going to implement whatever the standard is that is settled on."