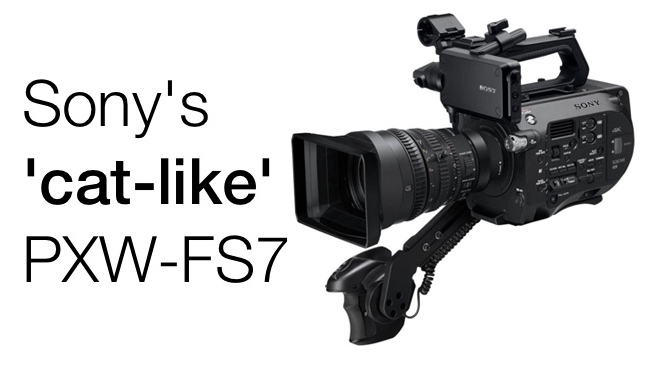 The PXW-FS7 4K: A worthy successor to the Aaton 16mm camera that inspired it?

Barry Braverman hoists the vérité-style Sony PXW-FS7 4K onto his shoulder and, with a few qualifications, finds it an honourable recreation of the spirit of the classic Super 16 documentary cameras.

A proper assessment of any new camera really comes down to just two things: how well it performs and how well does it feel. Of course the performance of most new cameras these days has improved dramatically, with high sensitivity, wide dynamic range, and very low noise. Operational challenges, on the other hand, including ergonomics, continue to be an area of considerable frustration for shooters.

The new Sony PXW-FS7 4K addresses many operational concerns. First, the camera is very well balanced with superb ergonomics. Compare this to the handling nightmare of most DSLRs, which are invariably ill shaped, very front heavy, and replete with a thousand tiny buttons. Some camera manufacturers like RED are taking their time jettisoning the notably user-unfriendly rectangular box, and this is understandable. The uninspired box is cheaper to design and manufacture, compared to Sony’s FS7 whose body may be more expensive to produce but is a joy to hold and caress. Sony says the camera was designed to be minimalist and streamlined for vérité-style shooting, like a cat on the shoulder, that is, mimicking the simple, comfortable, easy operation, of a 16mm Aaton film camera.

The FS7 is very comfortable to handhold, thanks in large part to its new ingeniously designed grip and versatile extension arm.

The hardened battle-scarred documentary shooter can take great solace in the FS7’s robust construction. The magnesium body is structurally and thermally more stable than aluminium and about a third lighter overall. Its magnesium frame contributes to effective heat dissipation, which is especially critical in data-intensive cameras like the FS7 that produce plenty of heat and plenty of noise, if that heat is not properly dissipated. The camera’s heat management system also incorporates large radiating fins and a cooling fan to maintain a reasonable operating temperature and draw damaging heat away from the electronics and sensor. 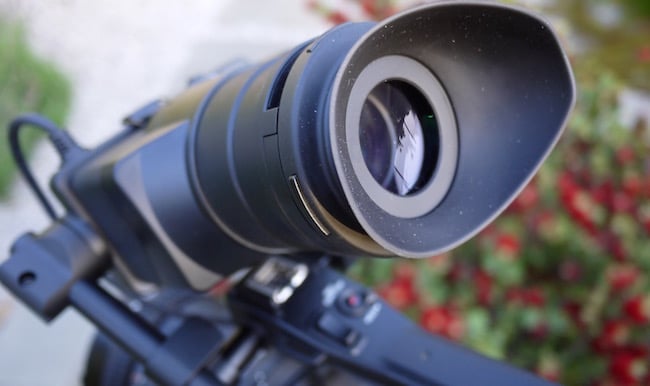 Unlike the F5 the FS7 does not feature a side LCD screen for menu access.  Most shooters will use the camera’s normal VF for that. The FS7 viewfinder is very bright.  For evaluation of exposure by eye shooters may opt for the 709 setting in the VF. This approach seems to work well when shooting RAW or in S-Log.

While the FS7 body is well-protected against dirt and moisture, one area of continuing concern for some shooters is Sony’s proprietary E mount, a markedly less rugged lens mounting system than the de facto industry-standard PL type. However there is a crucial trade-off here worth noting. The E mount is much more versatile than PL, with electronic interconnectivity for metadata support and the tweaking of certain lens parameters and performance via onboard LUTs and software; the mount is also designed advantageously to accommodate a wide range of optics irrespective of format owing to its short 18mm back distance.

Not insignificantly the E mount also allows for a much smoother operating iris in increments of hundredths of a stop. This compares with the more restrictive 1/8-stop increments found in most popular multi-purpose lenses originally designed for still cameras. Pro video shooters utilising Sony’s E type lenses should therefore see a nice benefit, as these lenses eliminate the disconcerting stepping effect often seen when opening and closing the iris mid-scene.

Still, the E mount is not particularly resistant to environmental hazards, and may lack sufficient robustness for some rigorous applications like travel and nature documentaries. These types of assignments typically employing heavy zoom telephoto lenses tend to be particularly rough on gear. Under such conditions rod support is imperative to protect the lens and the E mount’s structural integrity. 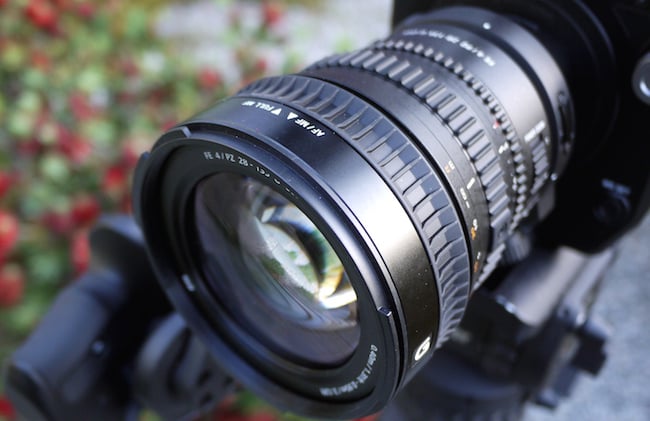 Sony’s economical 28-135mm F4 zoom is a true 4K lens that maintains critical sharpness and contrast to the corners. The E mount zoom is remarkably free of chromatic aberrations – the main reason cheap lenses look cheap. The flimsy lens cap provided by the manufacturer is not in keeping with such a high quality lens.

In low light the FS7 exhibits a practical realistic sensitivity of ISO 2000. The camera’s hypergamma settings 7 and 8 place middle grey at 33 and 40 respectively, and indeed one sees a nice sweet spot at this ISO. FS7 shooters working with collaborators around a set and waveform may want to keep these 18% grey references in mind when evaluating exposure.

The FS7 shares the same sensor as Sony’s F5 and indeed the lesser model offers up images virtually indistinguishable from its higher-priced brethren, in terms of colour, low light response, and dynamic range. The camera’s S-Log settings 2 and 3 seem to yield the best overall latitude and response, especially in the brighter highlights, where the gentle, more film-like roll off, is most apparent. Since the gray and white points are precisely set when utilising S-Log shooters should strive for correct exposure on set. It is then usually fairly simple during grading to adjust the highlights one way or the other and/or tame otherwise noisy shadows and grays.

At ISO 4000 the FS7 exhibits little apparent increase in noise. Recently I used the capability to great advantage when shooting Paris at night, employing available light exclusively for Michael Tinholme’s romantic music video La Mer. This manner of working, utilising ambient exclusively, is becoming increasingly de rigeur for many shooters, and in this respect, the FS7 is leading this trend.

Recording UHD to the onboard XQD card I played the angle and character of the city’s streetlights, placing them behind and slightly to the side of the talent to create an illusion of adequate exposure. With ultra speed lenses I could have taken greater advantage of the camera’s higher frame rates up to 60fps at UHD resolution. The F4 zoom included with the FS7 kit while a remarkable in most ways is also relatively slow, restricting me to capturing images at 24FPS with a 172.5º shutter. 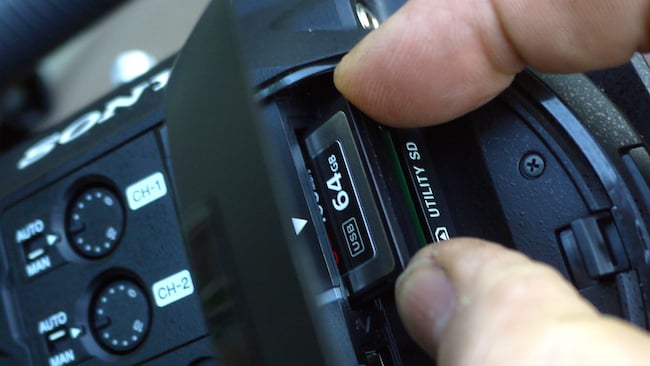 The cramped area around the XQD card slots makes removal of the cards unnecessarily awkward for those of us with Bart Simpson size hands.

The FS7 shares a great deal of technology from the F55, including XAVC recording and many core accessories. Its menu array is similarly deep and inscrutable, a legacy of Sony’s broadcast roots no doubt, and not in keeping in my opinion with the simplicity expected in a vérité-style camera.

The FS7’s array of external buttons should make run-and-gun shooting more efficient but some buttons are too exposed. The S&Q button in particular is easy to inadvertently enable in the heat of battle, resulting in untimely, unexpected, changes in frame rate.

The FS7 also features a built-in utility mic for slating and logging takes. This track may be assigned to one of two stereo channels, or to one of four channels if using the K2M accessory. Double-system shooters will find the logging mic especially useful for capturing scratch audio and synchronizing the picture and sound later in post.

The standard FS7 uses the small consumer-type batteries which are convenient for run-and-gun shooting of docs and low-budget music videos. In such cases shooters should opt for the largest such battery they can find.  An optional rear breakout box supports more professional and practical Gold Mount or V-Lock batteries.  The rear adapter is also required for RAW output.

As filmmakers and cinematographers, we know that a camera is only as good as its optics. While computational photography in devices like the iPhone has obviated the need in many ways for finely crafted optics, the demand for high-performance lenses persists for those of us working at the upper reaches of the film and television industries; indeed, given the rise of 4K resolution cameras our images demand superior optics more than ever.

The FS7’s 28-135mm F4 lens is the first high-performance S35mm-format zoom to be offered at such a breakthrough price of around $2500. In the past OEM kit lenses have been mediocre at best, as name-brand lens makers paste their names on poorly performing optics that serve mainly as placeholders to maintain a kit’s overall low price. Indeed, one of the first things camera buyers did after acquiring their new pride and joy was 1) buy a larger battery to replace the underpowered OEM unit; and 2) spend another $10K or more on a proper well-performing lens.

Integrating sculpted aspheric elements and unique low-dispersion glass the FS7 4K zoom represents a revolution in economical lens technology. Remarkably free of chromatic aberrations the lens compares favourably with much pricier hand-built optics; its relatively slow F4 maximum aperture posing less of a challenge these days for many shooters employing camcorders like the FS7 that shoot virtually noise-free at ISO 2000 and above.

Sony’s sophisticated servo control of zoom and focus enables both a close focus capability and a constant F-stop throughout the zoom range, producing images remarkably free of chromatic aberrations – the main reason cheap lenses look cheap. The downside of all the servo control, however, is a disconcerting operational lag. Unlike mechanical lenses, the FS7 zoom and focus lack a positive tactile response: the noticeable delay is akin to the oversteering we found maddening in many older American cars. It took some getting used to, especially if your daily driver was a BMW.

Verdict: Let's hear it for the cat!

Sony’s intent was admirable: to produce a vérité-style camera that mimicked the easy operation and ergonomics of a Super 16mm film camera. Sony does not quite achieve this level of elegance in the PXW-FS7 4K, but the camcorder’s user-friendly profile - not to mention a remarkable new lens - are serious and bold moves in the right direction. 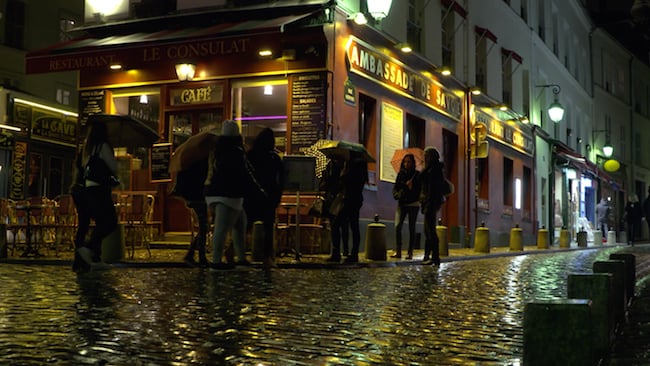 Nighthawks at the Cafe: With a native sensibility of ISO 2000 the Sony PXW-FS7 captures very pleasing noise-free images in city streets at night. Sony cameras have always featured excellent built-in noise reduction, and that’s certainly the case here. While more noise reduction may be applied via a menu option, the effect can be excessive and lead to a noticeable loss of shadow detail.