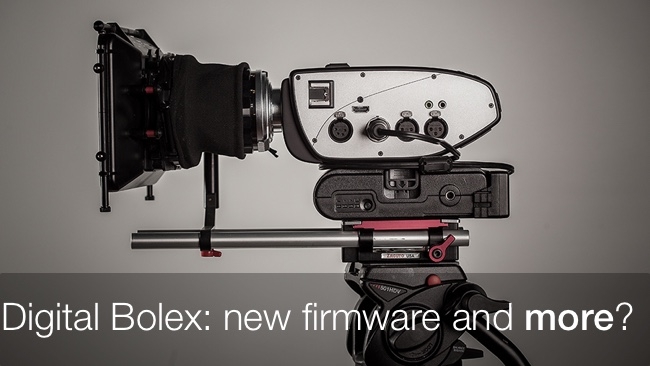 The Digital Bolex team has hinted at some exciting announcements to be made at this year's CineGear 2015. While everyone onboard has remained relatively quiet over details, here's what we know so far...

This morning the latest camera firmware (version 1.3) for the D16 (color and monochrome) was released. This makes version 1.3 their second firmware update this year, and fourth overall since the release of the camera.

Initially announced in April, the new firmware adds a number of new features and demonstrates the largest, most complex overhaul of the D16's firmware.

Digital Bolex has also announced a collaboration with Slamdance to bring a series of films shot on the Bolex to Los Angles's Lansing Theater. The films will be projected to their native 2K resolution, and will be followed by a Q&A.

As part of a New Year's Resolution, Digital Bolex has committed itself to a more cautious approach towards making product announcements.

This leaves room for some exciting, if not completely absurd, speculation on the part of this imaginative author…

C-Mount Zoom, aimed at documentary users: The Kish prime lenses are amazing in both resolution and price. These ƒ4 lenses most serve the highly structured production environment of narrative and commercial worlds. I'd love to see DigiBolex create a product aimed at verité shooters with the same quality, build, and in similar $500-900 price point. You know, an ƒ1.8, 10-75mm, all glass and metal zoom. No big challenge right? (kidding!)

Stand-Alone Audio Recorder: The audio recording features on the D16 are flat out incredible, and the v.1.3 firmware upgrade made it even more amazing. It'd be very cool to see a DigitBolex stand-alone field recorder. Same guts as those in the D16, just without the picture.

D35: There's been plenty of speculation in forums all over the internet about Digital Bolex taking a leap up to 4K with a new camera. Though I'm uncertain about how a 35mm/4K camera would fit into the Digital Bolex branding model, a D35 would put this camera in direct competition with the Alexa.

D16 Pro: The D35 is the product of wild speculation, I would hazard that a more plausible guess might be a “pro” model of the current D16. Similar guts, with extended features, possibly in a shoulder-mount form factor, ideal for documentary and on-the-go shooters.

Digital Bolex Lunar Rover: Forget drones! Digital Bolex is going to take aerial photography to the next level by giving users the opportunity to send their cameras into orbit and beyond.

Something more functional for the their current users: While these other ideas are much more fun and make for better headlines – it's more realistic that Digital Bolex will announce more practical accessories and updates to their current camera line.

As a policy, Digital Bolex has always focused on creating products with long lifespans; cameras that are an investment beyond the next product launch cycle. This respect for its user base has gathered Digital Bolex a healthy following.

Lunar Rover or not, myself and others here at RedShark News are excited to see what Digital Bolex has in store for us at CineGear...