We know what an ideal camera would be like. But why haven't we got one? 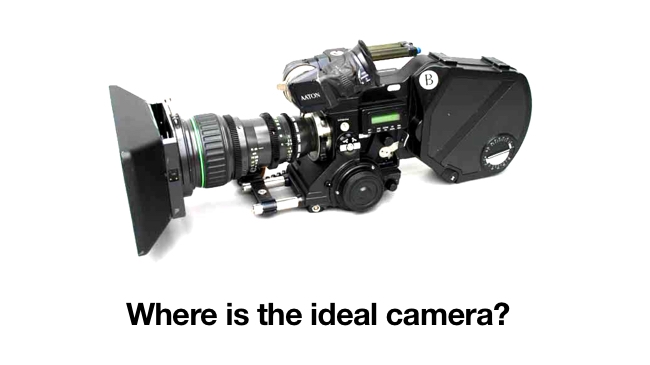 With all the modern technology available, why do we still not have the ideal documentary camera?

A couple of months ago, I wrote a piece about the evolution of the documentary camera which clearly struck a chord with many readers. Since then, there have been nearly as many suggestions of cameras that fit my criteria as the number of new cameras that have appeared on the market.

I argued against the obsession with shallow depth of field that comes with large sensors, a preoccupation which means few manufacturers seem to be taking smaller sensors seriously. Although great for interviews, shallow DoF can be a nightmare for observational documentary. Moreover, large sensors also rule out the wide range, fast, compact zoom lens documentary makers need and, unless you stick to stills camera lenses (which have their own limitations), the lens options make what seemed a very reasonably priced camera not so much of a bargain.

Do sensors for 'serious' work always have to be big? When Barry Ackroyd was rightly praised for his Super 16mm cinematography on 'The Hurt Locker', many celebrated that it was shot on film, but I don't recall anyone saying 'but pity the camera only had a Super 16 gate – shame about the bokeh'.

The Sony FS7 and the AJA CION for instance, both excellent cameras in there own way, one proven, one just arriving to the mass market, but both have 35mm size sensors and my argument was for a smaller Micro4/3 or Super 16 size gate. The BlackMagic URSA Mini looks like a fantastic value and also has been designed to sit on the shoulder but this, again, has a Super 35 sensor.

Another interesting camera is the forthcoming JVC GY-LS300 (don't Japanese manufacturers love catchy titles?) which has a combination of a Super 35 sensor and a Micro 4/3 mount with 'variable scan mapping' which enables you to chose between MFT, Super 35 and Super 16 lenses. In principle, this sounds great, but once again we see a hand-held rather than shoulder-mount design with a viewfinder stuck on the back of the camera rather than the side. This is also the case with the new 'entry level' Sony HXR-NX100 with its Super 16 size sensor (and it also, apparently, comes in separate 24/30/60p and 25/50p versions; you can't shoot worldwide formats on the same camera; a crazy restriction in a multiformat era).

A matter of design

Video camera design is still is remarkably conservative. A digital video camera is basically a lens, a mount and a sensor behind it – and a mass of electronics. It could be almost any shape you want, yet the ergonomics still seem to echo film camera design of half a century ago. Why? A camera based on a skeletal frame, sculpted to fit the shoulder, could have the lens at one end and the electronics balancing at the other, with a monitor or viewfinder just wherever you wanted it to be.

When I cited the Aaton XTR as being the peak of documentary camera design, someone, quite reasonably said something to the effect of 'yeah, but how much did that cost?' A fair question and the answer in today's prices would, I guess, be something like twice the cost of an Arri Amira. Historically speaking, the prices of professional cameras today are extraordinarily cheap. Twenty years ago, a BetaSP camera and basic accessories would have been in the range of £25k to £30k (that was the price tag without adjusting for inflation). But those prices must be seen in their historical context. For many years, there was a notion of a 'standard kit' (first 16mm, then BetaSP – when things went digital, diversity set in) that producers would budget for and which would remain standard for many years. It was common to lease a camera over three years and be reasonably assured of not only getting your money back but making a profit. Now, of course, cameras change so rapidly there is little notion of a 'standard kit' that could last you for five years or longer. Generally, the industry is also much less stable; many would prefer to buy a low cost camera outright then to rent what they need.

These are extraordinary times for a cameras. An inexpensive camera, like a DSLR, can compete, in terms of image quality, with a professional camera costing ten to twenty times more. The downside of this is, of course, there is pressure to force equipment budgets down; because you can get great pictures out of a low-cost camera then that is what you 'should' use. Yet as I've suggested before, the disadvantages of the DSLR are not so much with actual image quality, but with everything else.

See: The evolution of the documentary camera has gone very wrong