You can't assume that cameras will get faster every year 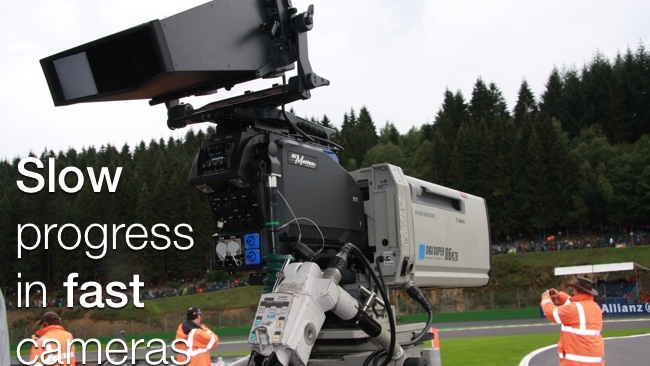 We have become so used to technological progress with mainstream video cameras being dizzyingly relentless that it’s almost a shock to come across a field where the dominant models are two years old and, as yet, there are no new ones on the horizon.

The field in question is the highly specialised world of ultra slo-mo — the cameras used mainly in sporting coverage that provide images at 400fps and above — and it provides a fascinating insight into the differing drivers of progress and change across the industry.

There are several reasons for the comparative slow pace of development in ultra slo mo compared to the mainstream.

Firstly, it’s a small, specialised market with only a handful of manufacturers servicing it and demand constrained by the number of sporting events that can be broadcast in any given day worldwide. NAC’s Hi-Motion II, one of the market leaders in the field, for instance, has sold around 100 units worldwide in three years. The fact that this is a sustainable business model tells you a lot about how expensive this type of camera tends to be.

Second, it’s all about being fit for purpose. Any equipment used for live sports broadcasting wants primarily to meet the specification for the Rio Olympics in 2016. Once that level has been achieved — and OBS will be broadcasting the games in HD — everything else would be gilding the lily and superfluous.

Thirdly, 4K has proved to be a huge problem for ultra slo mo. It can be done, but the large format sensors that have been used to date have led to a bit of a backwards step in live broadcast image quality at least (Vision Research’s Flex 4K is primarily aimed at movies and commercials with post production acting as a quality backstop, while PL-mount is a further ocmplication). Two-thirds inch sensors capable of driving ultra slo mo equipment are what will be required by the industry, but as yet they don’t exist, not even in tradeshow whisper suites.

What’s interesting is that nor, such is the dominance of the Olympics, is there an urgent hurry to build them. Estimations are that the next generation of 4K-capable ultra slo-mo cameras will probably appear in 2017, when the whole cycle of upgrading the industry ahead of the 2020 Olympics (and a presumed 4K world feed) can start.

The specialists will need that speed bump again by then too, as the mainstream is catching up: the Sony HDC-4300 being one of the newer breed of 4k cameras that can also capture HD at up to 8x slo-mo given the application of the right license. And while it lacks the finesse and control of the specialist units, it makes up for it by doubling as a conventional camera and minimising seat kill at venues.

But it shows that small, dedicated teams can keep ahead of the might of an entire industry if their specialism is niche enough. And it also shows that constant progress and the relentless application of the white heat of technology is not always the right thing for every market.