The DSLR revolution is finally over 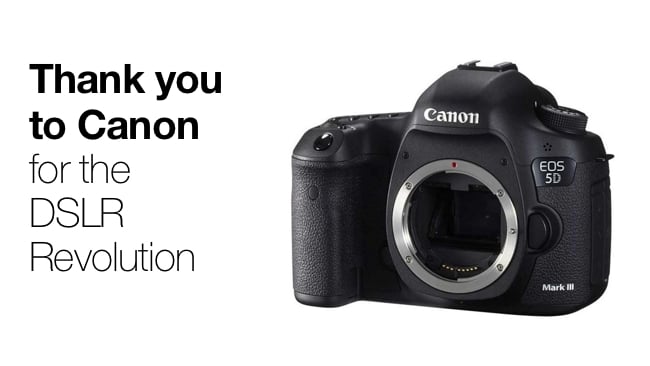 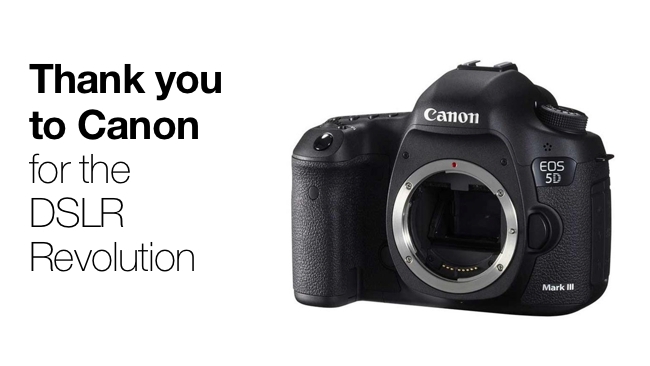 DSLRs kicked off the large-sensor video revolution. Will anyone be using them in a few years time?

We’re not going to make a big deal of this but it does seem like there’s a big change that’s happening right now. In fact it might well have happened already.

DSLRs are no longer setting the pace in the field of low-budget cinematic video. The DSLR revolution has run its course and paved the way to today’s landscape, of which more in a minute.

There’s absolutely no need to recap the DSLR video revolution in detail. If you’ve been reading RedShark or any of the other more specifically-themed DSLR websites over the last couple of years you’ll have noticed the rise and demise of DSLR video. And like all revolutions, not everyone realises it’s over. But here's our brief take on it.

DSLR video was an unintended consequence

Ironically, the clearest indications that the DSLR era is now to be referred to in the past tense come from Canon. And who can blame them. In a sense, for them, DSLR video was always an unintended consequence. What started as a minor feature to help news journalists became the feature that facilitated a mass movement. All of a sudden, anyone who needed to make a decent-looking film with cinema-like qualities, could. The technology was affordable and accessible.

But there were limits: technical and commercial ones. Technically, aliasing and overall softness meant that the images didn’t stand up to critical scrutiny, although they were quite outstanding compared to what was available on such low budgets before. The form factor was an issue too, although in true Darwinian fashion, all sorts or rigs and adaptors appeared, in what because essentially a new industry.

But commercially and politically, DSLR video cut across more traditional "video" products for Canon, and at the start they didn’t have any large sensor cameras for that cinematic look.

Right in the middle of the revolution, Canon released their Cinema EOS series: a large-sensor camera range without the typical disadvantages of DSLRs - because they had video-specific sensors are were totally geared towards making cinematic footage - with improved ergonomics as well.

They were very good, too. The only real reservation about them was that they used rather uncinematic 8-bit codecs, which,with the exception of the C500 when it was used with an external recorder, placed a ceiling on the type of production they could be used for. Most of these reservations have and will be fixed with the new generation of EOS C Cameras, as the mark II versions are rolled out.

They cost a lot more than DSLRs though, so they didn’t stop the revolution in its tracks.

Something else did that. In fact two things.

First, large sensor video cameras like the Blackmagic Cinema cameras came along at similar affordable prices with very film-like footage and - this was a bit of a holy grail - raw video, which meant that it was possible to capture a significantly higher dynamic range. The Pocket Cinema Camera from Blackmagic Design was the device that proved that price needn’t be a reason for not buying a dedicated video camera. Interestingly, it was the camera most similar in form factor to a DSLR.

Secondly, along came mirrorless cameras. It’s hard to categorise these in that they are by definition not DSLRs, but they do share much of the form factor with them. So they have ergonomic downsides, but their performance is absolutely stellar. The Panasonic GH4 is a solid 4K performer, and while the Sony A7S can’t record 4K internally (but can send it to be recorded externally) it absolutely excels in low light, while giving very credible performance in good light.

Meanwhile some, but not all, the major manufacturers - including Canon, of course - have dedicated 4K video cameras that are affordable to a greater or lesser extent. And even the ones which might be out of reach now become more accessible to small production companies and freelancers whose growing reputation allows them to buy newer and better gear as their careers progress (we see this all the time with RedShark readers).

Where Canon goes next is not clear. I think they will continue to make video-capable DSLRs because it’s simply too useful for them not to do so. One of my favourite ever cameras is the Canon 1DC, which is perfect for me: I take more stills than video, but when I want video I want it to be good and to look at its best straight out of the camera.

When the canon 5D MK IV comes out, I personally doubt that video will be its primary design driver. After all, the size of the market for still cameras is somewhere between ten and thirty (possibly even more depending on how you define it) times the size of the video market. Video is just not a priority in this sector. It’s still possible that we’ll see a MK IV C - a version of the new staple with a significant tilt towards professional video, but if I had to bet, I’d say that was unlikely.

Meanwhile, the DSLR video revolution leaves us all in better shape. We can  make video more cheaply, we can use RAW if we want to (thanks to the cheaper non-DSLR cinematic cameras) and we have a very well populated product pathway right up to the top-end rigs that they use in Hollywood.

Thanks, Canon. You’ve changed the world for us.