Opinion: Ursa Mini and a lens that needs to be made 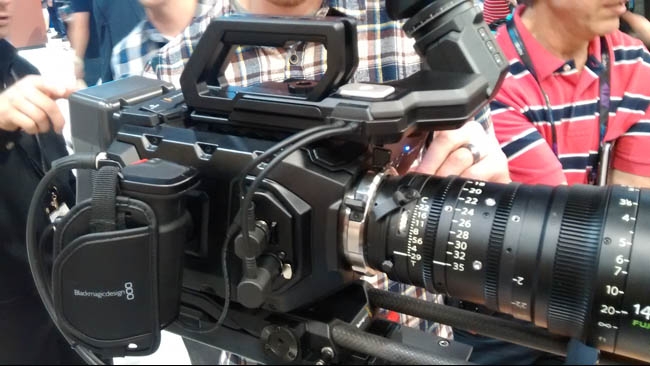 A lens for the Ursa Mini

Blackmagic's introduction of the Ursa Mini camera again calls into question why a certain lens does not exist.

This is, in part, a story about Blackmagic's recently-updated camera range, but it's more to do with handheld camera operating and a lens that doesn't exist.

Let's consider the status quo. "Good grief," we cried, when Blackmagic released the Ursa, "it weighs as much as a sturdy infant wildebeest." Although that criticism may be fair, such concerns need to be viewed in the context of the manufacturer's intent. In making the original Ursa, the company created something that addresses many common concerns regarding build quality, sturdiness and the ergonomic issues of balance and inertia. Since then, it has been consistent in presenting the camera as a crew-served device, designed to be surrounded by a full camera department and operated as such, however realistic that is in reality. Ursa is not (and was never intended to be) an ENG camera, much as many people use them in that fashion quite effectively.

What we might gather from this response to Ursa and the tendency to approach it as an excessively-sturdy news-gathering device, is a reaction to a gap in the market. Other manufacturers (with the exception of JVC) have consistently avoided releasing ENG-styled cameras at prices accessible to people moving up, perhaps, from DSLRs. Canon, particularly, is upfront about its caution in this regard, given its need to maintain cordial relations with Sony, manufacturer of the ENG cameras on which huge numbers of Canon's lenses are used. Even at this level, no good comes from competing with one's best customers.

Blackmagic, of course, suffers no such scruples and, as such, was free to develop both the Ursa and its diminutive new sibling. Headline prices for the Ursa Mini don't include the mounting plate, top handle or viewfinder, which between them add perhaps US$2000 to the price, but given those things, the new camera looks like the one of the best options in years. There are a few concerns: though it seems churlish to complain that the lightweight version of a rather heavy camera is too small, the mini Ursa is actually a bit too mini (or at least doesn't slide backward far enough on its shoulder mount). Even a moderately bulky lens would make it front heavy and I can foresee many users rigging a battery plate backwards, regardless of the existence of a built-in plate on the back of the camera itself. Another regret, complicating this ambition, is that the mounting plate does not provide rearward-facing 15mm rod mounts, although this is more or less the only oversight in an otherwise very good set-up. The quick-release receivers, compatible with the ubiquitous Sony VCT-14U-style quick release plate, are sturdily constructed from either cast or machined metal, as opposed to the flimsier punched sheet parts found on even high-end broadcast cameras.

The sleeper hit of the new set-up, though, is the viewfinder. We've mentioned before that Blackmagic's viewfinder may actually be the first full-resolution HD viewfinder available, although it's since become clear Panasonic's EVF for the new Varicam is another example. At US$1500 or so, we should not expect the very best electronic viewfinder ever built and, to be fair, it isn't. The optical set-up creates an apparent image size that could be bigger, which makes the high resolution OLED less useful than it could have been. Nonetheless, those interested in applying the Blackmagic viewfinder to other cameras can do so, thanks to its standard BNC and XLR connectors for signal and power, respectively. The Ursa Mini does have its flip-out TFT (which won't rotate to achieve Selfie Mode, which may actually be a good thing) with the usual rather nice Blackmagic-style menus, although at present those can't be viewed in the viewfinder and manipulated with push buttons, which would be great to have in bright conditions. In general, though, Blackmagic's viewfinder is a very nice development.

The pictures, naturally, are something we'll have to form an opinion about at a later date, as the greatest interest will almost certainly be in the much-vaunted new 4.6K, wide-dynamic-range sensor. 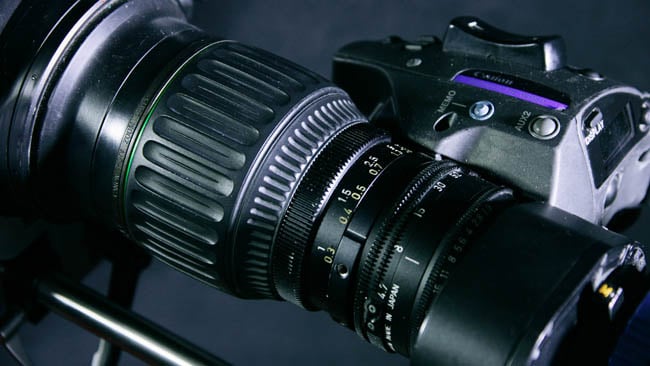 However, the discussion this does raise is key to this and other mid-range cameras: the conundrum of glass. NAB after NAB goes by without a solution to this problem and discussion with two lens manufacturers (Fujinon and Canon) reveals that both are keenly aware of the gaping gap in the market for a lightweight zoom lens suitable for single-chip cameras. On the face of it, this is something that's somewhat more straightforward to build than it would be for broadcast cameras. Both companies responded positively to a fantasy lens specification describing something suitable: an ENG-style, fully mechanical zoom, which doesn't have to have the lightning-fast f1.3 transmission of normal ENG zooms, nor does it need a complex retrofocal design to achieve a single-digit wide end, nor does it have to have a doubler, nor does it have to handle three-chip cameras. The servo grip probably doesn't even need to have an iris servo, although zoom is always nice. The numbers arrived at during informal discussion were something like a 10x18mm (that is, 18 to 180mm) zoom, to provide a reasonable wide end on a super35 sensor, at f2.8 throughout (which seems fast but is the best part of two stops slower than most ENG zooms).

You could use LANC

There is a concern over the best approach for the electronics. Most ENG lenses can have the servo zoom made active with nothing more than an appropriately-wired 12V power supply. Given that the buttons on most of them are simply wired to pins of the Hirose connector, there wouldn't be a need to alter anything. A more complete implementation might offer a LANC host to service the control provisions of an increasing number of current cameras and recorders. LANC is a serial device control protocol originally developed decades ago on Sony devices, which approximates the coding used by their remote controls. Manufacturers including Atomos and Blackmagic have adopted it for basic device control, although (in theory) anything could be controlled by it, such as the menu system on an Ursa. While this is a refinement and the concept of the lens itself is more important, the idea of finding a four-way directional pad and a LANC jack on the back of an ENG-style lens intended for these sorts of cameras is an attractive one.

Theoretically, lenses broadly satisfying this sort of specification already exist. Fujinon's Cabrio series, particularly the 19-90, Canon's CN range, and even some lenses from Angenieux, do fill roughly this sort of need. But they're a completely impractical match with an Ursa or AJA Cion from a financial point of view, and the run-and-gun documentary market is one where notice is frequently so short as to make rental impractical. From a technical perspective of optical design, this proposal is probably more like a stills lens than it is any of the existing broadcast range and Canon, in particular, seemed receptive to the idea of basing it around the lens elements of an existing stills zoom. To achieve a price point of ten thousand US dollars or under (ideally keeping it around the same price as a fully rigged 4.6K Ursa Mini), a manufacturer would have to avoid cutting brand new glass. What's important to realise is that this would not need to be the best, sharpest, highest-contrast lens ever released under the Fujinon or Canon brands. It needs to be affordable, fully and properly mechanical, and to work straightforwardly with single-chip super35 cameras. That's all. Getting the shot with a touch of corner softness beats not getting it at all.

Such a lens would be sensibly applicable to any of the Canon C series, its APS-sized DSLRs and, depending on the design approach, potentially all of the full-frame ones as well (a 'speed booster' in this circumstance is functionally equivalent to the doubler in conventional ENG zooms, trading minimum achievable focal length off against light transmission). It would match nicely with Panasonic's GH series, the AJA Cion and practically every camera ever made by Blackmagic. One could, dare I say it, even put one on an Amira, if one were after something reasonably lightweight, and JVC's new GY-LS300 would be a good match, too. The LS300 deserves particularly honourable mention here for having variable sensor windowing to facilitate compatibility with various types of lens, although the proposed design ought to cover the sensor completely.

We can be confident that is within the capabilities of a company like Canon to construct such a lens at the desired price point. The experience of shooting from the shoulder with the sort of servo-actuated stills lenses (or the ancient mechanical stills glass that are typically used on cameras at this price range) is utterly revolting. The market is potentially huge. I would hope that another NAB will not go by without news of a solution.