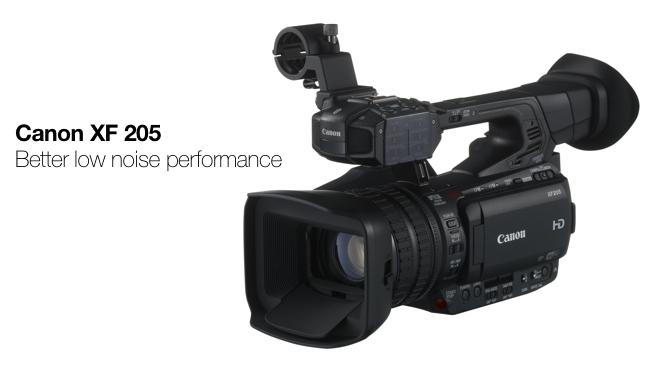 There's some new firmware for the popular Canon XF 205. The headline improvement with this release is better low light performance; immensely useful for the target audience, which is typically wedding and event videographers.

Now, it isn't normally possible to change the laws of physics with a firmware upgrade. You have to work with what you're given and use it cleverly.

So what Canon has done is (reading between the lines slightly) reduce the absolute resolution of the image in return for better noise performance. This is a trade off that is probably acceptable where the choice is between getting a usable shot or not.

It also demonstrates that Canon is willing to listen to its users and make changes where necessary. Maybe this is a sign that we're living in an ultra-competitive word, where every little edge counts.

The first firmware update, available now, will enable a new image-quality setting, allowing users to record footage with reduced noise, even in low-light conditions. The new update gives operators the freedom to choose their preferred image quality based on their shooting requirements. Users can select from the current default setting, which prioritises the camera’s high-resolution shooting, or the new setting, which gives priority to capturing video footage with reduced noise.

An additional firmware update, available from late June 2015, will enable the XF205 to steam video footage over IP networks, a practice widely used by the broadcasting industry. By enabling this feature, users will be able to transfer live footage to news programmes and video-sharing websites.

Additionally, the new firmware will allow the XF205 to work with Fujitsu’s video transmission equipment – the Fujitsu Network IP-900IID and IP-920D HD/SD Compact Video Decoders – as well as software supporting IP streaming. With this new feature, users will be able to stream video over an IP network without having to alter existing video-capture and editing workflows, such as those employed at broadcasting stations.

Firstly, when recording in MP4 format, videographers will be able to use slow and fast motion recording – slowing down action up to 40 percent, or speed up video by up to 250 percent.

Additionally, when choosing Wi-Fi settings on the XF205, the selection menu will feature an improved user interface, delivering intuitive and easy to understand operability.