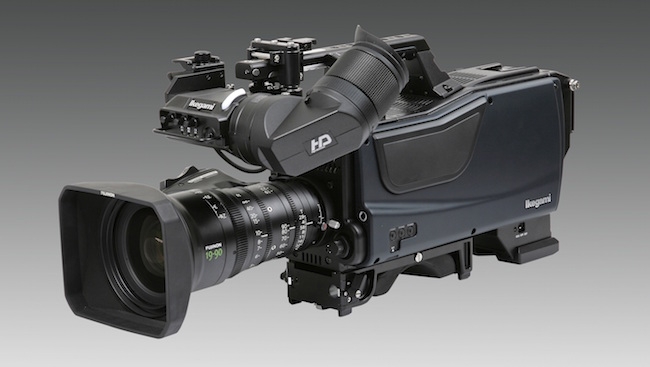 Ikegami is another manufacturer working with NHK on developing Super Hi-Vision camera kit, and with its latest shoulder-mounted SHK-810 it is also highlighting the astonishing amount of progress made since it manufactured its first 8K prototype back in 2002.

It seems the technology behind making 8K cameras has finally become viable this year with yet another 8K camera announcement coming to the party. We have seen 8K prototype cameras and technology demonstrations a number of times over the years but until now they were huge unwieldy affairs which made people gasp just at the sight of the technology involved. Such prototype cameras were more ready to mount on a fork lift truck than a tripod or pedestal but this year all that has all changed.

Hot on the heels of Hitachi's 8K camera, Ikegami is also showing what is now its fourth generation 8K camera, the SHK-810, a tenth of the size and weight of the original 8K unit the company made way back in 2002. Of course that camera was the weight of a fairly hefty refrigerator. The new camera is a much more usable 9kg (although this is still a fair bit heavier than the original Blackmagic Ursa which weighs only 7.40kg in comparison).

The layout and appearance of the camera is very familiar to those who have used Ikegami studio cameras from decades ago, so in theory past Ikegami users should feel right at home. In fact Ikegami is keen to point out that 8K camera development has now reached a point where it can be operated at the same level as the current broadcast camera systems.

There are, however, a few changes from the traditional broadcast camera setup. It's a single chip camera with a Super 35mm sensor, so B3/B4 lenses are out and operators will have to get used to the shallower depth of field. To be honest I suspect it's going to be a very difficult task to make a workable 2/3" camera with 8K resolution because of the optical physics involved. Diffraction can be a problem at 4K with smaller sensors, let alone 8K.

The new camera uses a standard ARRI PL style lens mount as is more common in the world of cinema style production and it seems Ikegami expects this to become the standard mount for Super Hi Vision cameras as it is talking about specially made SHV Zoom lenses being available in PL mount. There is a built-in back focus adjustment. The camera has a single CMOS sensor with 33 million pixels which apparently delivers 4000 TV Lines of horizontal and vertical resolution.

Ikegami states that: "The colour filter on the sensor is matched with the dual-green SHV colour arrangement, and achieves a high level of modulation depth.” As it's a single sensor camera and not using the dual-green quad sensor arrangement that was developed for the first 8K cameras, I assume this means that the pattern on the sensor provides two green pixels for every red and blue pixel.