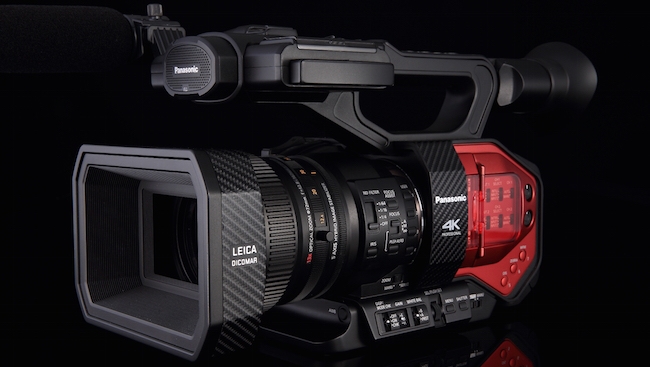 Eye-catching: the DVX200 will be released this autumn

In light of the legendary AG-DVX100, Panasonic’s announcement that it will continue its legacy with the launch of the new 4K DVX200 was one of the early highlights from this year’s show.

The DVX200 sports a 4/3 inch CMOS sensor capable of 4k resolution up to 60 frames per second. Appearing to be geared towards journalists, news, and documentary work, the DVX200 will feature a 13x optical zoom in a fixed, servo ENG style lens. The glass itself is a Leica Dicomar f2.8-F4.5 zoom with a range between 29.5mm to 384.9mm in 4K mode. This will ensure for maximum coverage in an ever changing environment.

Like the Varicam 35, Panasonic has optimised the DVX200’s colour science to share similar characteristics in tonality and colour rendering. A welcome feature to the DVX is also the V-Log profile which will allow for 12 stops of dynamic range. This latitude for a journalistic style camera should provide a robust option in the editing room to adjust your highlights and shadows.

The camera will offer such resolutions as true 4K DCI at 24p, and UHD at the respectable ranges of 60p, 50p, 30p, 25p, and 24p. The DVX will allow you to capture your image in two flavours MP4 or MOV. The camera also supports dual SD card slots to ensure backup and roll over recording. It is unclear if the unit will offer 8-bit or 10 bit compression, but it will allow for a clean 4K output via the SDI and HDMI connectors.

While traditional in its form, the DVX200 has a stylish carbon fibre overlay along with a bold crimson red chassis on the back end of the unit. The camera screams for attention with a striking profile and hopefully a stunning image to match. News crews and documentarians rejoice, the DVX200 might just be the 4K unit you have been looking for.

Delivering a shallow depth of field and a wide field of view, the DVX200 is the ideal companion camera to the company’s groundbreaking VariCam 35 4K camera/recorder. With an integrated lens design, the DVX200 will excel in independent film and documentary production, as well as event videography.

The DVX200 will be optimized for 4K/HD production, and shares the esteemed VariCam family characteristics of filmic tonality and colorimetry, with natural, subtle rendering of skin flesh tones, and a V-Log curve emulating the natural grey-scale rendition of the VariCam 35. The camcorder will incorporate a newly-developed 4/3” large-format MOS sensor and offer variable frame rate recording up to 120fps in FHD mode, enhancing the DVX200’s utility in sports and VFX production.

The new Leica Dicomar 4K zoom lens with F2.8 aperture is an optimal choice for 4K video, with the ability to produce elegant imagery and subtle “bokeh” Also, Leica’s exacting quality standards serve to suppress the occurrence of ghosting and flare to a minimum. Since the DVX200 is an integrated-lens camcorder, there is no need to perform the flange back adjustments or shading corrections when changing lenses. Even with a large diameter lens, the DVX200’s weight and balance have been optimized to facilitate agile, mobile 4K acquisition. With superb center-of-gravity balance, the camcorder will be ideal for such flexible shooting applications as mounting on today’s popular stabilized camera rigs.

The AG-DVX200 utilizes a front element lens / filter diameter of 72mm, a very common size. It is expected that many third party lens accessory manufacturers will announce items such as close-up lenses and other desired options.

The AG-DVX200 will feature next-generation ergonomics, with the battery positioned in the rear so as not to interfere during handheld shooting. The DVX200 comes with a rugged woven carbon,fiber-like finish, and the recording section is distinctively styled with crimson shading.