Cameras are great! It's everything else that needs improving now 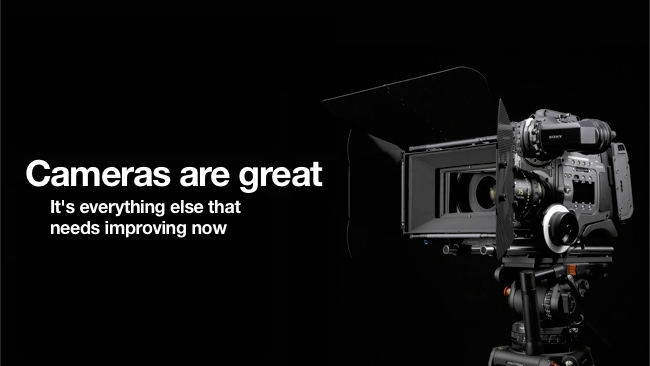 An accelerated evolution and a highly competitive market has helped ensure that cameras themselves are excellent now, but what about everything else? Phil Rhodes, RedShark's Technical Editor, gives his views ahead of the start of NAB.

The best thing about this article is that I wrote it about two hours before the news of the new Canon cameras went public – and I don't really feel the need to change anything. There will quite probably be several new camera releases at NAB. There will be glossy brochures and booths on the show floor that look like the villain's lair from a Marvel movie. There will be spectacular release events with enormous video screens showing nicely-produced showreels, with smartly suited executives shifting awkwardly in front of them. Thousands of people will attend (and many of them will gather in one spot and chant about Go Pro). It will be spectacular. It always is, and as a result, people will describe newly-announced equipment as game-changing, epoch-making, and earth-shattering.

And in six weeks time, no games will have been changed, epochs made, nor planets torn asunder. Now, don't get me wrong; improvements in the equipment available to camerapeople and related trades, at every possible level, have been genuinely spectacular in the last ten years. The perhaps slightly questionable technologies first proposed as a replacement to 35mm film, which were incredibly expensive at the point of release, have since been exceeded massively by cameras costing little more than a basic used car. We live, if anything, in a post-scarcity society as regards camera gear.

In some ways, of course, this creates a rather uncomfortable situation. Problematic video footage is now more difficult than ever to lay at any door other than that of the person who shot it. There are always practicalities, of course: lighting, in particular, has not really become much cheaper, the emergence of LED notwithstanding because decent LED lighting isn't very cheap. Grip equipment may be slightly lighter-built, but the skills to put a camera in the right place, move it around as necessary, and keep everything in focus remain with the human crew, who are still by far the most expensive resource on a film set.

But that's really reiterating the obvious. What's important is that improvements in cameras are highlighting the lack of similar progress in other fields. Lenses, in particular, are becoming a huge issue. I had the significant pleasure recently of shooting on a Blackmagic Production Camera with Nikon stills primes, and the fact that this represented a better-than-average experience is a worrying indication of how low the average has become. I take nothing away from Nikon's lens people when I say that no stills lens is really built, with the best will in the world, for film and TV work, but the mere fact of having a manual iris and focus ring, connected directly to the pieces of glass as opposed to via the electronics and servoactuators of many current designs, was a boon. Despite the easy availability of comparatively great cameras, there are still many other avenues down which equipment improvements might run.

Specific predictions are always dangerous, although some things are already known. The chronically under-recognised people at Fraunhofer are expected to be showing a more production-ready version of their lightfield array, which allows dynamic the extraction of stereoscopic 3D, stabilisation, and refocusing, with variable depth of field, after the fact. JVC showed their new 4K camera at BVE in London, and NAB is likely to be a more general public outing for it. It's hardly controversial to predict that Blackmagic will announce a raft of new products, but it'd be particularly nice to discover that they'd built a 4K version of the HDLink SDI to HDMI converter with inbuilt LUT capabilities. Things like this are all too often obscured by the fireworks of a camera or major software release, but this is something for which there is a pressing need and alternatives, such as those from Fuji, are expensive.

Finally, yes, we're going to see even more remotely-operated aerial vehicles. It's perhaps a bit of a leap to describe this as a genuinely new development, as people have been using suitably upscale radio-controlled helicopters as camera platforms for years, but the advent of satellite positioning and the affordable availability of microprocessors fast enough to effectively fly the machine automatically through a shot has made it more practical than ever before. The regulatory response to this technology is also of keen interest as the rules are to some extent still in flux in various jurisdictions, and until the sheer quantity of remotely-piloted flying stabilises, it'll be difficult to work out what's a reasonable expectation and what isn't.

So yes, there will be cameras at NAB. There will also be lenses, lighting and grip, and those things are of at least equal importance. One can reasonably hope that we see more global-shutter cameras emerging, and 4K cameras with ever improving noise performance and dynamic range. It's not as if cameras have nowhere to go. But I'd also like to see more affordable HD zoom lenses, with at least APS coverage, in the ENG form factor, and a sharp reduction in the price of LED lighting that doesn't make everyone look fractionally unwell.

We'll find out how realistic these desires really are in the next week or so. Naturally, the prospect of shiny new equipment is enticing, and anything that genuinely opens up new horizons, or at least drastically alters the price point of certain capabilities, is of keen interest. Regardless of what's on offer or what its capabilities are, however, it's as well to keep at least a portion of our attention aside, for the perhaps more prosaic, but equally crucial, parts of the business.