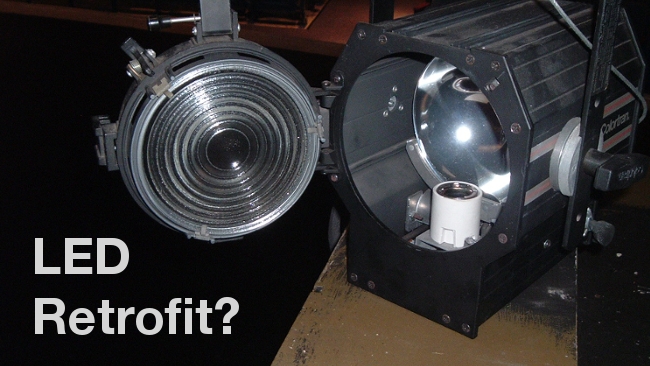 A new product might hold the key to LED output matching that of 1k tungesten lights and could pave the way for a retrofitting trend.

Given the ferocious rate of change in LED lighting at the moment, it's almost inevitable that this piece will be out of date almost as soon as it hits the internet, but here goes, anyway. Belgian manufacturer AVL (for Audio Visual Lighting) is offering a device that's intended to plug into a G22 socket (the two pin lamp base often used for one-kilowatt tungsten bulbs) which employs LEDs, presumably a cluster of many, to purportedly create output equivalent to the 1kW bulb it replaces.

On one hand, this would seem like the holy grail; a straightforward like-for-like LED replacement for tungsten would sell like particularly tasty hot cakes if it was as simple as that. These types of bulbs are used almost universally in theatre, film and television, and in some of the most prototypical lighting devices around – basic tungsten fresnels and the like. Whether the situation actually is as simple as that is dependent on a few things. First, a thousand watts of tungsten, assuming an only slightly cautious four-to-one efficiency benefit for LED, equates to about 250W of LED, 200W, if you're feeling generous. This is a lot of LED, given current technology, and would require highly effective forced-air cooling. It's no surprise to discover that AVL's device does have a fan mounted on the back which looks to be about the same size as that used on computer CPUs, which generally dissipate anything from many tens to maybe a hundred watts of energy. Whether that's enough to cool a couple of hundred watts' worth of LEDs is one key factor.

The other issue is that the AVL device, quite reasonably, is considerably larger than the G22 tungsten bulb it replaces. The LED emitting area is of roughly the same dimensions, but there's a reflector and heat sink assembly (as there must be), which makes things a lot bigger. Given that most tungsten lamps involve a metal reflector that would become irrelevant with AVL's LED device, it's not impossible to imagine that many housings designed for G22 tungsten (or even similarly-sized metal halide) might be able to accommodate the AVL LED.

Advantages, other than the well-known luminous efficacy bonuses attributable to more-or-less all LEDs, include dimmability without colour shift and a more advantageous emitting area, which should allow fresnel optics to create a more pleasing beam shame. All of this is based on the company's literature, it must be remembered, but it's entirely reasonable given the optical realities of the situation. That an LED should offer improved lifetime and physical robustness goes without saying, although the effectiveness of that cooling solution will be crucially important to maintaining usable lifetime, especially if brand new LEDs are to colour match adequately with those which have run several thousand hours. Few LEDs made to date, with the exception of things like Arri's L series, with active optical feedback control, can realistically be expected to achieve absolute long term precision, although the better cooled types should have fewer problems.

As ever, there will be concerns over colour rendering. The LED is chip-on-board, rather than a remote phosphor type and therefore probably produces a white light of a similar quality to everyone else who're using this sort of arrangement, which includes a lot of major manufacturers. Otherwise, though, the advent of easy drop-in replacements for tungsten lighting is something we should all be welcoming with open arms. With any luck, we'll be able to look at one of these in person soon and answer some of those questions about fit, cooling and colour.