Sony PXW-X200 - For some, this is the ideal type of camera 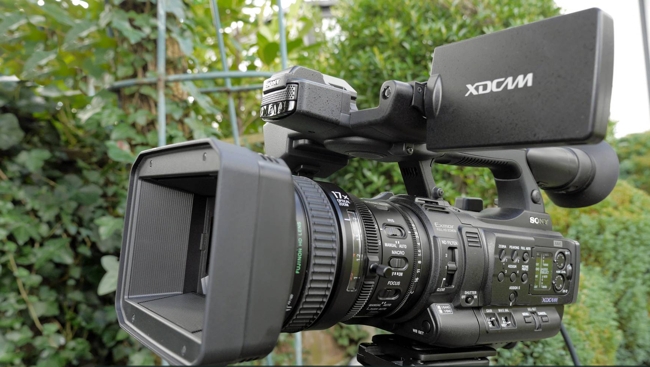 Camcorders have evolved to be the shape and form they are for very good reasons. It's worth reminding ourselves about them!

It may be tempting to dismiss "conventional" camcorders as past their sell-by date. In the last few years we've had the camera equivalent of the "Cambrian Explosion" in the shape, style and form-factor of video cameras, leaving, some would say, conventional camcorders sidelined by their more "modern" cousins.

But there's another, probably more accurate, view, which is that traditional camcorders are the way they are for very good reasons, and that those reasons are more valid than they have ever been.

On the face of it, the PXW-X200 doesn't break through any barriers. It's not even 4K. But that almost doesn't matter, because the point of this new device is not to set any records, but to be the sort of camera that will get the shot for you reliably, and there are solid technical reasons for that.

First, the PXW-X200 doesn't have interchangeable lenses, and in may ways, that's a good thing. It's good because it comes with a very capable built-in lens with a huge (17 times) zoom ratio. At its most basic, this means that you don't have to mess around changing lenses. In a hostile environment, you'll be grateful for that! But just because you can't swap lenses doesn't mean that you have to put up with inferior optics. Far from it. Because dedicated camcorders are able to digitally correct for focus and distortion, and the reason they're able to do that is because they know about the lens! With an interchangeable system, most of the time the camera knows nothing at all about the lens, so is unable to compensate for any irregularities.

And then there's the fact that this type of camcorder doesn't have a single large sensor. Which at the very least means that your pictures are more likely to be in focus more of the time. Don't forget that with three separate sensors, each has its full resolution dedicated to each of the primary colours - there's no de-Bayering process because there's no bayer filter.

Let's address the lack of 4K. Honestly, how many clients (I say "clients" because this is not a camera for making cinema films) are asking for 4K? And if any of those do ask for it, how many can actually view it? Ironically, with a camera like the PXW-X200 your pictures are more likely to be in focus, on average, than with a large-sensor interchangeable lens camera. More often than not, a deep depth of field can get the shot, where a more cinematic set-up would miss it. There's a very good reason why you need a good focus puller if you're making a cinema film. Remember, you only have to be around half a pixel out of focus for 4K to look like 2K.

Finally, I've spoken to a lot of camera operators recently who love the "look" of cinematic camera setups. But what they don't like so much is the way that every time the assemble their system it's like solving a three dimensional jigsaw.

It all boils down to this: if you're making cinema films, then you need to plan it down to the very last detail. This takes time, and time is money. If you're making almost anything else (a documentary, a corporate training video or shooting for a news broadcast) then a "traditional" type camcorder is probably going to do a better job for you.

And we haven't even mentioned workflow yet. Traditional camcorders tend to have codecs like MPEG-2, which virtually guarantees them compatibility with all the major editing software. The PXW-X200 also has XAVC, which is becoming widely accepted and brings with it higher quality for a given bitrate.

We asked Mark McCarthy of Sparky Film Ltd to try the PXW-X200. Here's his video