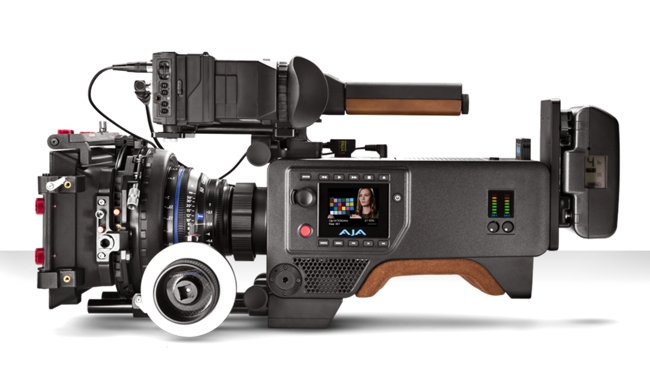 Following on from his initial first impressions, Peter J Haas spends a week with the AJA CION and finds a solid, well-built workhorse of a unit that produces some amazing images with rich and vibrant colour reproduction - straight out of the camera.

As I previously discussed in my first impressions article, I was highly impressed with the CION's ergonomics and options for customisation. After a few days shooting on location it's clear that AJA's first camera offers fantastic cinematic images.

The CION records various iterations of the popular Apple ProRes format (up to 444) in DCI 4K (4096x2160), UltraHD (3840x2160), 2K (2048x1080), and Full HD (1920x1080) to proprietary AJA solid state magazines called AJA Paks. When recording to these mags the CION will record up to 60fps, depending on the format. With the addition of an external recording unit, the CION can capture a customized AJA flavor of an uncompressed, lossless raw and additional frame rates up to 120 fps.

Four outputs for monitoring (two SDI and two via HDMI) allow for the simultaneous connection of an external electric view finder and a preview monitor. A set of each of these connections are located on the top front of the assistant side and rear of the camera, allowing for flexibility when it comes to your video tap. Also located on the top front is a 2-pin power connector, very handy for powering your EVF or monitor. In addition to monitoring the CION has four 3G-SDI outputs for 4K, UltraHD or four 1080 streams, two XLR audio inputs and a LTC jack.

The CION is incredibly well built and balanced. I particularly liked the simplicity of the settings / menu controls and the fact that all my major functions were accessible through a single row of buttons and a click-wheel. This means no endless lists of menus inside other menus to change ASA, file naming, frame rates or formats. It took only a few minutes of tinkering before I got a solid feel for the location of all my primary settings, (I could have accelerated this process if I had looked at the manual first, but where's the fun in that?) and not long after that it became second nature. 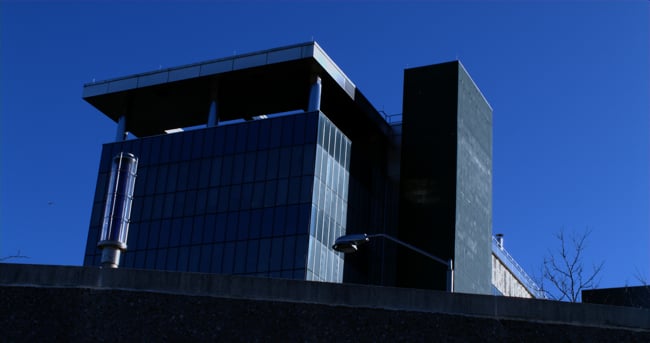 The choice of utilizing an APS-C sized sensor feels like an appropriate choice for a cinema camera, as it aligns the CION with traditional super 35mm film cameras. Making the sensor historically compatible is important for a few reasons.

When it comes to lenses you're going to have a wider selection of glass to choose from, including the PL cinema lens many DoPs and operators are both familiar and comfortable with. Many other cinema cameras on the market default to DSLR mounts, and these still photography lens are simply different than those traditionally used on motion picture cameras. With DSLR lenses so prevalent in shooting these days, it was a pleasant, comfortable experience working with cinema lenses again. 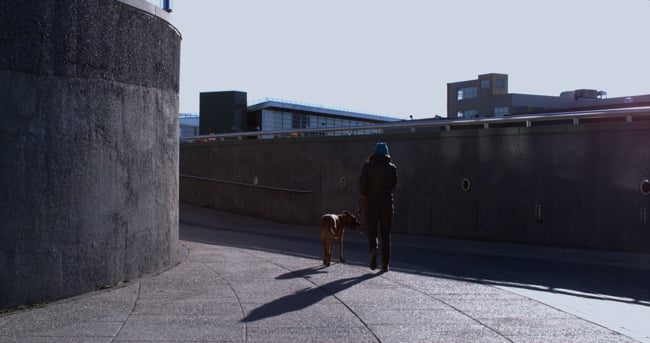 That being said, AJA's lens mount is removable, allowing you to easily add a variety of alternative lens mounts, expanding your options further: Canon EF (which a number of shoots have invested a significant amount of money in), Nikon as well as Arri Bayonent and others.

I've seen some interesting CP and C-mount adaptors, which if you're willing to do some cropping could produce some very unique images (anyone who watched our test short Peter Pan Bakery knows I enjoy options for creative lens choices!).

In a similar vein, I felt comfortable with the depth of field. Under normal conditions of lighting for lower apertures, I never felt the sting of having only a millimeter of focus available, yet never felt as though I wanted for a pleasing out-of-focus background.

AJA elected to make use of a global shutter, so you won't be haunted by the limitations of the dreaded “jello-vision,” which I can't thank them enough for. I know this sort of pixel-bending-distortion has become common place, but I find rolling shutter artifacts to be a sickly blemish on cinematography. With the CION I felt comfortable making rapid movements such as quick pans or in camera whip-around transitions.

The images coming out of the CION are extremely pleasing and cinematic right out of the gate without the need for extensive processing in post production. The CION currently doesn't utilize any “log” color space recording modes, which means that what you're looking at through the EVF while shooting is representative of the image your shooting. AJA does include the option to shoot in a “flat” mode but you probably won't find yourself needing it. The lack of a true log mode didn't bother me, in fact there's a valid and logical argument against shooting everything in a flat or log mode which I tend to agree with. Since a majority of shooters will be recording in ProRes 444, there is still going to be plenty of latitude for color timing in post production. 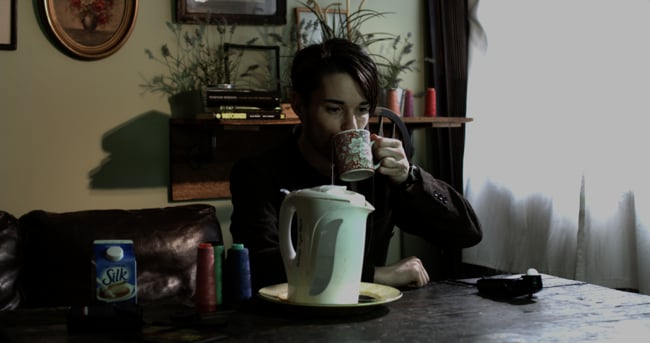 Here's a good example of how this image holds up under extreme conditions.  The image is set to an ASA 320, shutter 180°.   The window in the background clicks in at slightly over a ƒ64, and darker areas screen left is right around an ƒ2.  This was intentional by design: utilizing a window with no ND (we did soften it by closing the drapes), a basic 320w soft fill, this panel also added a nice pop to my eyes for the closeup.  A 500w backlight is sitting in the back of the room, which you can see if you look at the raw images, you can see the highlights on both my hair and shoulders.

Depending on what format you're shooting in, you have a variety of choices when it comes to your film speed, with the lowest sensitivity being 320 and the highest being 1000. These are typical speeds, again with an parallel in the celluloid film world. I found all the image pleasing at all the exposure indexes. The grain structure that begins to become visible above ASA 500 is very organic in nature and feels more akin to film grain than video noise. In some instances I enjoyed pushing the exposure index to take advantage of the grain for aesthetic effect. All this being said, the CION is not a point-and-shoot in the way that many DSLR users are familiar with, and it's important for people who are considering this camera to recognize the distinctions.

Not having done any precision tests I would probably place the dynamic range of this camera in the 10 to 12 stop range. This is based on my experience shooting outdoors with heavy splits between areas of direct sunlight and shadows. I was very pleased with how the camera captured both highlights and shadows. Highlight roll off was organic and smooth, and the brightest areas never seemed to burn out in a displeasing way. The shadows are thick, silky with subtle detail and pleasing texture.

Brighter colors such as reds, yellows, sky blues, and oranges felt vivid while still maintaining a clean look. Our office kitchen setup has a number of dusty colored objects, off-yellow/white plates, the red flower textured tea cups, which maintained their subtleties without appearing washed out. You can see similar nuanced renditions at work in the metallic grays, rusty browns, and reds in the skylines we shot at the Newtown Creek. Blues and greens are brilliant, thick and rich.

A great example of this can be seen in the shot of the CITI building: You have wonderful graduations of light blues in the sky, a tall, green-blue glass building with both highlights and shadows, and darker deep blue-grays of the creek. Overall, the palette produced by the CION is incredibly pleasing, which produces lush, well textured colors with fantastic gradations. 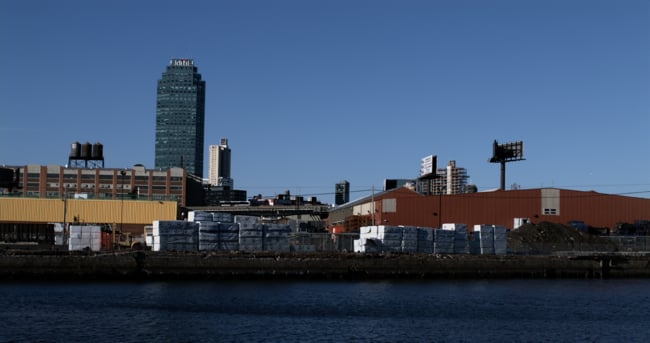 After a week of use, it's obvious to me that the CION is a solid, workhorse of a camera: it's well built and produces amazing images. I've mentioned this before in other reviews, but I'll say it again: as both a filmmaker and cinematographer, I look for that special “something” in an image. For me, there is something wonderful about the convergence of 2K/4K resolution cameras using the surface area of “film gauge” sensors – images are crisp and detailed, with motion that seems to flow correctly. Combined with attention to the aesthetics of rich, vibrant color reproduction can really hit the sweet spot in terms of that elusive magic best described as “cinematic mojo.” In the case of the CION, AJA totally nails it.