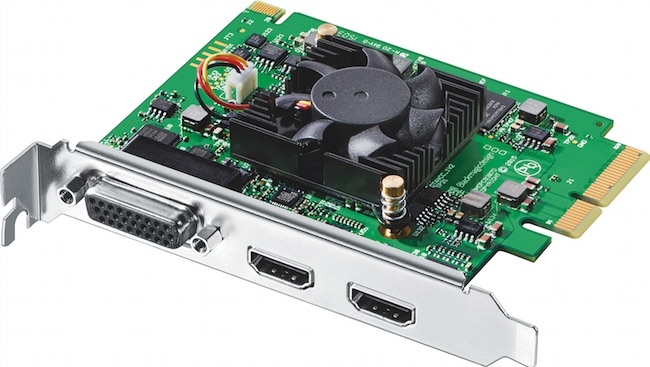 Thinking about a 4K monitor? Blackmagic Design has upped the spec of its broadcast standard consumer video capture and playback PCIe card to encompass Ultra HD up to 2160p30 via HDMI.

Coming in at a mere $199, the Intensity Pro 4K is firmly aimed at the consumer end of the market though it also ships with enough grunt and features to interest the pros as well. As well as HDMI connectors it features analogue YUV, S-Video, and NTSC/PAL connections, meaning that it will work with pretty much anything from old VHS decks and DVD players up to the latest generation Ultra HD kit.

Additions include Deep Color support, higher frame rate 1080p60 capture of HD material, and that headline high resolution Ultra HD capture and playback up to 2160p30 via HDMI. Files can be saved with or without compression and, judging by the skew of the marketing materials on the Blackmagic website that accompany the release, its target markets include everything from video editors wanting a realtime preview on big screen consumer kit, gamers capturing high frame rate walkthroughs, people looking to digitise their old VHS tapes, and even anyone looking to bypass internal camcorder compression and stream uncompressed onto the web.

Read the full release over the page.

Intensity Pro 4K is available now from Blackmagic Design resellers worldwide for US$199.

The new Intensity Pro 4K is the only consumer video capture and playback card that’s built using the same broadcast quality video components that professionals in the film and television industry use. That means customers will always get the highest quality video capture possible. It features both HDMI and analog YUV, composite and S-video connections so it is compatible with the latest Ultra HD televisions and game consoles, as well as older equipment like VHS decks and DVD players.

Customers can capture NTSC, PAL, 720HD, 1080HD and Ultra HD, the newest broadcast video standard. Regular 1080HD can be captured at up to 60 frames per second. That means gamers can connect their consoles over HDMI and then capture every heart pounding moment of gameplay to create the most amazing, high frame rate walk through videos for posting online.

Video can be captured at full 10-bit quality and files can be saved in standard formats such as ProRes (Mac) and more, or as fully uncompressed video, the format used by professional television production studios. Files captured with Intensity Pro 4K can also be used with other popular Mac and Windows applications like Final Cut Pro X, Premiere Pro, Vegas Pro, Media Composer, Fusion, After Effects, Flash and many more.