We now know what the future of DSLR video will be 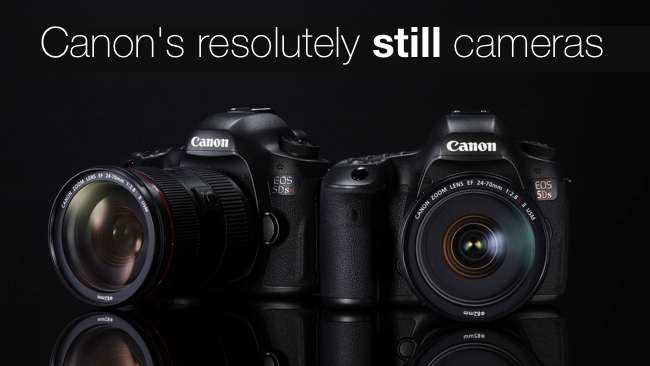 Canon has just announced two new members to the EOS 5D family: The 5DS and the 5DS R. But what does this tell us about Canon's attitude to DSLR video?

Well, we knew that they were going to release two new cameras today (Friday, 6th Feb). And they are pretty much expected - with impressively large pixel counts (50.6 Megapixels - far in excess of 8K resolution)

There is a wealth of information available on Canon's site and in their press releases, but for now, suffice to say that these are cameras that are very firmly aimed at still photographers with video explicitly relegated to, if not an afterthought, a lower priority than features for still photographers.

The difference between the two cameras is essentially that one, the 5Ds has a low-pass filter and is therefore suitable for any photographic application, and the other, the 5Dr is for landscape photographers and those who are able to process raw files to remove antialiasing and moire in post - and who most likely won't come up against the problem in the first place because there are fewer straight lines and regular patterns in nature.

(I think it's excellent that Canon has provided this choice).

There's no doubt that Canon is moving into Medium Format territory here, albeit with a DSLR-sized sensor.  In a sense, this is a new class of photography altogether.

But what about video?

Well, there's no 4K, even though the new cameras have in excess of an 8K sensor.

But having said that, let's deal with one thing here straight away. Just having a sensor that's capable of 8K or more doesn't mean that it's capable of video at that resolution. It's one thing to capture several still frames per second from a very high resolution sensor, but quite another to do it smoothly, without interruption, and store it safely, as video.

Not to mention the processing that would be required. Sony has recently made a point of capturing video from its sensors at the full resolution of the imaging device, and that's improved their pictures, but that's a choice they've made.

I think what we're seeing here is Canon's choice. Here's what I mean by that.

The big DSLR revolution started by the 5D MK II was probably never meant to happen. I've seen various versions of the story but essentially it seems that Canon build an ability to capture HD video into their famous DSLR as an aid to professionals who might need to capture the occasional video shot in the midst of their still photography work. What nobody accounted for was that filmmakers would absolutely love the cinematic look of a large sensor and the shallow depth of field associated with it.

Suddenly, in the midst of movie cameras costing hundreds of thousands of dollars, there was a DSLR that could make similar-looking pictures for a tiny fraction of that.

It wasn't perfect, but it was easily good enough to spark a film-making frenzy and - while sales are always good to have - to give Canon a marketing headache: how would they distinguish between their fully capable dedicated video camera range and their video-enabled DSLRs?

Well, we're all a bit older now. Sufficiently so to take a view on this, which I think is exactly what Canon has done as well.

They appear to have decided to back away from video on DSLRs. The new cameras actually have a diminished video capability compared to the Canon 5D Mk III. Yes, that's right. Here's what they say on their CPN information network:

"The EOS 5DS and EOS 5DS R shoot video in similar way to the EOS 5D Mark III, however the design priority of these cameras was to produce the highest possible stills resolution, therefore some video functions were sacrificed. Both cameras retain some of the video features found first in the 5D Mark III for users who want to shoot video to accompany their still images."

In my view none of this is surprising.

I want to tell you about something I noticed in September, when I went to the (large) IBC show in Amsterdam, a show dedicated to broadcasters and content makers, and then the very next day to the (much larger) PhotoKina show in Cologne, Germany.

This suggests to me that the still camera market is very, very much bigger for Canon than the video market. Someone told be (I have no idea if this is true) that it was as much as thirty times bigger.

Even if it was only twice the size it would explain Canon's attitude to DSLR video.

Meanwhile, two thirds of Canon's Cinema range, the C300 and the C500 is up for renewal.

So, here's a prima facie explanation for why Canon appears to be backing away from DSLR video. But there are other reasons too.

You must have noticed that there have been a few new video cameras released in the last year or so? Cameras that are pitched precisely in the direction of DSLR filmmakers? They come in all shapes and sizes. There's Blackmagic's Cinema Cameras, including the Pocket Cinema Camera, there's Sony's A7S and Panasonic's GH4, and a whole slew of more conventionally-shaped camcorders.

Either way, a DSLR is no longer necessarily the first choice for up-coming film makers.

And nor is it for Canon users either. The Canon EOS Cinema range is still gaining loyal users for its picture quality and improved ergonomics over the DSLR form factor.

And this is where, I think, Canon sees the commercial future for cost-conscious film makers.

The original EOS Cinema camera, the C300 is due for an update, as is its 4K-capable sibling, the C500.

No-one would describe the current versions of these cameras as cheap, but they have attracted a loyal following and no criticism that I'm aware of about their image quality. While the replacement for the original C100 didn't tilt the earth on its axis, it did move the genre forward, but I think we will see bigger innovations in the two senior models in the range.

The only remaining anomaly in the Canon stable is the 1Dc (I freely admit that this is one of my favourite cameras, as a still photographer who also makes video) which has recently seen a dramatic $4,000 price drop.  Well, who knows what's going to replace it eventually, but it now sits as an ideal purchase for what must still be a sizeable body of filmmakers who have acclimatised to the DSLR video culture.

They've played to their strengths

So that's it. Two great new cameras in the "EOS 5x" family. Incredibly detailed sensors. Absolutely the cameras to buy if you're a still photographer.

And if you want to make videos? There's never been a better choice of dedicated tools for you.

I know not everyone will agree with me here but I think Canon has done a good job. They've played to their strengths. They want to do what they know they do well. They don't like unintended consequences.

And they probably understand their buying audience better than anyone.

Footnote: To cover all possible bases: we could be completely wrong here. An alternative analysis is that now that Canon has created a "family" of EOS 5Ds, perhaps they're going to release one with dedicated video features as well - kind-of like Sony did with the A7S. Maybe to replace the 1D C? This could happen, but if I had to bet, I would say at this point it seems unlikely, largely because of the expense of developing either a dedicated sensor, or because they'd need a different type of image processor. We'll find out soon enough.