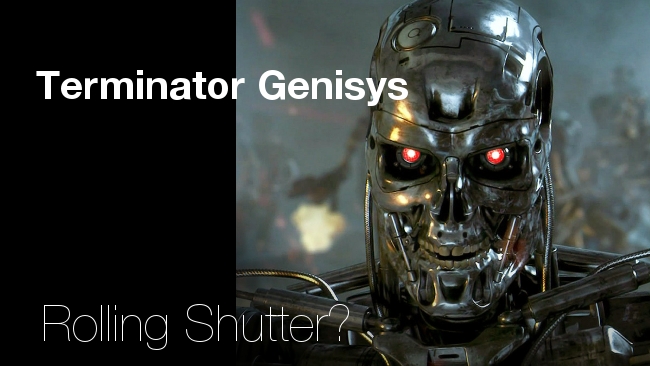 Can we please stop using rolling-shutter cameras for action movies?

We've talked about this before, but the existence of semi-visible muzzle flashes in the recently-hyped trailer for Terminator Genisys coincides with a few conversations I've had recently which imply that quite a few people still don't quite get what's going on here.

Most people are aware of the core phenomena behind rolling-shutter cameras – the exposure doesn't end at the same time for all of the pixels on the sensor. This leads to skewed verticals, for instance, during sharp pans or strange vertical compression effects during fast tilts. Software has been written which attempts to fix the problem and, in some circumstances, can work well, but some kinds of motion can defeat even the cleverest algorithms. Even more problematically, if there's a large, sudden change in brightness level during the period the sensor is reading out pixels, we get flash banding, as here: 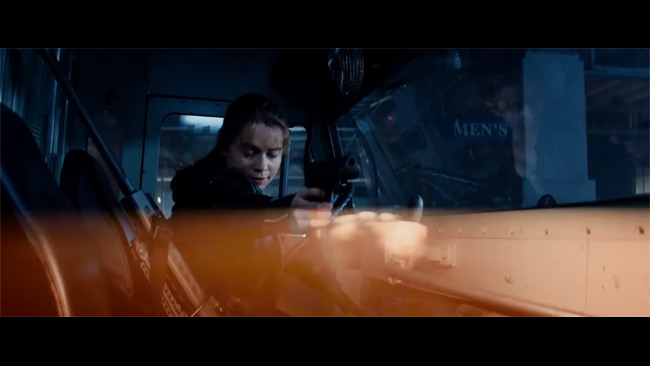 Here we see the lovely Emilia Clarke, she of "dragons" fame in Game of Thrones, firing the sturdy Desert Eagle, beloved of zombie- and robot-slaying motion picture protagonists everywhere. You've probably already noticed the reason for my facetious tone, in that we can, in fact, only partially see Emilia doing this, because the Alexa XT with which the scene was (according to IMDB) shot happened to be in the middle of reading out a frame when she pulled the trigger. Yes, the Alexa is a rolling-shutter camera, despite its otherwise stellar reputation, although it's not very rolling shutter. To be completely fair, on a film of that scale, they could have chosen to work with the mechanical-shutter version which could have mitigated the problem. But not to worry, we get the other half of the flash a moment later, when she fires another round. Sort of. 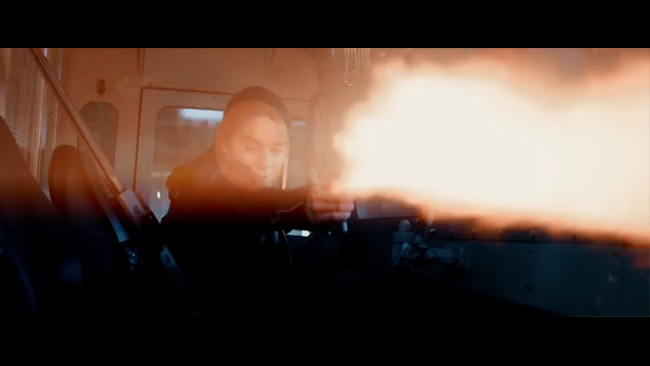 In order that this article doesn't turn into a fully-fitted, wall-to-wall, shag-pile festival of whining, let's at least relate the problem to some misinformation that's doing the rounds at the moment. To avoid this problem, the flash doesn't actually have to exist for the entirety of the one-twenty-fourth of a second (that is, forty-one and two thirds milliseconds) that the Alexa was exposing frame. The period of time during which the virtual electronic shutter is actually rolling across the frame – the period during which the sensor is going through each row of pixels and reading its luminance value – is much, much shorter than that.

Synchronised strobe lights (and gunfire) can avoid flash banding by limiting themselves to switching on or off during any part of the frame's exposure period other than the readout period. The shorter the readout period is, the less visible skew becomes, and the less likely flash banding is, so the engineers who built Alexa have worked hard to minimise it. If the light source hadn't appeared or disappeared during the readout period, everything would have been fine. The fact that it did was unlucky.

This is important to realise if we want to build synchronised flash devices, but maintain the effects of things like xenon strobes. The staccato look of motion occurring under xenon strobe lights (whether that's as part of a live light show or on film in a scene with, say, police vehicles) is partly because xenon strobe flashes are extremely brief, leading to a lack of motion blur and the same sort of motion rendering we see in the opening scenes of Saving Private Ryan. If we build synchronised strobes, possibly using LEDs, and assume that they must illuminate the entire frame period in order to avoid flash banding, something, albeit subtle, of the characteristics of traditional strobe lights will be lost. Let's not make those sorts of mistakes; let's not allow our keenness to avoid the problems of one technology to cost us in other areas.

Postproduction solutions are sketchy at best. While skew and wobble can to some extent be corrected as geometry errors, this is a lighting error and a correct solution requires information about the fall of light in the scene, which isn't in the original photography. The flame can be completed and lens flare added, but fixing the semi-visible fall of orange light on the background is tricky at best.

In all honesty, the crew of Genisys were probably unlucky to have an Alexa give them this, especially twice in a row, especially in a shot that then ends up prominently in a trailer. I've met people who have shot scenes on Alexas involving gangs of paparazzi firing camera flashes and not seen objectionable banding. What's more, there aren't really electronic solutions to the particular example we're looking at here. A firearm is a mechanical device, and there is no easy way to synchronise its operation with a camera shutter. If one were forced to use a rolling-shutter camera, one might choose instead to use plastic prop guns and synchronise a strobe to the trigger pull action, adding the flame in postproduction, which would rob the scene of some of the verisimilitude of a very violent explosive event taking place, but might at least ensure visible gunfire (and it might make it easier for the cast not to blink). Even hardcore real-ale movies like Fury have recently used postproduction muzzle flash, albeit without any backup from real lighting effects.

It's a bit of a stretch, though, to think that Terminator Genisys was really forced to use a rolling-shutter camera if they didn't want to.