Some readers may remember a piece RedSharkNews published in 2013 detailing the camera rig I built up from parts collected from all over the world. In keeping with this theme, I recently purchased an Atomos Ninja Star portable ProRes recorder to give my three year-old Sony HD ‘hybrid’ a new lease of life.

Whilst I have been very pleased with the native AVCHD video recordings at 50P, the bitrate of 28Mbps is fairly low by today’s standards. Consequently, the lightweight battery operated ‘Star’ recorder allows direct ProRes recordings from HDMI to CFast cards at 10bit resolution with HD bitrates of up to around 185Mbps. A number of popular frame rates are supported, in both progressive and interlaced, up to but not including 50/60P. 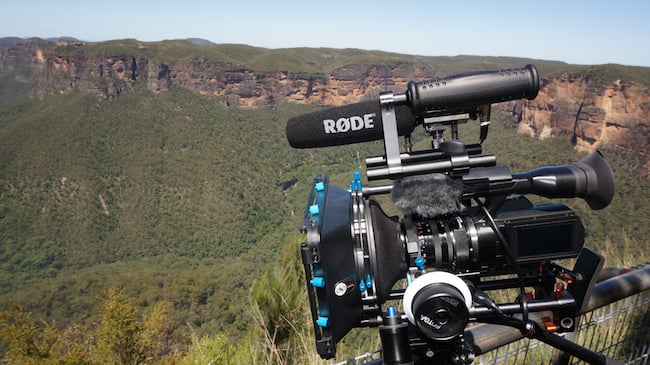 The Ninja Star can be easily connected to any camera with a ‘clean’ HDMI output and as my Sony NEX VG20 was one of the first lightweight HD video cameras with a Super 35 or APS-C sized sensor and a clean 8bit 4:2:2 HDMI signal, I was keen to test out the Star’s capabilities. Perhaps the Ninja Star’s most endearing feature is its minuscule size and low weight, even with the battery fitted. A 3.5mm ‘line’ level audio input is provided with LED metering and this can be manually selected over the usual stereo HDMI audio pass-through. Although the VG20 records stereo or 5.1 surround sound internally, I also use a Rode NTG-3 shotgun microphone to capture specific sounds. As this mic needs phantom power, I’ve modified an I-Rig preamp with correct plug for the Ninja Star’s 3.5mm audio input. The Preamp’s 9 volt battery also supplies the necessary 48v DC to run the NTG-3’s phantom circuit and it accepts a balanced XLR input but outputs a ‘line’ level signal. So for only $49, the I-Rig preamp provides three great audio solutions for the Ninja Star owner.

Video I/O is provided by two micro HDMI sockets and whilst these miniature ‘consumer’ connections have been criticised in the past, especially on some BMD cameras, Atomos have gone to a great deal of trouble to make them as secure as possible and have recently released a series of bespoke HDMI adapter cables with a right angle connection designed especially for the Star recorder body.

Locked out by HDMI 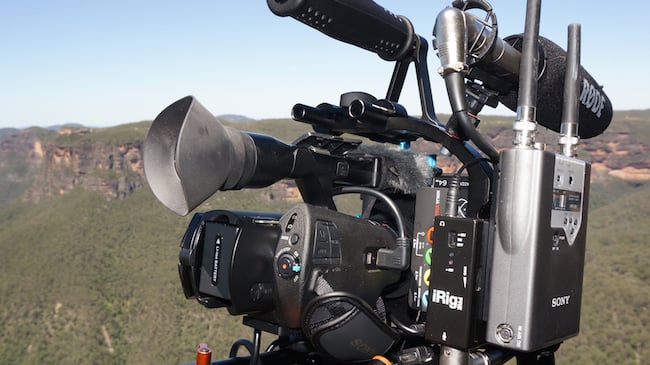 When my Star arrived a few weeks ago, I was initially unable to get a video lock from my camera’s HDMI output. That is, the Star’s red ‘lock’ LED would not turn green in confirmation. Although I tried every possible combination of HDMI settings, the problem turned out to be my generic HDMI to micro HDMI cable adapter which would successfully ‘play’ out from the Star to a monitor but it would not ‘record’. Research indicates that some micro HDMI plugs are wired differently so I do recommend potential customers purchase a genuine Atomos cable to suit their particular camera’s HDMI socket, if only to configure initial settings.

Whilst I discuss settings, the Star can record internally to the ProRes codec at three bitrates; LT, 422 and HQ, each with corresponding recording times reduced as you go up the quality spectrum. The Ninja Star also records at 10bit so cameras like the GH4 which output HD via HDMI at 10bit 4:2:2 can take full advantage of the additional colour resolution. Even with an 8bit camera and contrary to popular opinion, transcoding to or recording to a 10bit codec can preserve potential picture quality throughout the post production chain. Of course, the major advantage of using an external ProRes recorder is to bypass your camera’s internal compression. As I wrote earlier, my VG20 records compressed 8bit 4:2:0 AVCHD internally at up to 28Mbps compared with the Star recording uncompressed 8bit 4:2:2 to ProRes HQ at 185Mbps so with that massive bitrate difference, you could expect a remarkable picture improvement? Well, this is open to discussion. Much of my work is landscape photography and video where the apparent difference is only marginal but the additional 4:2:2 colour space of the Apple 10bit codec certainly holds up better where some intensive grading is employed. 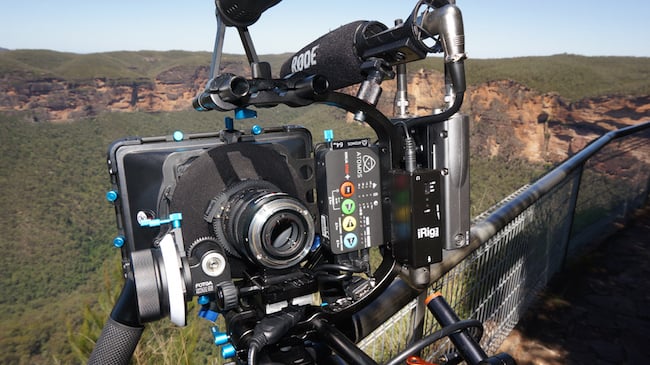 The Ninja Star does not include a video monitor like most other Atomos recorders so its minimal size and weight was the appeal to me but even so, I saw promotional pictures everywhere of these devices perched atop a camera’s hot-shoe. Well, there’s a recipe for disaster! For me, protection of camera and accessories is paramount because I regularly need to carry my heavy rig into remote locations with a backpack on and a tripod slung over my shoulder. Consequently, I decided to fit the Star to my rig’s ‘C handle’ but as the VG20 does not output timecode, I needed some way to start and stop the external Recorder along with the camera whilst the rig was up on my shoulder. After several re-configurations with the included ‘cheese plate’, I succeeded in fixing the Star so that I could simply trigger it with my little finger at the same time as starting the camera with my thumb. I also managed to configure all my occasional accessories onto the C handle so that the camera head supports no additional weight at all and simply ‘bayonets’ on or off in seconds.

Mating glass to the camera

I have a large collection of Carl Zeiss ‘Contax’ traditional full frame prime SLR lenses so I use Metabones' wonderful C/Y to NEX ‘Speed Booster’ to mate my traditional ‘film’ glass to a digital camera and in the process, returning the full frame lens’ original Field of View to the APS-C sensor. After I had my initial video ‘lock’ problem sorted, I purchased two 100mm long ‘micro’ to ‘normal’ HDMI cables and fixed these to the Ninja Star on one end and permanently to the C handle on the other. The huge advantage of this arrangement is that you only plug your accessories into the ‘remote’ HDMI sockets, never into the actual body of the Star itself so this can prevent potential recording glitches as there’s no chance of bending, breaking or straining the Star’s micro HDMI ports.

Occasionally, I do some ‘crane’ shots out in the bush so I place the camera head with a fixed wide angle lens on a telescopic carbon fibre arm mounted on my fluid tripod. The arm extends up to three metres in length so I simply run a short HDMI cable down the crane to the Ninja Star recorder still on the C handle but clamped to the crane. Add a small LED field monitor, a 7AH 12 volt SLA battery and the entire package acts as a convenient counterweight to the remote camera yet I can still record external ProRes. This ‘crane’ scenario is the only time in thirty years of film making that I have ever felt the need for a field monitor and in this case, the additional (counter) weight is a blessing! 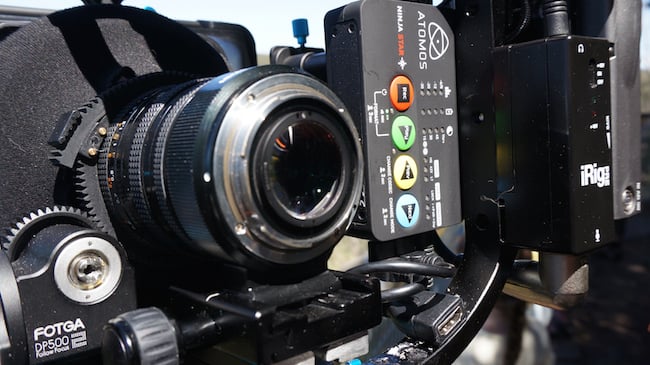 The Sony VG20 is a ‘hybrid’ camera so it shoots excellent RAW stills in 4:3 format with up to 16megapixels from the APS-C sensor yet it can be switched instantly to shoot video at a number of different frame rates. Remarkably, for such an early model, the camera can be configured to record internally in one HD format yet offer a different signal out its HDMI port. For example, I can shoot 50P internally, yet simultaneously output 50i or 25P from HDMI to the Ninja Star. My movement tests indicate that outputting 50i to the Star and using its internal ‘pulldown’ feature to create ProRes 25P results in far smoother motion interpolation than does recording 25P direct. This setup gives me a couple of great advantages in post: I transcode the VG20’s internal 50P to ProRes 25P using ClipToolz PTS speed change method which results in superior 50% slow motion with timecode. The Ninja Star’s external 25P recording derived from the camera’s 50i HDMI can quickly be re-wraped to include a manually set timecode with ClipToolz too so I get two almost identically timed ProRes recordings which allows for some very creative post production.