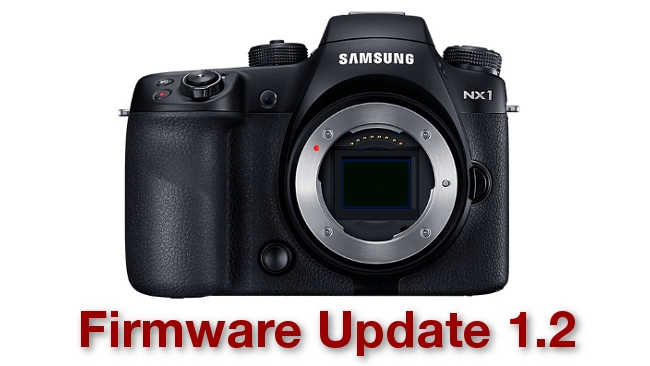 Samsung appears to be listening to its users' concerns in preparing a new firmware update for its NX1 4K camera that adds a bevy of features, many aimed at video shooters.

Samsung didn't debut a brand new 4K camera for this year's CES, but it did exhibit its 4K mirrorless camera in a compact body, the NX1. But the units on hand at the Samsung CES booth are likely better than the ones currently out in the wild.

At CES 2015, Samsung unveiled Frimware Version 1.2 for the NX1. Although not yet ready for public release, this forthcoming update drastically improves functionality, especially for anyone shooting video.

For pro users who require free run timecode, this option has also been added, but you'll need to run video out to an external recorder, like the Atomos Shogun, to enable this feature.

Rounding out the improvements for video shooters, gridlines, a center marker, and crop marks for 4:3 and 2.35:1 have also been added, as well as an 'action safe' option. Auto focus speed and 'responsiveness' can be fine-tuned as well via menu selection. Users may also adjust audio levels and ISO while capturing video, when such in-shot adjustments are necessary, and will also have the option of using a Bluetooth remote (instead of Wi-Fi) for shutter release and video start/stop.

For those coming to the NX1 from a camera by another manufacturer, Samsung has decided to make the physical button and dials customizable, meaning you can swap button functions and reverse dial directions to mirror a camera you may be accustomed to using.

These are the highlights for video shooters, but more improvements are packed into Samsung NX1 Firmware Version 1.2. For a more comprehensive list of improvements, including features for still shooters, check out Imaging Resource's recent article on the subject.

Firmware Version 1.2 for the Samsung NX1 should be available for download sometime in January, so current NX1 owners won't have long to wait for an immediately better and more useful camera. And those thinking of buying a Samsung NX1 might have less reasons for putting off the purchase.