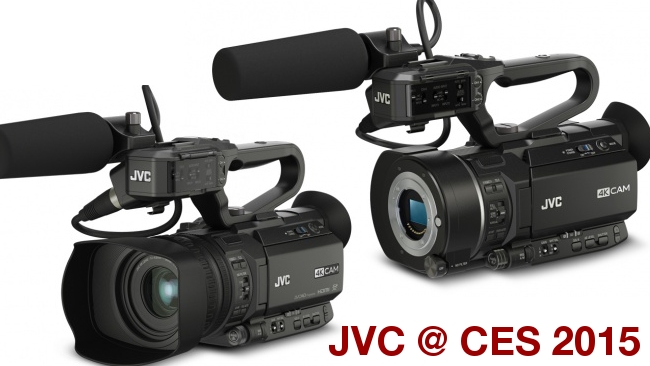 JVC is at the Conumser Electronic Show with two 4KCAM models slated for release in the next two months.

2014 was somehting of a watershed year for 4K cameras and 2015 is shaping up to be more of the same, as UHD capture is increasingly becoming the norm, even on the consumer side. At CES 2015, Sony introduced two new 4K cameras aimed at both the consumer or action videographer markets. Now, JVC is joining in on the act by showcasing two 4K cameras for prosumers and professionals.

Back in November of last year, we covered JVC's announcement of an entire line of 4K camcorders, set to debut in the following months. At this year's CES, JVC brought two of its forthcoming models to show off.

The first is the fixed lens GM-HM200, a classic-style prosumer camcorder:

The other camera JVC shown to exhibition-goers is the interchangeable lens GY-LS300, which ticks a lot of boxes for more professional use (at least on paper):

The model achieves this flexibility by adapting electronically the active area of its sensor to accomodate MFT, Super 16 and other lenses. JVC touts that "the GY-LS300’s Variable Scan Mapping is unique in the industry and gives filmmakers unprecedented flexibility"

The prosumer GY-HM200 will run you $2,995 and is set to ship in February, while the more pro-minded GY-LS300 has an MSRP of $4,450 and should arrive at your favorite retailer in March.