Some first impressions of the Letus Helix stabilized gimbal 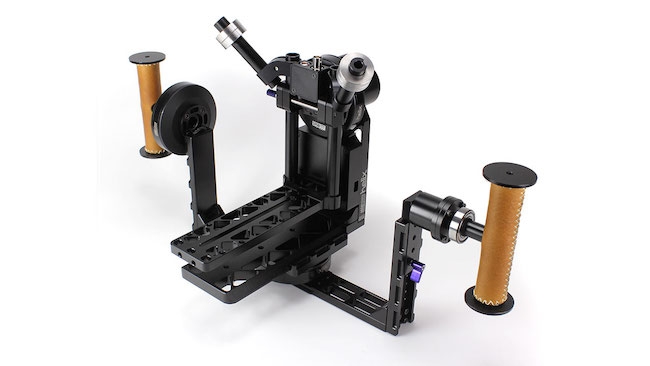 Since I had added the custom case to the order, my gimbal arrived in a Pelican case with custom cut foam. The case is fairly large, but the gimbal itself is pretty compact, not nearly as bulky as I'd expected. The build quality is what you'd expect from a company with Letus' reputation: great fit and finish, solid, and elegant. 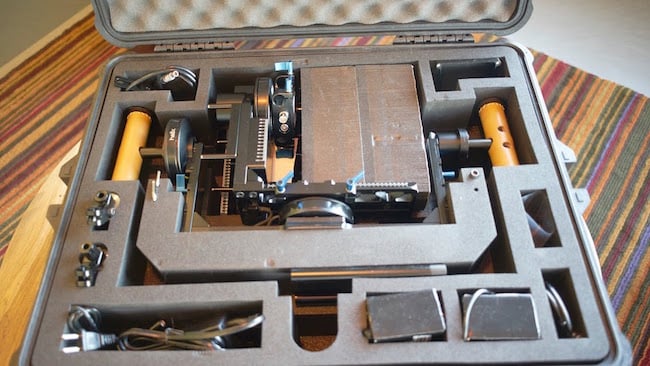 Following the video training Letus has in its Vimeo channel, I attached my BMCC to the tripod plate and started balancing the system. The camera attaches to a flat plate with a pair of 15mm rods in back. The rods slide into a clamp on the gimbal's body and secure with a set of four ratcheted thumb screws. I was able to get the camera almost balanced just by moving it up and down on the rods, and finally ended up adding one of the rods that Letus provides for counterweights. They look a bit like antennae, but one of the rods with a single counterweight was enough to balance the camera. After this the camera rotates freely.

Next task up is to balance the camera front to back. Letus shows a way to do this by removing the left handle and flipping the gimbal on its side. There is a set of thumb screws holding the bottom dovetail in place, so it’s a simple process to slide this back and forth gradually to dial it in. 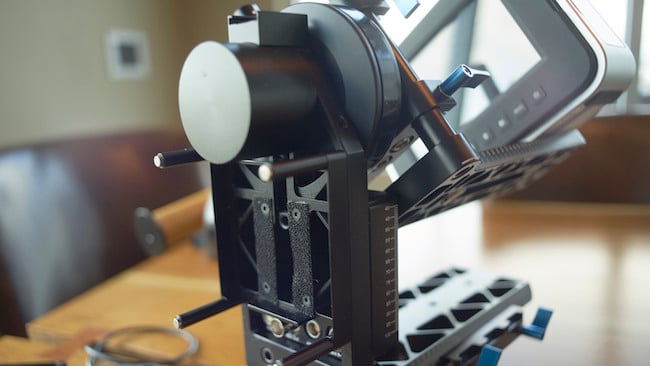 After this, the last step is to set the height of the handles. This is a bit more tricky, because if the gimbal isn't balanced, the camera will want to tip forward or backward when you lift it by the handles. It's fairly easy to stabilise the system by placing one's thumb on the inside of the motor connected to the right handle.

The first time I set this up I made the newbie mistake of leaving the gimbal a bit bottom heavy. When I tried to fly it, the horizontal worked fine, but the tilt motor struggled mightily, and started skipping when I tilted the gimbal even slightly. After I quick review I realised my mistake and rebalanced the handles. Once the handles are set correctly, you can lift it by the handles and tilt it, and it will stay where you leave it.

After that, I tried flying it again. This time, it worked a lot better. The camera stays level, and the tilt handle on the right side controls tilt. It's very intuitive.

I ordered my Helix with a dual power box, so it has three Lemo connectors in addition to an SDI port. The Juice Box, a 5200 mAh lithium ion battery connects to the back of the Helix, in the optional cage. Between the velcro on the front of the battery pack and the magnetic clasp, it's held on pretty securely when properly installed.

The joystick option is a good choice. I attached it to the left handle, leaving the right handle for tilt control, and the left handle for pan and roll control. Pressing the joystick button also triggers the menu, and is easier to get to than the menu button on the back of the gimbal. One tap toggles the motors on and off, and additional taps select one the up to four profiles that can be saved to the Helix. 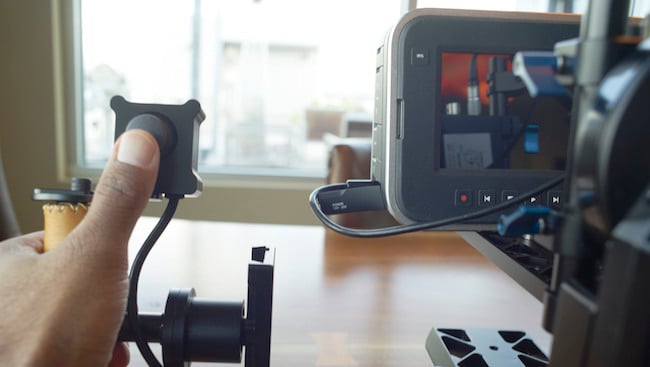 I opted for the Bluetooth option, so pairing the gimbal to my Surface tablet was easy. The basecam software that Letus provides connects to the Helix easily, and provides an interface for customising profiles, calibrating the battery and gyroscopes. It has displays showing the status and activity of the gimbal's motors and sensors, and provides an easy way update the Helix's firmware.

Since Letus was so quick to ship my Helix to me, I jumped on the chance to use it to film a scene from a short science fiction film. Footage filmed while walking turned out to be remarkably smooth. It does take some practice to develop a smooth gait for walking with a stabiliser, and as it turns out it's a gait very similar to the way one learns to walk in martial arts, something I happily have quite a bit of practice in.

Even with a 50mm lens on the Helix, movement was smooth. It's going to take some practice getting the framing right with such a long lens: in my first attempts I had a tendency to overshoot my frame and have to correct it, especially when using the joystick. The gimbal wants to dampen and smooth out pan and tilt movements, so it will take some time and practice getting that timing down in order to get the framing precise.

These are just first impressions of the Letus Helix; a more in depth review and sample footage will be forthcoming on Red Shark after I've had more time to practice wielding it.