We review the DJI Ronin - the more affordable motorized gimbal 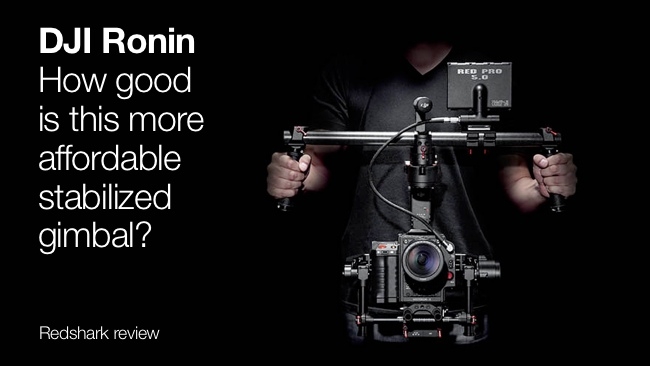 The DJI Ronin motorized, stabilized gimbal camera mount is creating quite a stir. It's much cheaper than other seemingly similar products

The Ronin 3-Axis Stabilized Handheld Gimbal System is DJI’s first handheld gimbal to support cameras of mid and relatively high weight, up to a maximum load of 7,25 kg (16lbs), and that is the main reason, why I believe this product has revolutionized the market of handheld stabilizers (i.e. gimbals).

I have been lucky enough to own this product almost from the day it was released,  and have tried it and many of its competitors since the hype around handheld gimbals first started around IBC 2013 and NAB 2014.

Whilst first-movers into the market like the MōVI M15 (Freefly Systems) have been constructed to carry about the same weight (6,8kg / 15 lbs) as the Ronin, they have been and are much more expensive ($11.995 MSRP; now down to about $5.000  - presumably because of the DJI Ronin) than the newly available Ronin ($2.999 MSRP).

Other products like the DIGImove TWO (12.995 € MSRP) are still relatively expensive and you have to wonder why.

I have tried out multiple products at trade shows (NAB, IBC and photokina) and have found my personal current favourite amongst them all: The DJI Ronin.

Although I am excited about the product I will try in the following article to present to you the plusses and minuses, as well as features and interesting facts about this product in a balanced way, in the light of my technical background and professional experience.

First of all I would like to mention that I have tried and tested the following set of cameras myself on multiple setups: Sony Alpha 7S, Sony F5 / F55, Canon 5D Mark III, Canon C300, Red Epic MX and Panasonic GH-4.

There are no noticeable shortcomings in the quality of the materials used to make the DJI Ronin. When you first use it, it is neither fiddly nor unwelcoming  nor impractical in any way.

The main body of the gimbal is made of aluminium alloy while the handlebar’s material is strong but lightweight carbon fibre.

The transport case has an intelligent and simple 4-sided handgrip and 4-latch closure system that is very practical and easy to use in the field. The attached telescopic handle is very firm, seems to be rugged and slides in and out perfectly.

The enclosure is of a strong and robust material and its soft interior design is highly structured and intuitive to use.

The size – although big – will fit well in most proper trunks (boots), even of passenger cars. But a single person will not easily carry out transportation of it on a bumpy or rough ground alone over a longer distance (Note: small wheels; designed for even or smooth surfaces). The whole thing is very heavy and broad in a car, but on the other hand, we didn’t have any problems transporting the product in the belly of an aircraft.

The gimbal itself is constructed on a well-researched and tested foundation, as a 3-axis stabilized gimbal system with brushless motors. 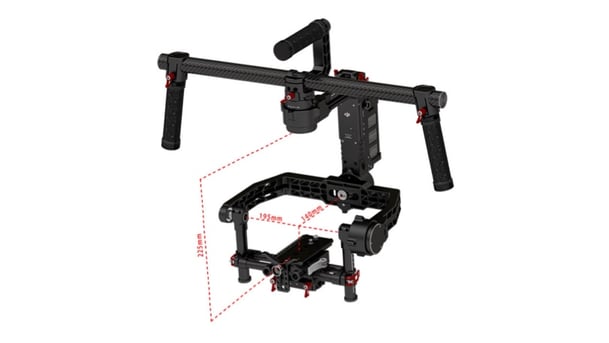 The Ronin will carry many different sizes and types of cameras as well as lenses from Micro-Four-Thirds to chip-sizes of the Red Epic. A wide range of camera setups including compendium, filters etc. may be used.

I can confirm that DJI’s so-called "simple 5-minute setup“ is just that, with one caution: The user has to understand the basic movements, adjustments and gimbal principles in the first place, not unreasonable for such a high-tech deice. Some users (employees and colleagues of mine) seem to just "get it", with balancing systems, and others don't.

The good thing actually is that the Ronin has tool-free balancing which I can definitely confirm works as expected. Also the first assembly of the handlebars through quick-releases and the proper and solid mounting slide are easy to use.

After basic setup, which ca be refined through the supplied DJI Assistant app (for iOS; Android app not available yet – but said to be available soon) or through a Bluetooth connection (built-in receiver and remote control) or DJI Assistant software running on both Windows and Mac and connected by USB cable, the Ronin is good to go.

The built-in ATS (Auto Tune Stability) helps to immediately and automatically adjust the gimbal with a single push of a button, depending on the camera weight - and adjusts the parameters and individual axes until the optimal configuration of the system is found.

Suspended Mode – Standard mode, where the gimbal and camera may be used hanging and thus can also be used very close to the ground to create spectacular camera movements. This is also the mode where the gimbal can be attached to a large flying platform like a big multi-copter or helicopter.

Briefcase Mode – When operating in narrow corridors or otherwise cramped compartments it may come in handy to use the Ronin sideways - just like a briefcase – which will use less horizontal space.

Upright Mode – Maybe used to either attach the gimbal to an upper side of a vehicle (e.g. car roof) or to any other bigger moving object and it is the easy way, to bring the camera closer to the eye-level of the camera man.

The system has a built-in DJI Remote Control receiver, so that the Ronin can be controlled by a second operator with an RC that is included in the box. This operator can concentrate fully on pan, tilt and roll of the camera while the gimbal operator controls the whole system by hand.

The joysticks are freely assignable and two configurable toggles switch between different speeds and between operational modes. Other remotes can be connected via the D-bus port.

Where would you use it?

I have tested the Ronin in a variety of environments, shooting stylized, short shots at concerts, running through the woods for action scenes, and creating a lively environment in a corporate film. To me, personally, the product is usable in almost all environments, as long as you can put it down after a short burst to recover your strength. You can use it anywhere if it is not raining or sandy. (Sand or water in the motors or the electronics will damage it permanently).

You can control the Ronin remotely with the supplied remote control unit over a distance of up to 100m or even 200m.

This should cover most circumstances.

I've  tried to be honest about the Ronin and I've listed as much about the negatives as seems reasonable.

Shooting with the gimbal, I would say that you will probably notice the noise of the motors when the stabilizer is operating. This can have an effect on audio recording.

Disassembling the product to fit it back into the transport case – to me – has not been solved ideally. You lose your correct handlebar positions and thus will have to reconfigure and reposition the gimbal and camera when you take the Ronin out of the transport case again on location.

The numbers and slide controls within DJI Assistant Software are not properly explained but easy to figure out, after a couple of tries. (Or you could read the proper explanations online, or in the manual (I prefer intuition!).

Almost everyone complains, so I have to state it here as well: Heaviness. The weight of the unit (9.26 lbs / 4.2 kg) becomes unwieldy if you use it on longer uninterrupted shots -depending of your stamina, training and strength of course.

The size and weight are a mixed blessing. It's big enough to be able to work with large cameras, but that limits the the ability of the human that has to carry it. Overall, it is probably an acceptable compromize as long as you understand and work within the limits.

The product is not waterproof and not dust-proof - but neither is its competitors - as far as I know. I just felt it necessary to mention because the product looks and feels very robust at first glance, which could be misinterpreted by the user, who might assume it is more resilient in wet and dusty/sandy conditions.

Since I own other DJI products as well, there is one thing that bothered my a lot: the battery system is not interchangeable with other DJI products. The Ronin battery is a 4S type and those for the Phantom 2 series are 3S. If you own multiple DJI products, it's a good idea to mark or tag the chargers, because they aren’t interchangeable and don’t have enough information printed on them, in my view.  For example: while they have different charging voltage and current the plug is the same! So, under stress, you might chose the wrong one and cause damage to your expensive battery packs.

If you have never used a gimbal before, please take your time to set up, try out and test the product under different conditions, in different environments and under stress as well. Don't take it onto a professional shoot without understanding how it works really well!