Big update for Blackmagic's URSA: "It's like having a whole new camera..." 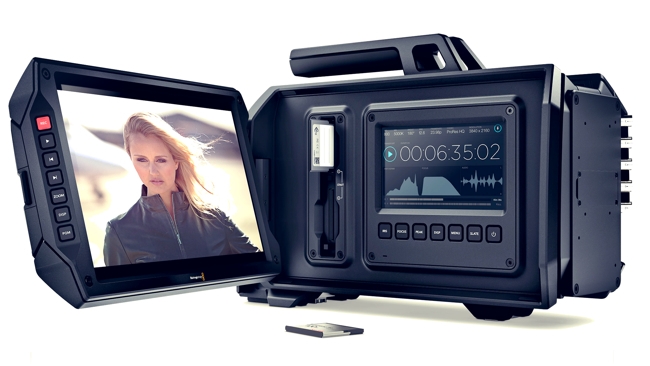 These days a simple software upgrade can transform your camera

The key new capabilities include 80fps recording, in RAW or ProRes, and visually lossless 12 bit compressed raw recording. There’s a new way to handle slow motion too: the sensor frame rate and the project frame rate are decoupled, so high speed footage can be previewed at normal playback speed for instant review of of slow motion.

Let’s look at these changes in more detail.

Modern sensors are often able to capture video at quite high frame rates, but the limiting factor is the data rates that these produce. Video at 4K is essentially an eight megapixel still every 24th/30th/60th/80th of a second. That quickly adds up to the point where it maxes out storage and even data pathways within the camera. It may also exceed the camera’s ability to process the data as it comes off the sensor. Still cameras have it much easier!

Alongside the new, higher frame rate of 80 fps the URSA’s been updated with a new compression format: RAW 3:1. This compresses the raw output from URSA’s sensor while retaining its quality (it’s visually, but not mathematically lossless) and reducing it in size by 50%. Blackmagic gives the following example: you can record seven minutes of raw onto a 128GB CFast card, but 14 minutes of RAW 3:1.

Visually lossless means just that. It’s just as good as compressed, unless you’re going to compare the difference after a very large number of generations.

URSA now makes a distinction between the Sensor Frame Rate and the Project Frame Rate. The latter is the rate at which the footage will be played back in the project - or in the final production. It is essentially the speed at which you will see the video in your editing system’s timeline - without doing anything with it - because the NLE will just see it as native 24p, 30p or whatever. It’s slow motion without having to process it.

The variable speed feature now goes way beyond this because frame rates can be selected from five to eighty fps in one frame increments.

The full Blackmagic Press release has more details and some good explanations of how this all works, so we’ve reproduced it over the page.

Blackmagic Design today announced Blackmagic Camera 1.9.9, a major software update with multiple new features for the Blackmagic URSA digital film camera. This new update has been developed in conjunction with the high end cinematographers that are using URSA cameras for high end work.

Blackmagic Camera 1.9.9 can be downloaded now from the Blackmagic Design web site.

One of the most powerful new features in Blackmagic Camera 1.9.9 is support for higher frame rate recording combined with the new menu control of recording frames rates for URSA cameras. This new software increases the recording frame rate up to 80 frames per second, which allows enhanced slow motion shooting with a more fluid feel to shots.

The frame rate settings in URSA have been changed and now the record frame rate is not limited by the video frame rate. This means customers can select the frame rate they want their work to be done, such as 24 frames per second for a feature film shoot, and then independently select the recording rate from 5 all the way up to 80 frames per second. The advantage of this is the URSA camera can shoot slow motion or fast motion shots but all the recorded video files are always set to the video rate, and you can see the effect of the higher or slower frame rate when playing. This means you can playback the exact same look on the cameras as the clips will play in a time line of editing software.

When shooting higher frame rates for high end feature films and television commercials, where image quality is critical, this new Blackmagic Camera 1.9.9 update includes a new CinemaDNG 12 bit RAW format that uses 3:1 compression to allow RAW files to be recorded in one third of the size of uncompressed RAW files allowing double the storage capacity on the same sized CFast card. This new compressed RAW 3:1 format allows higher frames to be recorded in the CFast cards, while retaining all the advantages of RAW recording, where the image processing in software such as DaVinci Resolve can get access to every single bit of quality from the sensor data in the camera.

Blackmagic Camera 1.9.9 also includes in camera formatting of CFast cards so when on a shoot, a computer is not needed to prepare CFast cards for use. Unlike formatting on a computer, the Blackmagic URSA camera technically analyzes the CFast card’s memory storage structure and will optimize formatting to allow best performance when used for real time digital film data recording. This means a card formatted in URSA can get much better performance than a card formatted on a computer.

This new software update also adds multiple new user interface changes to the Blackmagic URSA camera, including the new Dashboard menu screen allowing features such as formatting and other settings to be selected. Also included in the new user interface is scrolling menus. The new scrolling menus allow customers to slide their finger on the touch screens vertically to scroll through a longer list of settings in the menus, vital on a camera with so many features that can be customized by the cinematographer.

New menu settings included in Blackmagic Camera 1.9.9 includes on screen framing guides allowing a range of common feature film aspect ratios to be displayed on the fold out monitor, such as 2.35:1, 1.85:1 and more. These framing guides are displayed as translucent letterbox overlays and the opacity can also be adjusted by the user. Multiple other framing assistance guides can also be displayed.

“This is a massive update for all URSA customers,” said Grant Petty, CEO, Blackmagic Design. “There are so many new features in this software, it’s like having a whole new camera, just by updating the software! We have worked hard on this update and we think this software update is really showing off the power of the URSA hardware design and what it’s capable of doing. There is more to come!”