Expected to ship in mid-December with a $2900 price tag, DJI’s latest drone, the Inspire 1, raises the mid-range UAV bar impressively, boasting a 4K camera, 720p HD streaming and an optional dual-operator control; one for flying, one for controlling the camera.

Probably the most visually arresting things about the new drone are its carbon fibre struts which mount the four helicopter blades and serve as landing gear, but then lift out of the way once the unit is aerial to give the camera a complete 360º view.

And it’s a camera that definitely deserves a good view too. The Inspire 1 features a wholly new 1/2.3 inch CMOS sensor built-in camera and gimbal system from the manufacturer that provides 4K at 24-30 fps, 1080p at up to an impressive 60fps, or 12 megapixel stills. It’s mounted on a 3-axis, 360⁰ rotating gimbal, provides a 94⁰ wide-angle FOV and, what’s more, is removable for future upgrades.

This is all driven from a new remote control which can mount screens that stream 720p from up to 2km away — further away, in fact, than the flight envelope you’re legally allowed to operate — thanks to an improvement in DJI’s Lightbridge technology. The control has also been rebuilt with dedicated controls for the shutter, camera settings and more on the shoulders of the unit. But the headline addition is probably that of dual-operator control, allowing one person to pilot the flight path while the other aims the gimbal and camera. This promises to dramatically ramp up the creative possibilities of what can be done with the unit and makes it a serious proposition for broadcast use in particular. 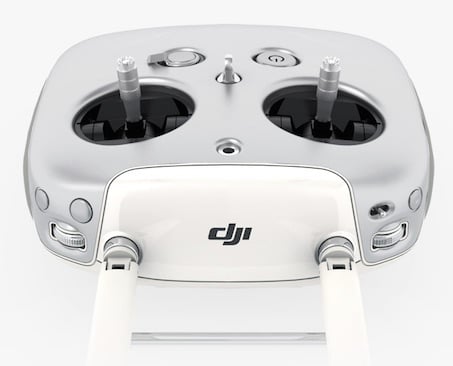 Other cool new stuff includes a vision positioning system that simplifies indoor flying via a combination of dedicated camera and sonar that allows the Inspire to hold its position, stop when the controls are released, and respond to commands even when GPS is unavailable. And Dynamic Home Point automatically refreshes the ‘return to land’ point, which is rather useful if the operators are travelling behind the drone in a car or boat and the 18 minute flight time is nearing an end.

All in all it’s an impressive leap forward. Yes, it’s more expensive than many of DJI’s previous prosumer models, but it also dramatically extends the capabilities of what you can do at that $3k pricepoint. It will definitely be interesting to see what users make of them, and what footage appears online, once they start taking to the skies in droves.